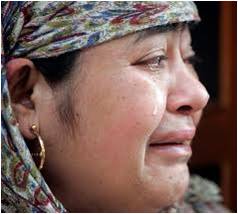 The Indian Parliament is celebrating sixty years of its coming into being. On the occasion, the country’s parliamentarians are reiterating their faith in democracy, not to speak of having evolved into the largest democracy of the world. At the same time, there are those with a strong sense of propriety who admit to ideological lapses and shortcomings. All in all, there is a feeling of being abashed amongst all the bonhomie and self-congratulation. There is a realisation that democracy, though firmly established, is not as strong at the grass roots as it should be. Within this introspection, a comment by leader of the opposition in the Rajya Sabha, Mr. Arun Jaitley, that terrorism and insurgency are too

serious as issues to play politics with, gains significance.

This statement immediately brings into mind the political leadership of Jammu and Kashmir. The state, in addition to being terrorism and insurgency ridden, seems to be afflicted with a huge deficit of leadership. Politics in the state continue to be driven be personal agendas with the stake holders constantly on a look out to for opportunities to make brownie points. The modus operandi is to resort to sloganeering based on half-baked information with the intention to whip up passions.

The state has been through a tumultuous period spanning more than two decades. During this period, restoration of peace and containing the menace of foreign sponsored terrorism was the top priority, and rightly so. As a result, day to day functioning of the state administration took a back seat. Terrorism brought the economy to a virtual standstill and provision of aid by the centre became a necessity. Unfortunately, the people become used to surviving on dole from the centre, leading to a complete degeneration of civic ethos. People started believing that the state owes to them some kind of indemnity in return of which they are free to give a complete go-by to their responsibilities and duties as citizens.

This attitude has not come about congenitally, it is the result of the environment in which they have been born and nurtured; the violence and turmoil that they have constantly been subjected to. Unfortunately, their beliefs are based less on societal norms and more on what their political leaders have fed to them in the most sensitive period of their lives.

In the political arena of the state, the manner of expressing an opinion may differ but issues remain the same. Ironically, these mostly deal with lamenting against the same central government on whose bounty the state virtually exists. The lament further takes in its fold the security forces on whom the very survival of the state is dependent. While the faction canadian cialis in power takes delight in presenting itself as a victim at the hands of the centre, the opposition reviles this very faction for having failed to deliver the so called political aspirations of the people. The separatists, in the meanwhile, concentrate on fostering as much chaos and mayhem as is possible while pretending to be the heroes of an illusionary mass movement for liberation of the state from India. The basic needs of the common man are virtually forgotten in this melee.

Since the security forces are the most visible symbol of the centre, the army remains the favourite punching bag of all and sundry. This riling against the real and imagined excesses of the security forces, despite all that they have done to restore normalcy, is a sign of the rot and the frustration that has crept into the political system. Continual and mindless bashing of all that is responsible for sustaining of the identity of the state is nothing more than lack of political acumen and foresight.

It is understandable that a state of conflict can lead to a narrow vision, however, as the political atmosphere evolves the leadership must also open itself to newer ideas and larger issues which keep into consideration both regional as well as national concerns. It is natural to expect that, as a community advances, so should its leaders. The issues of import change from being purely emotive, to ideological, to pragmatic. It is only through this process that the community can achieve the characteristics of a sane, responsible, civil society. If the leadership refuses to be nothing more than rabble-rousers, then the people that they lead are doomed for sure. That is the sad case of Jammu and Kashmir.

Aid in millions has been pumped into the state without any accountability and, more unfortunately, without any tangible development on ground. Today, there are more than six hundred thousand unemployed youth in the state; a number of those employed are reported to have submitted fake documents to gain employment, such is the level of the political rot. Recruitment rallies see thousands of candidates vying for a few seats and they mostly degenerate into arson when a multitude of candidates realise that they do not stand a chance. This is the level of frustration that exists among the youth of the state.

It is heartening to see conditions which give space to the political leadership to assert itself after two plus decades of turbulence. But should not the agenda be forward looking instead of clutching at historic straws? Chief Minister Omar Abdullah constantly dwells on the need to address ‘political issues of Jammu and Kashmir politically’. This cannot be denied, but then is not the Indian polity giving a clear message in elections that good governance is the mantra for good politics? So how can the two be separated? Why should the people of Kashmir be thinking differently? It is time for the dumb and visionless politics of the state to be replaced with some forward looking, mature ideas. It is time for the Kashmiri leadership to stand up and take responsibility of their constituency, their state and their country.