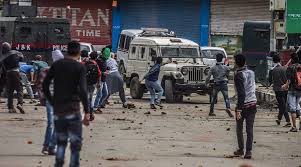 The Bharatiya Janata Party (BJP) led central government’s decision to announce “suspension of operations” (ceasefire) in Jammu and Kashmir during the Muslim holy month of Ramadan is a well-intentioned move, taken primarily to please its coalition partner, the People’s Democratic Party (PDP).

Ceasefire may sound good politically, but all political decisions do not necessarily lead to good results. It is universally accepted that ceasefire is workable only if both the warring parties agree to it. Holding a ceasefire unilaterally against mercenaries and criminal terrorists is akin to waving a white flag.

There is a perceptible effort by the government, ever since the inception of the move, to showcase it as successful. The situation on ground, however, contradicts this perception. There is incessant shelling in the Jammu region by Pakistan that has killed many and displaced lakhs of people. Within this period, in Kashmir, there have been incidents of Grenade lobbing, snatching of rifles from by terrorists from police personnel and an Army vehicle has been blasted in an IED attack. There is a report of five terrorist recently killed while attempting infiltration even as the Army has said that many are awaiting their turn to cross the border.

It is amply clear that terrorists and separatists do not understand the language of peace and have little regard for the safety and well-being of the common people. The separatist leaders are undeniably the biggest disruptive forces who have, time and again, shown their true colour by obstructing the peace process.

One hopes that the country will not be called upon to pay a heavy price for this unilateral decision which has already been met with disdain by terrorists and separatists and about which many experts and expressed inhibition.

The Armed Forces have been staking their lives and making countless sacrifices since militancy and terrorism erupted in Jammu and Kashmir in the late eighties. According to the South Asia Terrorism Portal (SATP), 6,387 Indian soldiers have laid down their lives (till May 13, 2018) since 1988 when militancy raised its ugly head in Kashmir. During the same period, 14,828 innocent civilians have also lost their lives. In the last 30 years, Indian soldiers have neutralised 23,423 terrorists.

These figures speak for the valour of the security personnel who did not flinch in shedding their blood to rid the region from the scourge of foreign sponsored terrorism. At a time, when the Armed Forces were in hot pursuit against the terrorists the “suspension of operations” definitely came as a dampener.

Already 30 Indian soldiers have been martyred in Kashmir since January this year as against 72 terrorists killed. The figures show the terrorists continue to exhibit a certain degree of lethality that can result in high casualty ratios for the security forces. Any leniency at this stage is bound to demoralise the forces. At the higher officer level the forces may be maintaining a brave front in the face of a government decision, but  whether those who do the actual fighting are happy with the same or not is something that has not been articulated upon, media has failed to take an opinion from the rank and file.

Has the pain and agony of the security personnel who endanger their lives been factored into this decision? Did the government take into account the fears of security forces that the militants may recoup during the one month period which may only allow the terrorists to re-energise? The need of the hour was to maintain the pressure on the terrorists whose morale is low, how will this sudden U-turn affect this need?

The fact that the government’s peace overtures have often been junked by the Jihadi elements was certainly lost on Jammu and Kashmir Chief Minister Mehbooba Mufti, when she made an appeal to Prime Minister Narendra Modi to take a leaf out of the book of the Atal Bihari Vajpayee led NDA government, which also went in for a unhelpful ceasefire in the year 2000.

Ever since the announcement has been made, many have attempted to jog her memory with reference to the abortive bid made by the LeT to storm the Srinagar airport immediately after the year 2000 ceasefire was announced. Security experts are fearful that something equally big might be planned within this month too.

Already there have been 48 infiltration bids from across the border till April this year, of which 24 attempts have been successful. Pakistan just cannot resist the temptation to push in as many terrorists as it can by taking advantage of the weather. Moreover, it will do all it can to force Indian security personnel to retaliate so as to put them into poor light. As long as Pakistan does not become party to the ceasefire and follows it in letter and spirit, the initiative holds no water.

The fight against terrorism cannot be successful with such knee-jerk reactions that the adversary uses to its advantage in his proxy war against the country. In order to win the war against terrorism, one will have to keep in mind that it cannot be contained; it has to be stamped out completely. We have a perfect example in Punjab!! Smarting under humiliating defeats, Pakistan took advantage of the simmering situation in Punjab and played host to a very strong Khalistani movement. Not only did it shelter Khalistani militants it also financed and trained them. It was only with the heavy hand that the militancy was wiped out in the state, the losses were many but at least peace prevailed. Why cannot the same approach be applied to Kashmir where we are dealing with criminal terrorists, not militant?

There is an undeclared war in Kashmir which has taken the toll of thousands of innocent lives. The government of India should not and cannot be lenient to the mercenaries who are out to disturb the social fabric of the country. It cannot let down its people and its security forces.