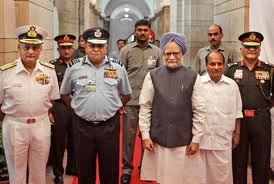 Prime Minister Manmohan Singh reviewed the security situation on his return from Afghanistan. In the course of the high level meeting, the three service chiefs provided to him their assessment of the security situation in the aftermath of the killing of Osama bin Laden in Pakistan. Despite the Prime Minister’s declaration in Afghanistan that India will not conduct a US like operation on Pakistani soil, Pakistan’s Inter-Services Intelligence (ISI) chief Ahmed Shuja Pasha has warned India that an Abbottabad-like operation would invite a fitting response, with Pakistani armed forces having “identified” specific targets and carried out “rehearsals” to attack them. Chinese military presence in Pakistani occupied Kashmir in the guise of engineering workers and the threat posed neighbour to the security of Jammu and Kashmir State was also discussed.

It would have been appropriate for the Prime Minister to have held this meeting before proceeding to Afghanistan in which case he may have refrained from taking a passive view of engaging a belligerent Pakistan. The combative response of the Pak ISI Chief is indication enough that  our policy of appeasement is not likely to amount to much.