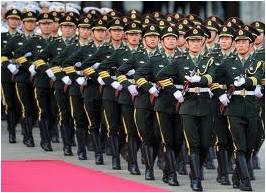 China continues to be an enigma for India as also the international community. Not much is known about the policies of the communist regime since the leadership keeps its counsel close to its heart. However, there are three aspects on which there is no difference of opinion. First, China has become a dominant player in the global arena, it has considerable financial clout, a formidable nuclear enabled military strength, and a fairly well developed technological base. Second, China is driven by economic considerations; its focus is on attaining a premier position in the world economy. Its relationships with other countries are guided primarily by this core objective. Third, China has never deterred from leveraging the power of its Peoples Liberation Army (PLA) if the need is felt. The contribution being made by the PLA in furthering the political and financial interests of China is, by no means, insignificant.

The PRC then declared its policy of liberating all Chinese territories, including Tibet, Xinjiang, Hainan and Taiwan. Tibet had been functioning as an independent principality under the Dalai Lama but with suzerainty in the hands of the Chinese Qing Dynasty since 1724.The Dalai Lama became an independent ruler of Tibet post the fall of the Chinese empire and rise of the Republic of China in 1911-12.

The PRC did not lose much time in getting Tibet under its control. On October, 07, 1950 some 40,000 troops of the PLA captured Tibet’s Eastern Province of Chamdo after defeating the small Tibetan force stationed over there. By September, 09, 1951 more than 20000 troops of the PLA had marched into Lhasa. The military control of Tibet was virtually complete and what followed was several years of brutal suppression. By 1954, Prime Minister Jawahar Lal Nehru had, through the infamous Pancheel Agreement, accepted Tibet as a region of China. In 1959, in the aftermath of what is termed as the Lhasa rebellion, the Dalai Lama fled from Lhasa and after a difficult journey through treacherous terrain resurfaced at the Twang Buddhist Monastery in India. He was ultimately given asylum in Dharamshala where he established the Tibetan government in exile and launched a crusade for the liberation of his people from the Chinese yolk. Soon after the Dalai Lama’s exodus, Tibet was incorporated into the PRC, the Tibetan government was abolished, the eastern areas were merged with the Chinese provinces of Sichuan and Qinghai and the western and central provinces came under the direct governance of the PRC as the Tibet Autonomous region. All this was done by blatant use of the might of the PLA.

The brutal subjugation of Tibet was running in tandem with the open support that China was extending to the communist North Korea in what is termed as the proxy Korean War between the US (under the aegis of the United Nations) and the PLA. The North Korean forces invaded South Korea across the 38th parallel on June, 25, 1950. This attack was repelled by the US forces operating under the banner of the United Nations. As the North Korean forces were driven across the 38th parallel with the US forces gaining ground almost up to the Yalu river (which in effect meant the complete annexation of North Korea) the PLA got into the fray and drove the US forces back to the 38th parallel, which even today serves as the border between the two Koreas. Thus, the PLA showed its teeth in what is termed as the first conflict of the cold war era.

Coming back to the situation on Indian borders, with Tibet in its control China established direct borders with India and became assertive about its claims on the areas of Sikkim and Arunachal Pradesh. China turned its aggression into outright War in 1962 and overwhelmed the Indian forces numerically and in terms of equipment and war preparedness. China had, by the end of the War, achieved its military objectives of de facto control over Aksai Chin and it has, since then, continued to lay claim on the India territories in Sikkim and Arunachal Pradesh.

The PLA has exhibited a unique brutality in subjugating internal dissension as was seen in the Tiananmen Square massacre on June, 03-04, 1989. 27th and 28th divisions of the PLA moved into Tiananmen Square on foot and in tanks. The troops came in with rifles, bayonets fixed even as tanks rumbled down the street, firing indiscriminately. The exact toll of the bloodbath took is not known, the estimate runs from about 800 to a couple of thousands. This incident changed the face of China forever since a large number of families were devastated during after having lost their only child. Now there are a number of stories coming out about atrocities being committed by the PLA against the Muslims of the Xingjian province.

It is amply clear that while keeping economic interests paramount the PRC is not averse to brutally using the formidable military might of the PLA wherever and whenever it feels the need to do so. As China grows in influence and economic muscle so will grow its ambitions and it will attempt to resolve its problems in a more aggressive manner. It would bode well for India to remain prepared for such an eventuality both diplomatically and militarily.