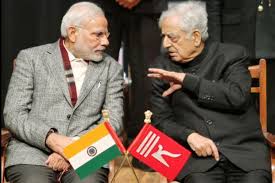 The state of Jammu and Kashmir is grappling with the untimely demise of one of its tallest leaders of all times, Mufti Mohammad Sayeed. There are volumes being written about the man that he was. He is being hailed as experienced leader who gave prime importance only to the good of the state and its people, a patriot and nationalist to the core, he was known for his political astuteness and wide acceptability. Mufti Sahab was a visionary, a strategist, a great believer of the Indian state and above all a humanist.

In his first tenure as Chief Minister, he valiantly took the mantle of providing a “healing touch’ to the people of Jammu and Kashmir, for long battered by the cult of violence. His belief manifested itself in the slogan, ‘Na grenade se, na goli se, baat banegei boli se’ (not with a grenade, nor with a bullet, things will work out only with talks), which led then Prime Minsiter Atal Bihari Vajpayee to make the famous Lahore bus journey.

He crafted a, ‘surrender and rehabilitation policy’ for such misguided youth of the state who had been indoctrinated into following the path of terrorism and who were ready to shun violence to lead a normal life with their families was put in place and peace started creeping  back to the valley. As expected, the policy had many critics and detractors but ultimately its wisdom was understood and it was adopted by the Union government.

Poised for his second tenure as Chief Minister of the state, Mufti Sahab faced an even bigger challenge of choosing a coalition partner from among a host of parties that were falling over themselves to render support. It was perhaps the biggest decision that was required to be taken by a political leader.

Mufti Sahab chose to follow the path of justice and righteousness even when all political odds were stacked against choosing such a path. He had formed his own party, the Peoples Democratic Party (PDP) with the express objective of fulfilling the aspirations of his people. At a juncture when the very unity and cohesiveness of his state was at stake he knew that he would have to follow the aspirations mandated by the people regardless of the consequences to his own political career and identity, and he did just that.

He chose to give the Bharatiya Janata Party (BJP) that had won conclusively in the Jammu region, a chance to work for the people who had voted for it in large numbers. In so doing he put his own ideology on the backseat and agreed for an “alliance of the North and South poles” only for the good of the state.

There is no other leader in Jammu and Kashmir, or any other state of the country for that matter, who would take such a big political risk only to uphold democratic norms and the mandate of the people.  In doing so Mufti Sahib proved himself to be a Statesman par excellence.

Mufti Sahab did this due to his complete trust in the support of the cadre of his party who had braved so many odds in getting him to power. He knew that there would be dissension but was sure that his people would understand the wisdom behind his decision.

The coalition done, Mufti Sahab directed his indefatigable energy towards making it a success. At the cost of his health, he worked ceaselessly for the sake of the people. He used his vast experience to reduce the trust deficit between the two “poles” of his government and make them work on the common agenda of development.

His work was made difficult by the inexperience of the BJP MLA’s and ministers, most of who were green horns in governance and statecraft, yet, he did not relent and moved forward with utmost optimism.

Slowly and painstakingly, his labour started bearing fruit. Development funds started flowing into the state as projects were sanctioned in a fast paced manner. Today there are many government initiated projects already underway in the state; structuring of institutions of excellence like AIIMS, IIT, Central University etc; rebuilding of the flood hit houses of Srinagar city and its outskirts; construction of the Zozilla tunnel; alternate road connectivity via Sudh Mahadev to Bhaderwah; redevelopment of the old city of Srinagar, development of Pir Panchal and the Chenab Valley and making Jammu an Independent Tourist destination to name just a few. The projects are touching all aspects of development from infrastructure to poverty alleviation to human resource development.

Such is the confidence that has been generated that the central government is addressing the issue of talks with Pakistan on a much more confident note than ever before.

Prime Minister Narendra Modi has personally made sincere effort to reach out to the people by visiting the state on many occasions. On all occasions he spoke highly of the government led by Mufti Mohammad Sayeed.

The unfortunate demise of Mufti Mohammad Sayeed has given rise to speculation about the future of the PDP-BJP coalition.  The more sage and experienced voices, however, are rooting against any such precipitate decision. Not only would it constitute a deviation from the legacy left by Mufti Sahab, it would also engineer turmoil in the state at a time when stability is necessary to fill the void caused by the sudden death of its tallest leader.

It is also important for the government in the centre to extend extraordinary support to the state at this sensitive point in time. A good way to do so would be to expedite the pace of development by releasing more funds.

“Mufti Sahab’s demise leaves a huge void in the nations,” tweeted the visibly agitated Prime Minister Modi on hearing the sad news. This is a clear message that the void created by the demise of Mufti Sahab needs to be filled in the manner that he would approve. Mufti Sahab was a great survivor; it has to be ensured that his legacy survives now that he is not amongst us. The entire rank and file of his party, PDP,  stands behind Mehbooba Ji to help her fulfil Mufti Sahas legacy and the unfinished tasks of his dreams of making “Jammu & Kashmir an Island of Peace and a bridge between the two neighbours”.