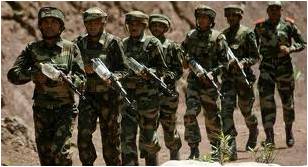 Consequent to various news reports and public debates on the Pathribal case, I decided to venture into the provisions of lessor known system of dispensation of justice in the Army. It may be recalled that on May, 01, 2012 the Supreme Court of India ruled in the Pathribal case that the first option with regard to proceeding against the alleged accused persons rests with Army and if the Army does not take over the case for proceeding under the Army Act then the CBI should approach the central government for seeking sanction for their trial in a criminal court. The very fact that the law of the land confers the discretion on competent military authority to choose between court martial and trial by criminal court means that the system has as much faith in trials by court martial as that by a criminal court. The Army has, ever since independence, been governed under the jurisdiction of the Army Act and other service rules and regulations.

There has been no reason seen to change the system and, over the years, justice has been delivered under the said act with defaulters being punished expeditiously and in a manner which is exemplary. In fact, the conviction rate by court martial is much higher than criminal courts, which is because the Army insists on maintaining the highest standards of discipline even at the cost of sometimes being harsh. Under the Army Act a reasonably fair system for dispensation of justice has been provided. Even though the code of criminal procedure may not apply as such to trials by court martial but the laid down system conforms to the law of the land. The military judicial system is fair not only to the accused but also to the victim and the organisation.

With regard to the Pathribal case, the Supreme Court has directed that if the Army takes over the case then the same must be dealt with expeditiously in accordance with law. Having taken over the case the procedure under the Army Act provides that the competent authority first convenes proceedings to investigate the charges filed by the CBI. To facilitate this, the competent authority will constitute a board of officers to record a summary of evidence to establish that the charges hold merit enough for the accused to be tried by a court martial. All witnesses who were examined by the CBI and such other witnesses whom the constituted board of officers or the accused persons desire to be examine will have to be summoned to give their statements.

The summary of evidence once completed will be put up to the convening officer who is also the competent authority to order a trial by court martial. The document will be scrutinised by the legal department of the Army and if it is so established that there exists a prima-facie case against the accused persons then recommendation is given to the convening officer/competent authority to give orders for convening of a court martial. The consequent general or summary general court martial that the competent authority may convene has the power to try out all offences, including those investigated by the CBI. The court martial has powers akin to a sessions court and can even award sentences going up to death in deserving cases. At every court martial, not only the prosecution but even the accused persons are entitled to engage civilian counsel.

It is a fallacy to say that court martials are a secret affairs and the results thereof are not known to the public at large. A court martial, like a criminal trial, is an open court to which the public generally may have access provided that the court is satisfied about its necessity in public interest or for the ends of justice. This apart, the court may at any stage of the trial order that the public generally or any portion thereof or any particular person be denied access to the place in which the Court is in session.

It would be pertinent to mention that at no point of time has the Army stated that these persons enjoy immunity from trial. The stance of the Army and Ministry of Defence all along has been that it was a joint operation between the army and the local police and these persons acted in good faith in the discharge of their duties and hence, the CBI was required to take prior sanction of the Central Government before instituting prosecution or any other legal proceeding against them. It is the insistence of the CBI to proceed with the trial without the sanction of the government, due to reasons best known to the organisation, which has led to the case being stretched the way it has over so many years. In fact, the CBI being a part and parcel of the very government which has passed the Armed Forces Special Powers Act to give protection to central government forces functioning in insurgency and terror prone areas should have followed government sanctioned procedures in the first case; why it did not do so and why the central government did not insist that it does so is an issue which needs to be dwelled on..

The Army has an immaculate image and a good track record in expeditions and fair dispensation of justice and we expect that even the Pathribal case would be fairly taken to its logical conclusion. This will happen only if the State government gives its unremitting support in the recording of the summary of evidence and the subsequent trial by court martial if it is deemed to be necessary. It can only be hoped that justice will prevail in the end and no person who was performing his duty without any prejudice is held on the dock for some extraneous reasons.