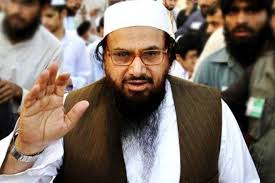 Pakistan’s propaganda against India is a 24/7 feature! It, however, peaks in the month of February with the sham of “Kashmir Solidarity Day” (KSD), an annual ritual since 1990 being observed on 05, February. The stated objective of this sham is to support the so-called struggle towards self-determination of the people of Jammu and Kashmir.  The actual intention is downright propaganda. As the sham of KSD culminates, the separatists are put to task by their Pakistani masters to orchestrate a disgusting exploitation of the deaths of Maqbool Bhat and Afzal Guru by creating a political disruption in Kashmir. The evil actions are supported from across the border with a spike in ceasefire violations and terrorist strikes in the hinterland.

The Kashmir Solidarity Day, this year saw the terrorist, Hafiz Saeed, it his vitriolic best, openly spouting venom against India at a rally held in Lahore. His disgusting anti-India rhetoric and open incitement to the Kashmiris’ to revolt against their own country was of such a debased degree that the Indian Ministry of External Affairs was compelled to send a Note Verbale to the Pakistan High Commission in India registering a “strong protest at the continued use of Pakistan controlled territory by extremist and terrorist elements” to “freely propagate and promote violence and terror against India.” Note Verbale is a diplomatic protest made by one country to another to express annoyance over some issue.

The issue played out in far off London too where attempts by Pakistan’s Inter Services Intelligence (ISI) to mobilise support to internationally demonise India fell flat. A Pakistan sponsored event in the House of Commons witnessed strong protests by the London based Dogra and Kashmiri Pundit communities strongly supported by the Pakistan Occupied Jammu and Kashmir (POJK) Diaspora. A delegation of POJK demonstrating against the observance of Kashmir Solidarity Day and Pakistan’s atrocities was told to leave the House of Commons amidst protests in their favour from some Parliamentarians. The Dogra’s and Kashmiri Pundits standing outside were not allowed entry at all and nor was Indian media. Despite all this, the protestors made their presence felt by their unity of purpose. Undoubtedly, the British law makers would have realised the true picture of Human Rights violation by Pakistan in territories of the erstwhile Dogra kingdom of Jammu and Kashmir that are under its occupation.

With the sham exercise of solidarity falling flat, the next prong of the propaganda is already in place. The so-called Joint Resistance Leadership (JRL), a grandiose name coined by the marginalised Hurriyat to keep its relevance alive, issued a protest calendar for 09 and 11 February. As usual, a demand has been made for return of their mortal remains accompanied by a march from Lal Chowk to the United Nations (UNMOGIP) office at Sonwar to submit some sort of a memorandum to the United Nations, an exercise whose worthlessness has been established since many decades. Their pathetic efforts will be covered by such segments of the media in Kashmir that is captive to the Pakistani establishment.

That the attempt is half hearted and simply a method to tick off an activity on the calendar is obvious from the lack of interest of the leadership. Except for giving a call for the protest Mirwaiz Umar Farooq and a large number of separatist leaders have remained silent on the subject.

These fans of Afzal Guru, who are now screaming their lungs out, were nowhere to be seen when he needed them the most? Those who are bending backwards to show allegiance with him did not raise a finger in his support while he was alive. They did not deem it necessary to provide Guru with the legal aid that he required while his case was being tried in court.

Maqbool Bhat entered the political arena of Kashmir with an ideology of Jammu and Kashmir existing as an independent state. Being young and impressionable, he came under the devious spell of Pakistan. He and his friends generated anti-India propaganda and committed a number of crimes, including hijacking and murder.

Since Maqbool Bhat spoke more and more about an independent Kashmir, free from both India and Pakistan, he became persona non grata for the Pakistani military establishment. He was forced to flee from Pakistan Occupied Kashmir (POK) back to Jammu and Kashmir where he was arrested for his crimes, tried as per law and sentenced to death.  So the very Pakistan that is now paying handsomely to use his name for propaganda forsook him when he was in need of support.

The people of Kashmir no longer hold the conviction that the separatists are genuine in their regard for Afzal Guru and Maqbool Bhat since they are brought out of the closet with an eerie regularity every year in the month of February and forgotten as soon as the Bandh and the march to the UNMOGIP are over and done with.

The folly of misguided ideologies of both Maqbool Bhat and Afzal Guru is very visible in contemporary Kashmir that is rooting for democracy and freedom as a part of India, the largest democracy of the world. Today, separatist organisations like the Hurriyat are facing a potent threat of being politically marginalised and are invoking the names of Bhat and Guru only to save themselves! They have made no attempt to ameliorate the emotional suffering of the families of the two for whom they profess undying respect and loyalty.

It is time to neutralise those who are making millions by politically exploiting the death of Maqbool Bhat and Afzal Guru. It is time to derail their evil agenda of using misinformation as a tool to soil the minds of the younger generation and drive them towards a self-destructive path as is being attempted by observance of Kashmir Solidarity Day.  It is equally important for the people of Kashmir to ensure that their young boys do not become prey to Pakistan’s vicious propaganda.

(Dr. Simrit Kahlon is an academician and a Geo-political analyst)