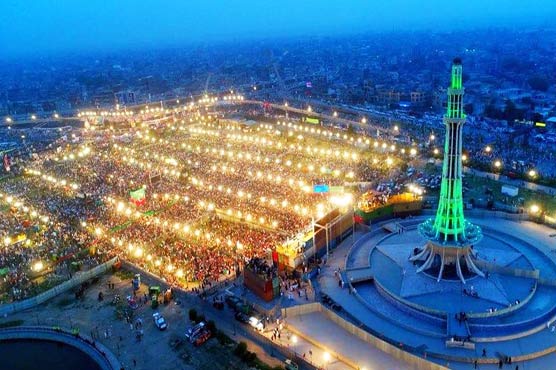 “Politics makes strange bed fellows” – this proverb, meaning that that political alliances in a common cause may bring together those of widely differing views, is today most applicable to Pakistan. Eleven political parties, including the PML (N) and the PPP that are sworn enemies have come together under an umbrella organisation named Pakistan Democratic Movement (PDM), created by another sworn political enemy, Maulana Fazal-ur-Rehman, the leader of the Jamait Ulema-e-Islam (F). The single point objective is to topple the government headed by Prime Minister Imran Khan.

The PML (N) hosted a massive Jalsa (rally) at the Minar-e-Pakistan, in Lahore on 13 December for all constituents of the PDM. Minar-e-Pakistan  is a national monument built in the 1960’s on the site where the All India Muslim League passed the Lahore Resolution on 23 March 1940. It is a preferred site for political rallies.

The beleaguered and besieged Imran Khan put in all possible effort to scuttle the rally. Permission was not provided by the Punjab government citing terror threat and the second wave COVID-19 pandemic.

Prime Minister Imran Khan himself ruled out the possibility of the government granting permission to the PDM for holding the rallies with warnings of legal cases against the organisers. “We will file FIRs against everyone from the Kursiwala (supplier of chairs) to the sound system handlers but won’t stop them (opposition leaders) from going there,” he said. Several political workers were arrested ahead of the rally, the government also flooded the Minar-e-Pakistan lawns to stop it. The arrests elicited widespread condemnation.

The Lahore police sent an advisory against holding a public gathering to PDM chief Maulana Fazlur Rehman, Maryam Nawaz, Bilawal Bhutto-Zardari among others. “TTP terrorists are coordinating to carry out a terrorist activity on 13 December, 2020. Although details regarding the place of terrorist activity and likely targets is not available, the date (13 December 2020) appears to be significant as a huge public gathering is expected at Minar-e-Pakistan,” said the advisory.

The PDM, however, remained undeterred and made massive preparations for the rally. A huge stage was erected and all essentials like lights and sound systems arranged much to the consternation of Imran Khan. PML (N) also put the responsibility for security on the shoulders of the Punjab Government.

Even though the organisers of the Jalsa had asked the attendees to reach the venue at 2 PM, hundreds of supports started gathering there early despite the cold weather, enthusiastically chanting slogans and carrying flags.

The many leaders who addressed the rally raised an unanimous voice against the incumbent government on issues of its legitimacy by stating that 2018 witnessed a fraud election that is not acceptable. “Due to the massive rigging in 2018 elections, Imran Khan was installed into power so that he could be easily dictated. Time has come to get freedom from this selected set-up,” said ousted former Prime Minister Nawaz  Sharif  in his address to the gathering through a video link. JUI-F chief and president of PDM, Maulana Fazlur Rehman, cautioned that growing resentment and anger of the people against the “illegitimate government” can lead to anarchy in the country. Bilawal Bhutto Zardari said that the PTI government is not cognisant of the difficulties being faced by masses “because it did not come into power through people’s mandate.”

More significantly, the leaders made a direct attack on the Pakistan Army by saying that the various elements of the state should function within the “limits of their own jurisdiction.” Maulana Fazlur Rehman openly urged the ‘establishment’ to stop meddling into the political affairs of the country and let the leaders chosen by the people govern the country. “If people’s rights are continued to be abrogated then the national unity cannot remain intact,” he warned. Such open criticism of the Army is being heard quite often in political circles in recent times. It is a new and welcome development.

Also raised were issues of burgeoning inflation and unemployment, whereby people are burdened with unchecked and spiralling prices of essentials like edible items, petrol and even medicines. “Ever since Covid-18 [PM Imran] has formed government, sugar, wheat, electricity and people’s livelihood have been quarantined,” said Maryam Nawaz Sharif while referring to Imran Khan as the “Tabedaar (obedient) Khan playing a fixed match.” The speakers said that Imran Khan was hand in glove with the mafia that is indulging in stocking of essential commodities leading to creation of false demands.

The one thing that comes out clearly from the massive rally is that the political leadership of Pakistan has finally felt the pulse of the people and garnered enough courage to unite and challenge the all powerful Pakistan Army. This is evident from the fact that they refer to the prime minister as a stooge of the establishment and say that all troubles in Pakistan are due to his inability to function freely.

Attacks on the beleaguered Imran Khan are going to increase in coming days. Next on the agenda of PDM is the tendering of mass resignations from the National Assembly by all members of the opposition. Such a move will make running of the government untenable for Khan who is trying to put up a brave face but can see the ground sliding away from under him.  PDM will also keep the momentum of mass agitations going.

The combined opposition seems to be determined to not only topple the Government being led by Imran Khan but also to free the country from the stranglehold of the Pakistan Army. It is something that Nawaz Sharif and other senior political leaders have wanted to do since long and is now becoming a reality. Pakistan is finally moving from virtual dictatorship to actual democracy. A change of this nature in the political ecosystem of Pakistan would benefit the country since true democracy has remained elusive since its creation as a Nation.

(Dr. Simrit Kahlon is an academician and a strategic analyst)