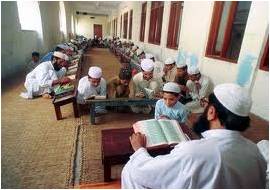 The role of education in Nation building needs no emphasis; the matter gains more significance in democracies in view of the unique set of values that need to be imbibed in future generations to keep the inclusive, tolerant, democratic and free system of governance going. A key requirement is that children learn to understand what democracy and freedom means and they learn to cherish values of truthfulness, honesty, responsibility, equality, justice, and peace that go with it. Education systems of most vibrant democracies have achieved the necessary interface between national values and culture. This, unfortunately, does not hold good for countries like Pakistan.

Pakistan has in place a federal ministry of education that is mandated to set the curriculum for pre-university study across the country. This ministry is also responsible for production of the text books that guide what is taught to the students in subjects like social studies, English, Urdu, civics etc from Class I to Class XII. A study by some independent groups in Pakistan has revealed that curricula and officially mandated textbooks contain material that is contrary to the goals and values of a progressive, moderate and democratic nation. The significant problems in the textbooks are many; factual inaccuracies that distort history; insensitivity to religious diversity; incitement to militancy and violence; encouragement for Jihad; encouragement towards prejudice, bigotry and discrimination towards women and religious minorities and towards other nations; glorification of war and the use of force. Above all, there is blatant omission of concepts, events and material that could encourage critical self awareness and positive, self confident nationalism.

In the most important curriculum for social studies, history is being narrated with distortions and omissions. The books on social studies systematically misrepresent events that have happened in Pakistan since its inception as a nation state including those which are within living memory of many people. The textbooks excessively emphasize the “post independence ideology of Pakistan” which outrageously sanctifies such sub-continental politics that are considered to have been inimical to the creation of Pakistan. This, by itself, leaves a strong anti-India sentiment in the impressionable minds of the children. Worse, the material is presented in ways that encourage the student to be hostile towards other nations, social groups and people, predominantly India. It is no wonder that in later stages of their lives these people they find it difficult to get rid of negative perceptions while relating to other countries and cultures.

Contrary to the declared vision of the founding father, Mohammed Ali Jinnah, Pakistan has been declared an Islamic state. As such, study of Islam is compulsory in the curriculum of all schools. The constitution of Pakistan requires compulsory reading of the Qur’an for Muslim students alone, but in complete disregard of this restriction, it is included in the textbooks of a compulsory subject like Urdu which is to be read by students of all religions. Quite incredibly, even books meant to teach English have religious content not to speak of the Urdu language texts. Thus the entre focus remains on religious teachings in a narrow perspective. The texts deliberately define nationalism in a manner that excludes non-Muslim Pakistanis from either being Pakistani nationals or from even being good human beings, thus going against the very basics of the concept of national integration.

What is being taught in the schools of Pakistan is but a minor part of the whole problem. The larger issue is the nearly 17000 registered and countless unregistered madrassas and seminaries which are providing education to the rural masses and in many cases even to the urban, educated elite and even foreigners with a bias towards religious fundamentalism. The moot point is that before the Zia-ul-Haq era there were hardly any madrassas visible in Pakistan, this sudden mushrooming is part of a deliberate plan to radicalise the society in tune with the military dictators overall game plan. The government of Pakistan has many plans, on paper, to demolish non registered madrassas but is hesitant to act for fear of a violent backlash like the Lal Masjid incident. Known to be incubators of violence, madrassas spread sectarian hatred to an extent that they do not allow pupils to look at alternative perspectives within the religious discourse; they spread this ideology not only to the students but through them to society at large.

There is no doubt that the government of Pakistan needs to act and act fast; the problem however, is the limited options that the government has. Closure of educational institutions is not an option and their reform also seems to be next to impossible. So far as the formal schooling is concerned one way forward is to leave the productions of text books to some autonomous educational bodies. This is difficult since repeated interventions from civilian governments have failed to overcome institutional resistance. Shutting down of madrassas is also not an option since the government does not have the means to provide alternate facilities for education.

Extremism is a fall out of the governments’ inability to provide quality secular and religious education to masses and this is not limited to madrassas alone as is the popular belief. Formal elementary education needs to take equal blame and this is the sole responsibility of the government. As a result, once a generation comes of age it either takes to Jihad or forms gangster like groups and student unions in colleges that are even more infamous for their antics than the Jihadis. The bottom line is that, in Pakistan, preaching of sectarian hatred, fatwa’s, glorifying murderers is firmly embedded; extremism has changed the very DNA structure of the nation and it is quite evident that education has a lot to do with this radicalisation of the society.