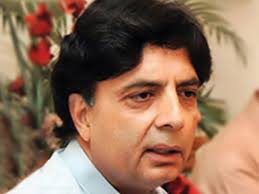 Pakistan’s Interior Minister Chaudhry Nisar Ali Khan is a very busy man these days, not because of the many terrorist and militant attacks taking place across his country, but because he is trying to churn out a national policy to counter terrorism. The policy that Pakistan has been working on is titled, “National Counter Terrorism and Extremism Policy 2013.” The interior minister has been given an all pervading mandate to draft the document and then get it approved from the plethora of agencies that are stake holders in the process.

As a first step in this direction the National Counter Terrorism Authority (Nacta). that was promulgated in December, 2012, by the previous government but has been dormant ever since, is being revived as the focal point for the internal security policy. The government is also planning to put in place a Counter Terrorism Rapid Deployment Force and create a joint intelligence secretariat representing all the civilian and military intelligence agencies like ISI, MI, IB, Special Branch and others to coordinate sharing of intelligence collected by various sources of information.

The draft new policy recently unveiled by the interior minister has five salient features – dismantle, contain, prevent, educate and re-integrate. It proposes to eliminate all terrorist networks through counter-insurgency operations and judicial prosecution; provide fool proof security against attacks with sound emergency response and victim management; use Nacta to carry out periodic assessment of the terror threat; and finally, look into the potential to reform and re-integrate militants into society. At the macro level there is little variance from the 3Ds strategy of development, dialogue and deterrence conceived by the previous government.

It goes without saying that the security policy was long due; to that extent, the effort made by the incumbent government is appreciable. Now the challenge lies in its approval and more importantly, implementation. A large number of road blocks can be visualised in both aspects. The ground work requires consultation with provinces and approval by the federal cabinet. Most crucial is the fact that the government cannot move ahead without consulting the military leadership.

Then there is the problem of political will. Not all provinces harbour ideas similar to the federal government so far as dealing with militant organisations is concerned.

The PTI and PPP who are running governments in Khyber Pakhtunkhwa (KPK) and Sindh respectively are vocal in their insistence that national security policies and operations are the domain of the federal government. Yet, they do not hesitate from undermining the federal government whenever they can; at times it becomes difficult to make out whose side they are on. The Chief Minister and ministers of KPK have not attended funerals of martyred police officials and their own MPAs. They expect the police and the armed forces to lay down their lives while they hesitate in displaying common decency to condole families of those who are no more. Some political parties are calling for negotiations with the jihadist rebels, while others want the government to go on the offensive. Islamist militants have long exploited this ambivalence in their efforts to further weaken the state.

Radical Islamist forces were created by the Pakistan State itself as “strategic assets” against India and the erstwhile Soviet Union. Today they are so deeply embedded within the country’s fabric that displacing them would require a national transformation that goes beyond a mere counterterrorism policy.

It also should be borne in mind that the PPP led government of Pakistan also tried its hand at implementing a policy of similar nature; Nacta, which was its brain child, remained dysfunctional. The reason given was lack of clarity about its status; having been placed initially under the interior ministry but later proposed to be controlled directly by the Prime Minister as was desired by some of the stake holders. In this confusion, it never really took off from the drawing board.

There are some positive aspects in the Nawaz Sharif government’s decision to frame a counter terrorism policy. The fact that there is a will to have a policy of this nature is by itself a great positive. The second positive is that the government is openly admitting that the security challenge is being posed primarily from within the country. A little while back the army chief reaffirmed that the primary threat is internal. Now, Chaudhry Nisar Ali Khan has said that the mayhem in the streets and mosques is “our war”. It is not very often that the top civilian and military leadership seem to be in agreement that an internal war has to be fought. This also is a positive development.

Only time will tell whether the new government of Pakistan will be able to fully implement the counter terrorism policy that it is formulating. It would not be out of place to suggest that the implementation is imperative for the country given the fact that it has lost, at a conservative estimate, more than 50,000 lives and spent tens of billions of dollars that would have been better utilised in much needed growth and development.

On the flip side, even as the policy has come up for debate, the heating up of the line of control with India gives an indication that the State exercises no control over militant forces. It is also possible that the army is playing a dangerous double game; if this is a reality than Pakistan is in for some very deep trouble.

All Pakistani parliamentary parties will meet soon in an attempt to unanimously decide on the course of action for the policy. The two options are opening a dialogue with Taliban rebels or proceeding with military operations.”If we choose war, it will be a wholehearted war, not half hearted, and for that, the whole nation will have to be ready,” says the Interior Minister. Let us see which way the wind blows.