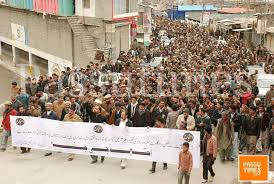 Gilgit-Baltistan, is once again witnessing a public insurgence against the repressive Pakistani regime. For more the three months now, since early November 2017, the local people, especially traders, are out in the streets in protest against the “immoral and unlawful” taxes being imposed upon them by the Government of Pakistan. Complete shutdown and public protests were reported over many days in November and December 2017.

The protests, spearheaded by the Awami Action Committee and similar local organisations, are demanding a quashing of taxes imposed by Islamabad in Gilgit-Baltistan under Tax Adaptation Act 2012.

“Whatever business we do, tax is imposed on it. Be it transaction tax, withholding tax or crosscheck tax; a number of taxes are being imposed on us and it has really become difficult to work for us.,” said Masood Ahmad, a trader based in Gilgit, as reported by the New Agency, ANI.

Such protests witness complete shutdowns of markets and business centres in major towns. There is also thin attendance in private and government offices, and educational institutions etc. The ostensible reason for this thin attendance is said to be non-availability of transport on roads, but in actuality, the white collared people and the public in general is sympathetic to the plight of the trading community and express their sentiments by joining the shut-down. Lawyers across the region, in particular, are openly supporting the traders and boycotting courts in solidarity with the protesters.

The people of Gilgit-Baltistan do not come under the Pakistan Citizenship Act 1951. They have a different status vested upon them in accordance with the Gilgit Baltistan Empowerment Ordinance 2009. The attempt by the Pakistani regime to leverage the 2009 Ordinance to usher draconian taxation is wholly illegal and amounts to imposition of a brutal will of the state on a hapless mass of people.

The people widely believe, and rightly so, that legally Islamabad has no right to impose any taxes since the region is not an integral part of the country. It has a loosely denominated Provincial status, whereby, the federal government wishes to exercise control without giving any rights to the citizens. It is well within the rights of the people to demand a clear determination of the constitutional status of the region before the people are called upon to pay federally imposed taxes.

“Since beginning, our motto remains that ‘no taxation without representation’. If we are not given any rights, why should we pay taxes? It is important to collect taxes to run any country, but it is only applicable if the people are given constitutional rights.” says Mohammad Khan, an advocate in Gilgitas reported by ANI.

The high handed attitude adopted by the Pakistani authorities simply reinforces the perception that they are interested only is exploiting the rich natural resources of the region and looting the people in every conceivable manner without giving even a passing thought to their aspirations. Fed up with this blatant exploitation, the people are now exhibiting widespread resentment without fear of the inevitable reprisals that come in the form of illegal detentions and strange disappearances of those who protest.

In absolute contrast is the position of the people of Jammu and Kashmir who enjoy all privileges of being a part of the Indian Union and yet are not called upon to pay taxes under the Union list. They are, in fact, given subsidies and many benefits to off-set the trauma that they are facing due to the Pakistan sponsored terrorism that they have to contend with.

Draconian taxation and gross exploitation are only a small part of the problem in Gilgit-Baltistan. The bigger issue that will soon gain more traction is the build-up of the China Pakistan Economic Corridor (CPEC). It will pass majorly through Gilgit-Baltistan and will use up a major portion of the abundant resources of the region without giving even one penny to the locals. The plan is to pass off all the benefits directly to the Chinese and the Punjabi elite while the suffering comes in the lot of the local people. Islamabad claims the project would create employment opportunities for some 1.8 million people in Gilgit-Baltistan. The locals, however, are not ready to buy this claim.

“Forget about the jobs; the locals are actually losing their livelihood because of this project. Small manufacturers and shop owners are suffering as a result of the Chinese goods flooding the market. The government has also cancelled the licenses for local miners. Mining in the areas is being handed over to the Chinese,” says Amir Hussain a political analyst in a report published by Germany’s Deutsche Welle broadcasting web site.

It is quite apparent that the people of Gilgit-Baltistan are, most courageously, getting over the fear of the repressive state and are strengthening their voices of dissent in order to fight for their rights. The consistent and burgeoning “shutter-down” strikes are clear indicators of this new found determination o to challenge the mighty and corrupt Pakistani state supported by the brutal repression of its Army.

The world in general and India in particular need to wake up to the massive atrocities and Human rights violations that the people of the region are being subjected to for no fault of theirs. The world needs to pressurize Pakistan towards revisiting its apathy towards the beleaguered region. Pakistan needs to be impelled to meet the legitimate concerns and aspiration of the people. The fact that the local media is being muffled by imposition of the proverbial “Iron curtain” is no reason for the world to stay unaware of the situation there. In today’s era of social media and satellite imagery there is nothing that can stay totally hidden.  The time to act is now or it will be too late and the world will lose out on an entire civilization.

(Dr. Simrit Kahlon is an academician and security analyst)