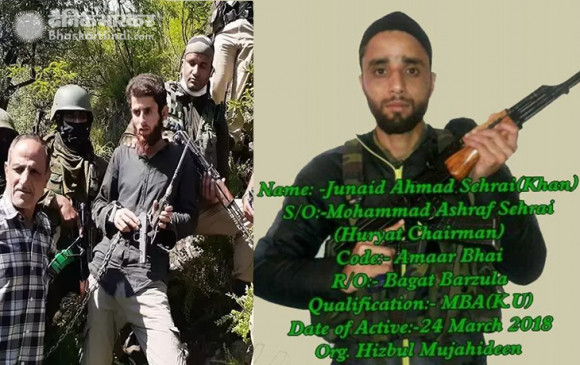 Junaid Ashraf Khan Sehrai, the terrorist killed in an encounter at Nawa Kadal, Srinagar on 19, May, had left his home to join the terrorist organisation Hizbul Mujahedeen (HM) on 24, March. 2018. His killing on the heels of Riyaz Naikoo, who was shot down on 6, May, heralds the end of the internet brand of terrorists. The “Burhan Wani” phase of terrorism is now consigned to history.

Junaid is the son of Mohammad Ashraf Sehrai, a senior leader of the separatist amalgam, Hurriyat Conference, and Chairman of the separatist party Tehreek-e-Hurriyat. His becoming a terrorist is perhaps the only instance of the son of a Kashmiri leader doing so. The children of all other so-called separatist leaders have long since left Kashmir for greener pastures across the world or in metropolitan cities of India, while their fathers remain busy exhorting the innocent boys of the Valley to mindlessly sacrifice their lives for  no justified cause.

Junaid was a student in Kashmir University when Pakistan’s propaganda machinery created Burhan Wani as the poster boy of terrorism and spread the canard that educated boys from good families were joining terrorism. Junaid became an unfortunate victim of this propaganda. He was influenced by his close friend Mannan Wani, a research scholar at Aligarh Muslim University, who took to the path of terrorism in January, 2018.

The terror masters in Kashmir positioned Mannan as a clone of Burhan Wani. He too was used more for his “propaganda value” than combat abilities. He was projected as a poster boy in all Pakistan based social media outlets catering for large Kashmiri audiences.  When Mannan Wani joined the ranks of terrorism, the Pakistan based head of HM, Syed Sallah-ud-Din went into raptures giving interviews and statements about the terrorist movement in Kashmir gaining popularity among the educated youth.

Mohammad Ashraf Sehrai, who took over the Tehreek-e-Hurriyat around the time when Junaid joined terrorism, urged the youth not to get swayed by the extremist ideology and understand Islam from a correct perspective. Though a separatist, Ashraf Sehrai did not approve of the path chosen by his son.
Mannan Wani did not last long. He was killed on 12, October, 2018 in an encounter. There were rumours that Junaid was also killed in the said encounter but they proved to be wrong. Syed Sallah-ud-Din, supported by the extensive paid media network, took full advantage of the death of Mannan Wani. “A PhD scholar’s voluntarily joining the armed struggle gives ample proof that Kashmiri youth believes that final settlement of Kashmir lies in armed struggle,” he said. After leveraging the propaganda value to the fullest, Sallah-ud-Din forgot about Mannan Wani and looked at other sensational stories to exploit.

By then Junaid had reached a point of no return; two years hence, he too has met an ignominious death and lies buried in Kashmir. The burial was done in the presence of a few family members. He survived for two years because he was a valuable asset of the HM. Killed along with him was a relatively new terrorist recruit, Tariq Ahmed Sheikh. The HM is so hard pressed that it can no longer provide adequate protection to its valuable assets like Junaid Sehrai. Sallah-ud-Din has, since long, lost interest in the boys whom he pushed to certain death. He has not spoken a single word in remembrance of Junaid.

Junaid Sehrai gave away his life at a young age of 28 years for a misplaced cause. For those sympathising with him it is necessary to note that he was, by choice, a terrorist and an enemy of the state. His life was marked and his death inevitable. He knew it, his parents knew it and the people of Kashmir knew it. The misfortune is that those who take to the gun do not realise that they would be hurting not only themselves but also their families and their people.

The security forces are absolutely determined to extinguish the scourge of terrorism from the Valley once and for all. They are not ready to spare even a single terrorist even if it means taking casualties themselves. In 2019, eight senior commanders of various terrorist cadre including Hizbul Mujahedeen and Jaish-e-Muhammad were killed along with more than 150 terrorists. This year has already witnessed the death of more than 60 terrorists including the top leadership. Haider, a senior commander of the Pakistani terrorist organisation, Lashkar-e-Toiba (LeT) was killed in the encounter that also led to the falling of Colonel Ashutosh Sharma and four other brave hearts of the security forces. Earlier, Naveed Jatt, another Pakistani terrorist responsible for the murder of the famous journalist Sujaat Bukhari has been gunned down. The terrorist Riyaz Naikoo, killed recently, was deemed to be the only surviving terrorist commander.

The terrorist leadership would have probably gone to Junaid Sehrai, though he lacked the experience and the will for such a responsibility, being more media savvy than a field operative. Before any such decision could be taken by the distressed Pakistan based terror leadership, Junaid too met his end.

Pakistan is equally determined to ensure that terrorism continues in the Valley. For this, it has pinned all hopes on the local cadre. It has recently created a new outfit named “The Resistance Front” (TRF) which is free from all religious labels and the terrible reputations of terror organisations like the LeT. The policy now is to pass on all credit for operational success to TRF and highlight terrorism in Kashmir as an indigenous uprising .

The need to negate Pakistani propaganda propelling Kashmiri youth towards terrorism cannot be overemphasised. Once a person moves on the path of terrorism the die is cast and death becomes inevitable, paying such a big price to achieve nothing is foolishness.  No more Junaid’s should be victimised. It is hoped that political and religious leaders, civil society and parents in Kashmir will not allow their boys to, once again, fall into the trap set out by Pakistan.

(Jasbir Sarai is an army veteran and social activist)