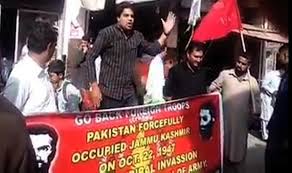 Pakistan has observed yet another irrelevant and fatuous “Kashmir Solidarity Day” on February, 05. This is an annual ritual since 1990 whose stated objective is to support the so-called struggle of the people of Jammu and Kashmir towards self-determination of their political status.

The actual objective of this evil exercise is downright propaganda. It is totally divorced from the reality on ground and a pointless exercise in futility.

It becomes quite apparent that Pakistan utilises this day to send out a message that it will not relent from it evil agenda on Kashmir unless India is coerced by the United Nations into abdicating Kashmir. This is nothing more that coarse blackmailing tactics of the worst kind.

POK‘s eruption into mass protest in tandem with the Pakistani “show of solidarity with Kashmir” is also a ritual since the past many years. This year was no different. The hapless people of POK poured out in the streets in the last few weeks to protest against the repressive regime that they are being subjected to.

The protests were an expression of the frustration of the people because of lack of development, acute human rights violations and non existence of civil liberty and fundamental rights in POK. The people openly blamed the notorious Inter Services Intelligence (ISI) for exercising overarching control over the sham administration and perpetrating atrocities upon them.

The frustration of the people is not without reason. Pakistan has, for ease of management, divided Pakistan Occupied Jammu and Kashmir (POJK) into two entities, POK and Gilgit-Baltistan. Both entities have been given a sham system of self governance with actual power vested in the draconian ISI and Ministry of Kashmir Affairs in the federal government. This facilitates suppression by the principle of divide and rule.

POK is being mercilessly exploited, dismembered and dismantled to serve the interests of the Pakistani state. Most of the illegally occupied territory has already been converted into a virtual colony of the ruling Punjabi elite while a huge portion has been callously transferred to China.

Apart from being in doldrums politically, POK is reeling under a series of natural calamities. No attempt is being made to ameliorate the suffering of the people. Vast aid from international donors has been routed to militant organisations like the Jamaat-ud-Dawa (JuD) to be used for terror activities against India. Relief operations have thus been sidelined.

The travails of the people living in these occupied territories remain hidden from the world because of media strangulation. Journalists, bloggers, civil rights activists are targeted for speaking and exposing Pakistan’s real face to the world. There is hardly any newspaper being published over there, what to talk of electronic media. The world gets to see only a few video clips that are smuggled out and shown by freedom fighters of the area living in exile across the globe. The brutality of the establishment is clearly visible in these footages; people are seen protesting in vast numbers against the atrocities being heaped upon them.

Videos of the protests that were held in tandem with Kashmir Solidarity Day this year have been released by Asian News International (ANI), a Delhi based news agency. They have been aired by many national and international television news channels and are also trending on social media. The very clear message emanating from these videos is that the people wish to rid themselves of Pakistan’s yoke.

The idea of Pakistan expressing solidarity with the people of Jammu and Kashmir is preposterous at the very outset. Where, one wonders, is the oneness of cause or interest that would ignite a feeling of solidarity?

Pakistan claims an emotional bond with the people of Kashmir. This is a fallacious claim. What exactly has it done for the people of Kashmir over the last six decades since it has been rendering “diplomatic and moral support” to them? It has only caused bloodshed and untold misery by exposing the region to barbaric terrorism.

Pakistan also claims a cultural and ideological bond with the people of the state. This too is a fallacious claim. Jammu and Kashmir comprises of people with different ethnicity in its three regions of Jammu, Kashmir and Ladakh. How can it, being an Islamic state, claim cultural affinity with all of these regions?

Besides this, what solidarity can Pakistan foster when it is highly polarised within itself and in the throes of an intractable conflict?

Jammu and Kashmir is an integral and constitutional part of the Indian Union. Its people enjoy all fruits of liberty and freedom enshrined in the Indian Constitution and also a special status that grants them some additional benefits. The region regularly witnesses free and fair elections; changes in governance are implemented seamlessly.

Pakistan simply cannot cover up its misdeeds by observance of such lopsided “solidarity.” The nation would be well advised to understand the sentiments of the people residing in POJK and take tangible action towards improving their living conditions. They, at least, should not be kept in perpetual misery due to the feud between two neighbouring countries.

Pakistan should also realise that the people of Jammu and Kashmir and POJK are not fools to be taken in by such idiotic propaganda and that it cannot shake the Kashmiri bond with the Indian union by indulging in politically motivated and propagandist actions.

(Dr. Simrit Kahlon is a reputed academician and columnist)