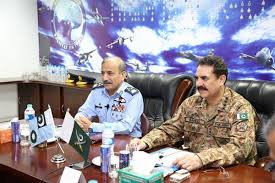 History is witness to the manner in which a few evil minds in Pakistan unleashed the cult of terrorism onto India through the tranquil valley of Kashmir. These people managed to misguide some of the local young boys of the valley to rise against the state. For many decades the state and the people together fought against this monstrosity and have been successful in containing the same. Ultimately, victory went to the virtuous.

There is a saying “what goes around comes around”, the monsters that Pakistan created and let loose on India are now out to eat their own masters. The Tehreek-e-Taliban Pakistan (TTP) is no more than an offshoot of organisations like the Lashker-e-Toiba that were created to spread mayhem in India. All fundamentalist militant organisations in Pakistan are interconnected; their goal is not simply Kashmir – it is the whole of Pakistan along and whatever else in Afghanistan, Central Asian Republics and the rest of India that falls their way. Pakistan is now embroiled in a “do or die” battle with these turn coat insurgents and is finding it difficult to contain them.

It would do Pakistan good to take lessons from the counter-terrorism policy followed by India to counter the very onslaught that it perpetrated against the nation.

The first lesson is all about national will; when the malevolent forces came into Jammu and Kashmir it was the government of the country that took a decision to meet the challenge, the Indian army was called upon to counter the foreign sponsored terrorism. The Indian army did not question the decision of the government; it simply went in to deal with the situation to the best of its ability and came out victorious.

In Pakistan the federal government says something and the army says the opposite, the provinces also chip in with their own agendas. When the federal government roots for talks the army sets out to scuttle the same with its rogue intelligence agency the ISI. The government has now been forced to acquiesce to the Army’s demand for an all out military operation, even though it is not prepared to deal with the civil war like situation that is being created. In the first few days of the operation the federal government has been called upon to cater for lakhs of internally displaced people and the provinces are unwilling to come in its aid. The situation has already attained critical proportions. This lack of national will lead to failure of the operation.

The second lesson pertains to basic humanity; the Indian army was well aware that it was fighting foreign sponsored evil forces on its own land it was convinced that the people were not to be blamed for the situation. The strategy that was formulated was people centric. Care was taken to keep collateral damage to the bare minimum. Weapons of mass destruction were not used at all. Despite suffering heavy losses the soldiers never let the people feel that they were to be blamed for the situation, in fact, they were always conscious of the suffering of the people and made special effort to ameliorate the same by assisting in day to day problems like medical, education, infrastructure development etc.

It is notable that after exodus of the complete Kashmiri pundits community engineered by the terrorists before the Indian Army launched its counter terrorism operations in the Kashmir valley not a single person has left the valley despite terrible terrorist atrocity. There can be no better benchmark to establish the humane approach of the Indian army

The Pakistan army, on the other hand, seems to be fighting in a foreign land; the ongoing Operation Zarb-e-Azb has been initiated by an air assault with fighter jets and helicopter gunships. Tanks are proposed to be used in the ground assault. As a result, for the few hundred militants claimed to be killed the internally displaced population referred to above is a human disaster of epic proportions. Rather than quelling insurgency the army has created a fertile ground for more recruitment by the jihadist forces.

The third lesson is of patience. To neutralise the foreign terrorists the Indian army created a counter insurgency grid spread over the entire state that has difficult mountainous and snow bound terrain in many places. Company operating posts were deployed in remote isolated areas at great risk; they carried out intensive patrolling, won confidence of the locals and created an intelligence base. After years of back breaking work and considerable sacrifice, the results started showing. Intelligence from locals led to specific targeting and elimination of terrorists. The line of control was fenced which brought down infiltration to a great extent. The end result is that from tens of thousands the number of terrorists in the region has been reduced to a few hundred.

The Pakistan army, on the other hand, does not want to soil its hands with dirty work. It refuses to put boots on ground. Further, it does not wish to remain embroiled for an indefinite period. After a while it will declare that the militants have been neutralised when they would have, in fact, merely hidden themselves in the jungles and in Afghanistan or the adjoining provinces. The army will then declare victory; the displaced people will go back since they have no other option. In a short while the militants will come back again to inflict even more atrocity on the hapless population and it will be business as usual in Pakistan. If the army is really serious it should be ready to sit in the remotest corners of North Waziristan along with the locals for at least a decade.

It is only if the government of Pakistan and the Pakistan army learn lessons from India that one can be reasonably assured about the seriousness of Operation Zarb-e-Azb and its possible success. Otherwise, it would be best for India to prepare to deal with an even more radicalised and insecure neighbourhood and creation of an Iraq like situation in Pakistan in days to come. The difference will be that the Iraqi militants are gunning for oil fields but the Pakistani militants will be on the look out for nuclear weapons, a much more dangerous proposition. It is time for India to raise her antennas and get ready for the worst.