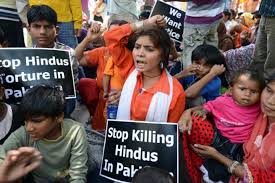 The Hindu community in Pakistan has dwindled from 15 percent at the time of partition to less than two percent (1.6%) now. Pakistan has a mere two million, Hindus even as India has a Muslim population larger than that in Pakistan itself.

The decline came by due to engineered pogroms of persecution that included forcible killings, conversions, kidnapping of Hindu girls and their forcible marriage to Muslims and a host of other hardships. Even decades after partition, Pakistan based Hindus are on the lookout for ways and means to get back to India.

In view of the bad impression being created among the international community due to such persecution of minorities the Government of Pakistan has taken some cosmetic steps to redeem the situation. The case of the minorities has also received support from media and civil society activism. Many media forums and social organisation have been highlighting the unholy persecution of Hindus and other minorities in Pakistan.

A meeting with the Hindu community by Prime Minister Nawaz Sharif on the occasion of Diwali comes across as a posture to showcase the governments concern for minorities. The target in this propagandist exercise was not the Hindu community but the international community, especially such nations like the United States that provide financial support to Pakistan.

During his address to the community, PM Sharif gave an assurance that his government would stand by victims of violence from among the minorities, including Hindus, Sikhs, Christians, Parsis, etc. and bring the perpetrators of religion driven violence to justice even if they are Muslims.

The meaningless gesture fell apart in no time with a whole lot of fundamentalist organisation and Mullahs roundly criticising the “Un-Islamic” views expressed by the Prime Minister. It became quite obvious that what has been said would not be applied on ground.

Such a situation is not new to PM Sharif, whatever he says gets sidelined mostly by the all powerful Pakistan Army or the fundamentalists or both.  Sharif attempts to create an impression that he is willing to walk the extra step towards de-radicalisation of the Pakistani society, but elements stronger than him within the country are not allowing him the space to do so.

It is also possible that all elements are hand in glove and playing out a Jekyll and Hyde act to keep the international community in good humour.

The only positive development is that the Supreme Court of Pakistan, in a landmark judgement, has highlighted the state’s failure to protect religious minority communities and their places of worship from violence and has given certain workable direction to the government to rectify the wrongs that have been and continue to be perpetrated.

The Supreme Court has specifically mentioned the need to modify the curriculum of schools in a manner that promotes religious tolerance. As things stand now, the history books in Pakistan openly propagate angst against the Hindu community and other minorities and animosity against India. The Supreme Court has also mandated the government to take appropriate measures to protect the places of worship of minority communities as also their lives and properties. Prime Minister Nawaz Sharif, in his address to the Hindus was merely reiterating what the Supreme Court has mandated.

The Government of Pakistan is also bound by the provisions of the National Action Plan (NAP) to combat terrorism and extremism in the country. NAP was formulated after the terrorist attack on the Army Public School at Peshawar in December 2014. In the wake of widespread disgust and public ire against the terrorist and fundamentalist organisation holding sway in Pakistan the government, through the medium of this plan, pledged to ensure protection of minorities. The government also needs to make good its promise to controlling the propaganda of hatred being unleashed by fundamentalist organisations.

If PM Sharif is serious about the promises that he is making in open forums to the minorities, he will have to take affirmative action towards changing the mindset of the nation which looks at Non-Muslims as “infidels.” To be an Islamic nation is one thing, to have animosity against other religions, sects and communities is quite another.

Reversing this trend will require restructuring of the relationship of the state with its non-Muslim citizens and the role of Islam in governing public lives, areas that remain contentious and even hazardous to engage politically.

A first good step in this direction would be to remove the draconian Blasphemy Law which is the biggest tool in the hands of the Government in persecuting minorities and gives impetus to the environment of insecurity and religious intolerance prevalent in the country.

In its current form, Pakistan’s blasphemy laws is in absolute contravention to international norms on human rights, especially when related to the rights to freedom of religion and belief; freedom of expression; and equal protection of the law. Jurists across the world hold the view that this law is often misused to settle personal vendettas and achieve political purposes.

In Pakistan, families of people accused for blasphemy being targeted as a common practice. In fact, the moment any such case comes to light the entire community and their places of worship become vulnerable. In addition to individuals prosecuted for committing offences related to religion, dozens of people accused of blasphemy, their families, their neighbourhoods and places of worship have been targeted by mobs and organised extremist religious groups

Prime Minister Sharif has promised the Hindu community that he will spend the next Diwali also with them. It would be best if he does so only after honouring some of the promises that he has made to them. Providing for their protection and dignity would entail half the work done and this is well within the capacity of the government to deliver upon. It now remains to be seen whether PM Sharif will be able to stand up to the mandate and, more importantly, his word so far and protection of minorities is concerned.

(Jasmine Brar is a Lawyer with Interest in human rights issues)