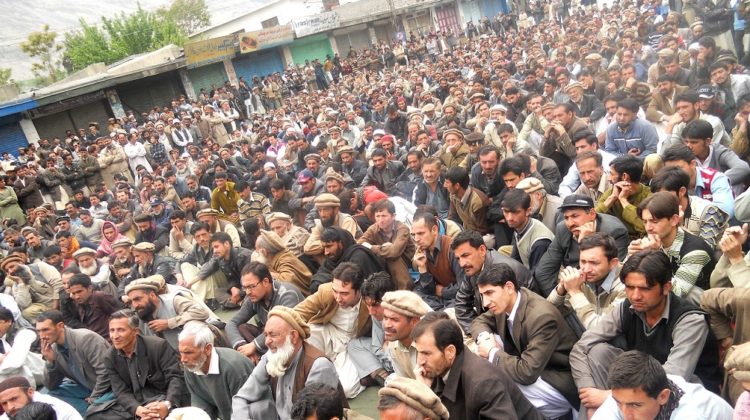 The Pakistani English daily, Dawn, recently carried an interesting report regarding the Chinese Government’s contribution of 30,000 food packets for distribution among Gilgit-Baltistan’s underprivileged communities. The packets were delivered to Khalid Khursheed, chief minister of Gilgit-Baltistan who belongs to the ruling Pakistan Tehreek-e-Insaaf (PTI) party of Imran Khan.

The need for the food packets has arisen because the region is reeling under the debilitating effects of uncontrolled inflation. Of course, the whole of Pakistan is suffering from a huge financial and resource crunch, but while the others have some means to stay afloat, places like Gilgit-Baltistan, already teetering under the burden of extreme poverty, are literally tearing apart. What chance do these people have when even the lower-and middle-income classes are struggling to buy basic food items? On top of it, the Corona epidemic has severely impacted whatever little business activity was happening in the region.

The people have hit the streets to compel the government to check spiralling inflation. They are openly putting the blame on the ruling PTI and specifically its leader Prime Minister Imran Khan whom they define as unscrupulous and inept. However, protest does not pay any dividends since there is no one to listen to their voice, with the media having been put behind an iron wall. It is only the vibrant Diaspora of the region that raises a voice but the same is very small and too far away to make any difference in the day to day life of the common man.

It is so disgusting to note that the proud people of Gilgit-Baltistan who are hard working, honest and fully capable of looking after themselves, and also the proud inheritors of vast natural resources, have been reduced to a level where they have to subsist on food dole from a foreign power. The effusive thanks that Chief Minister Khalid Khursheed extended to the Chinese for this dole was akin to putting salt on the wounds of extreme humiliation of his people.

The federal government, through its stooges, is attempting to build trust in the minds of the locals for the Chinese, whose increased presence in the region, to the extent of permanent settlement, has become a necessity since the China Pakistan Economic Corridor (CPEC) is manned exclusively by them. The few locals who may be employed in small, menial jobs will be required to learn the Chinese language for which many centres have opened up in the region.

Already the process of settling the Chinese has commenced with the tacit permission of the stooge government; there is talk of welcoming these foreigners and giving to them a “minority status.” It is just a matter of time before the Chinese will come in enough numbers to change the demography of the region. The Xinjiang model to turn the ethnic population into a minority and onward irrelevance will be applied here also. 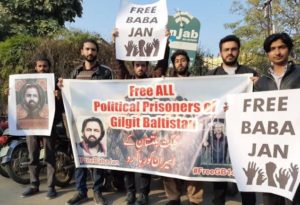 Protest against Army atrocity in Gilgit-Baltistan

The political machinations of the ruling federal government are also taking an ominous turn. In December 2020, Prime Minister Khan constituted a 12-member committee to make recommendations about changing the status of Gilgit-Baltistan to a Province of Pakistan. The PTI has already engineered a brute majority in the Legislative Assembly through outright rigging of votes with active support from the Pakistan Army, and now it is using the same majority to push an joint resolution asking the federal government of the nation to grant it provincial status and provide it with representation in Parliament and other constitutional bodies. The resolution which supports the mandate of the committee, was moved personally by Chief Minister Khalid Khursheed which is enough indication of the importance that the ruling party is giving to the same.

Incidentally, there are a lot of corruption allegations against the chief minister himself, in one astounding case he is being accused of shaving off half of a Rs 100 crore budget passed to provide clean drinking water to Gilgit city. How can a corrupt politician of this nature be depended upon to look at the benefit of the people.

Assistance in defending the constitutional rights of the people is coming from India whose diplomatic channels have openly slammed the perfidious attempts by the Government of Pakistan to accord provincial status to Gilgit-Baltistan in order to legalise the illegal occupation of the region. The stand taken by India is “firm rejection of all attempts by Pakistan to bring material changes to a part of Indian territory which is under Islamabad’s illegal and forcible occupation and initiation of steps to immediately vacate such areas.”

The matter has been further clarified by Anurag Srivastava, spokesperson in the Ministry of External Affairs (MEA). “Such attempts by Pakistan, intended to camouflage its illegal occupation, cannot hide the grave human rights violations, exploitation and denial of freedom for over seven decades to the people residing in these Pakistan occupied territories,” Srivastava has stated.

The federal government is exercising a vice-like control over the strategically important and resource rich territory ever since partition of the country, while giving an impression to the world that it is supporting the right to self determination of the people.  Since 2009, it has thrown caution to the winds and has been working towards amalgamation of the region as its integral province.

The aforementioned steps are designed to push through the provincial status and further strengthen the vice-like grip on the region. It is also an outcome of the compulsion to assist China in gaining control and thus divert its attention from the abject failure of the CPEC.

Overall, under Imran Khan, Pakistan is playing a very diabolical game in Gilgit-Baltistan. The other leaders also never had much time for the hapless people of this region but what Imran Khan is doing will lead to their annihilation as a distinct racial and cultural entity and will reduce them to the level of serfdom. India needs to remain steadfast on the principled stand that it has taken to assist the people of Gilgit-Baltistan. Consistency in application of the pressure holds the key to success in this war of righteousness.

(Onkareshwar Pandey is a senior journalist and thought leader)