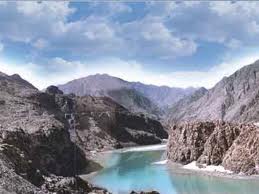 Stuck with a power situation that is getting worse by the day and a public impatient to see him fulfil his poll promise, Prime Minister Nawaz Sharif is getting impatient. He has launched an all out campaign for generation of more power. Prominent on his ‘to do’ list is revival of the mammoth Daimer-Bhasha Dam project. There is ample reason for his eagerness to get the project moving. the dam on the River Indus to be situated near a place called “Bhasha” in Gilgit-Baltistan’s Diamer district, promises 4,500 MW of electricity and 8.5 million acres feet (MAF) of water that can be channelised for irrigation.

The project has a long and chequered history; in January 2006, the Government of Pakistan announced its decision to construct 5 multi-purpose storage dams in the country during the next 10-12 years. According to the plan, Diamer-Bhasha Dam project was proposed in the first phase with an astounding price tag of over US $ 8.5 billion. The World Bank, however, linked construction of the Dam to a No Objection Certificate (NOC) from India since the area is under dispute between the two countries. Pakistan knew that no such certificate would be forthcoming.

There was also the problem of public protest against the project. There is ample reason for protest since the villages and farms of over 35,000 people will disappear should the project see the light of day. The affected people are demanding a compensation package of Rs 300,000/- per household, a separate sector in Islamabad for resettlement, a share of the royalties and resolution of the border dispute between Gilgit-Baltistan and NWFP. The previous government was nowhere near meeting these demands.

The inhabitants of the area, exploited and subjugated by Pakistan at the best of times, are absolutely certain of getting a raw deal from the entire process. The locals say openly that the construction would generate power for the rulers and leave the region in darkness. There has been wave after wave of protests to the extent that in February 2010 Police resorted to firing on protesters in which two persons died.

Then there are other issues involved; the project is to be located in a mountainous, earthquake-prone area. There are historically significant rock carvings on both sides of River Indus near Chilas that date back to prehistoric times; the most recent ones testify the Islamisation of the region in the 14th century. Tens of thousands of these thousands of years old rock carvings will vanish.

Now Nawaz Sharif is in hyper mode to restart the project even though the projected cost has gone up to a whopping $ 14 Billion. Finance Minister Ishaq Dar has been literally camping in the headquarters of the Asian Development Bank (ADB) for release of funds. Meetings were held in July with ADB Country Director Werner Liepach. The ADB wants the World Bank to provide $ 2.5 billion to match its financing. The hunt for a lead financier is still on. Ishaq Dar is now claiming that the banks have been convinced to be a party to the project. “I have taken up the Diamer-Bhasha issue with the ADB and its visiting vice president was very positive and promised to work proactively with Pakistan and become the lead finance manager for the project,” he is reported to have said.

The question now is whether the World Bank will go against its earlier stand of sensitivity to India’s concerns and insist upon the NOC or not. Pakistan officials are considerably tight lipped on this score. In any case donor agencies have recommended to the government to give greater priority to building smaller dams which would be less costly with a shorter construction period. In this regard the Dasu dam project gets a head start on Daimer-Bhasha. Meanwhile Pakistan is also looking at China for support and there is word in the air that the country may consider funding a bulk of the project costs, as well as provide 17,000 workers.

There is no doubt that Pakistan will go to any extent to get the project through. There is every indication that the country is already exploiting its considerable media and psychological skills to pressurise ADB into conceding to what it desperately needs. Against this backdrop India will need to generate extensive pressure to ensure that the concerns that have been raised over the years are met in total by Pakistan. First is the disputed nature of the area and second more important is the plight of the people who are essentially Indian nationals stuck in a debilitating condition of occupation. India has an abiding responsibility towards these people that goes beyond the territorial dispute. The fact that not much has changed in the status of the area has to be impressed upon the financial organisations that may be contemplating a change in their stance. ADB had refused to provide funding to Pakistan due to rising political concerns way back in 2003-04 when the project was still in the inception stage. What new development has taken place to merit a change of heart?

Another important point that needs emphasis is that the project, after an eight-year construction period, would provide only 4500 MW of electricity for the national grid. The amount is not enough to address the requirement of half of Pakistan’s population (around 80 million people) that has no access to power at all. A costly project like Diamer-Bhasha can only benefit industries and wealthy Pakistanis. The lives of the common people in the 40,000 villages in Pakistan will not change with construction the Diamer-Bhasha Dam.