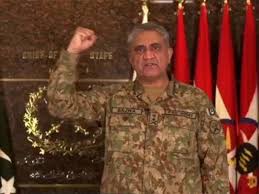 “March 23, 1940, we pledged to make Pakistan, and we were successful. Let’s make a pledge today that we will cleanse Pakistan of terrorism, because, this is our Pakistan,” said General Qamar Javed Bajwa, Chief of the all powerful Pakistan Army on the eve of the 77th Pakistan Day.

Pakistan Day, celebrated on 23, March and also called Yaum-e-Pakistan, has a dual significance for the nation; it was in this day in 1940 that the Lahore Resolution adopted the first constitution of Pakistan to be in place at the time of transition. Sixteen years later on this very day Pakistan was declared the first Islamic Republic in the world.

It is quite clear from the statement of the Army Chief that 77 years after the idea of Pakistan took roots and almost seven decades after the country came into being, it continues to fight a losing battle against internal dissension and violence perpetrated by internally incubated mercenary militants.

It would be difficult to comprehend the emotions of those who spent a lifetime in pursuit of this dream which, miraculously, led to the creation of Pakistan. It is good that the father of the nation, Mohammad Ali Jinnah and his close compatriots like Liaquat Ali did not live long enough to see their dream turn to dust.

Martial law, declared in the country in 1962, replaced the “Republic” with a dictatorship. Elections were declared in 1970, only to lead to a civil war that caused the nation to be split into two.

The truncated nation then alternated from a sham of a civilian government to a dictatorship for almost four decades till 2008 when the incumbent military dictator, General Pervez Musharraf, made way to a Pakistan People’s Party (PPP) led government with Yousaf Raja Gilani as the prime minister.

By then, the idea of the “Republic of Pakistan” has been shred into pieces and the ideology of the founding fathers was in smithereens.

Since 2008, Pakistan is being ruled by an elected civilian government but there is no doubt in anybody’s mind about actual power being exercised by the Pakistan army. This makes the country a “virtual dictatorship,” something quite unique in the world.

There are a number of other things that the founding fathers would be ashamed of. Mohammad Ali Jinnah envisioned Pakistan as a homeland for South Asia’s Muslims and not as an Islamic State. He had emphatically declared that non-Muslims would be equal citizens in the new country. “You are free; you are free to go to your temples, you are free to go to your mosques or any other place of worship in this state of Pakistan….,” he said.

His descendants have dishonoured him by indulging in systematic decimation of the minorities to include Hindus, Sikhs, Christians and even Shias and Ahmediyas.

At the time of partition in 1947 almost 27 percent of Pakistan’s population comprised of “minorities.”  Today, such non-Muslims are a miniscule three percent. The 20-25 percent Shia Muslim population is leading a terrorised existence due to serial killing, rape and plunder by the majority Sunnis. Most astoundingly, the Ahmediyas, who are basically Muslims, have been declared non-Muslim.

Pakistan went on to lay roots of a cult of violence in pursuance of its evil and malevolent “policy of a thousand cuts” targeted towards India. Spread of terrorism in the Indian state of Jammu and Kashmir was the fulcrum of this policy.

The policy of spreading terror and dissension was also extended to Afghanistan in support of covert US operations to oust the Russians from there. This led to the rise of the Afghanistan Taliban followed by the Tehreek-e-Taliban Pakistan (TTP) which firmly embedded militancy within Pakistan itself.

With time, terrorist organisations like the LeT and TTP became Frankenstein monsters and started causing untold damage within Pakistan too. This is what the Army Chief is now flagging as the biggest challenge being posed to the existence of the country. .

Pakistan has, due to consistent fiscal mismanagement landed itself into a veritable debt trap. It is surviving of dole provided by such countries that exploit is in one way or the other for personal gains. It is facing a threat of becoming a vassal state of some big power for all times to come.  This is definitely not a situation that any self respecting people would like to be in.

The hardships being faced by the people of Pakistan Occupied Kashmir and Gilgit-Baltistan are not hidden from the world despite the federal government keeping the regions out of media reach.

These people are being directly targeted by the Jihadi forces; they lead a life of constant fear and insecurity not knowing when the Pakistan army or the terrorist would come knocking and some member of the family would disappear forever.

India attained independence exactly at the same time as Pakistan. The difference between the two countries is that India did not deviate from the path of democracy, inclusiveness and freedom despite all the challenges that it had to face as a fledging nation. Its army remained apolitical even as the political system mulled along. The end result was that India progressed, albeit slowly, while Pakistan kept degenerating into a cess pool. There would be no shame for Pakistan to take a leaf from India to turn around its fortunes.

Pakistan would also be well advised to relent on its debilitating and self destructive Kashmir policy. A state which cannot look after itself has no capacity to handle additional and sensitive territories like Kashmir.

It is an established fact that Pakistan is a failed state. In order to come out of the cauldron it has to reinvent itself as an inclusive, liberal democracy as envisioned by the founding fathers of the nation. Sadly, no political establishment in Pakistan has been successful in taking wholesome steps in this direction. May Pakistan Day bring with it a new ray of hope for the fading nation and its beleaguered people!

(Jasbir Sarai is an activist of AAP based in Chandigarh)