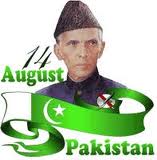 On the 65th Independence Day of Pakistan there is only one word to define the state of affairs in the country – a total mess, presently the situation is so chaotic that the very existence of the Nation as a geopolitical entity is at threat. In all occasions in the past, when the Nation faced similar challenges, at least some basic institutions and the government, however fragile, were not totally challenged and this ensured a continued existence of the Nation state. Today, there is not a single authority or institution in Pakistan which enjoys the faith and support of the people. The sense of betrayal amongst the populace is very high. The country, including its leadership, does not seem to know what should be done. Institutions like the army, bureaucracy, government etc are fighting each other through proxies due to their conflicting interests. This battle for political supremacy has created near anarchy with no sense of direction.

Where in the world would one find the army supporting and assisting a foreign power in the conduct of operations against its own people despite opposition to the said operations from duly elected ministers of the same country? There are many in Pakistan amongst the political leadership, the media, the intelligentsia and, of course, the local populace who have no qualms in declaring the US as Pakistan’s enemy number one. Yet, these very people are supportive of the Pakistani Army which is assisting the much hated US in the war against terror in their own country. Is it possible for a Nation to have more contradictions than this? Weird conspiracy theories are doing the rounds with the blame for the mess being put squarely on the shoulders of the US, India and Israel in the given order of priority.

It is, however, common knowledge that anti-Americanism in Pakistan is being created to fleece the latter country. Public sentiment is used to justify reluctance in providing support to the US; its attendant discomfiture is then used as a bargaining chip by the Pakistan army to secure more equipment and finances while doing less against the terrorists who are, in any case, perceived to be a strategic military assets for all future conflicts against India.

The war against terror is not the only problem being faced by Pakistan. More critical and dangerous is the sectarian violence that has enveloped the nation lately. Karachi, in the last six months, has seen around 1200 deaths in sectarian violence. The city for all practical purposes has got divided into Sindhis, Mohajirs (Muslims who migrated from India to Pakistan at the time of independence) and Pushtos. To claim political control over the city, all three communities are fighting through their armed gangs with active support from their respective political parties. Pakistan People’s Party (PPP), the ruling party of the Sindh Province and also the federal government, represents the Sindhis; Motahhida Qaumi Mahaj has its base among Mohajirs and Awami Nationalist Party represents Pushtos across Pakistan and Karachi. The city, which is also deemed to be the financial capital of Pakistan, has come to a grinding halt with no economic activity whatsoever. It looks like a veritable war zone where all the three communities are engaged in killing and arson against each other.

At this crucial stage, when the people need effective leadership to come to their rescue and give respite from violence, the leaders are themselves instigating violence. Pakistan’s Home Minister, Rehman Malik, had given a statement in June that girl friends and wives are behind a majority of the killings in Karachi. Another leader from PPP, Zulfiqar Mirza, during a brief period of relative peace in July said that Mohajirs came hungry and naked to Pakistan; this statement cost 15 lives on the very day that it was made. With this kind of ignorant and narrow minded leadership is there any possibility of Pakistan managing to come out of its self created chaos? Sectarian violence is not restricted to Karachi only; the Hazara’s in Quetta, the capital of Baluchistan are dying at the hands of Deobandi militants. The demand for a separate Hazara state has further fuelled the violence against this minority Shia Firqa. The province is also facing violence from the army and Baluch nationalists are getting murdered by the ISI regularly.

It is quite evident that Pakistan is a nation at war with itself. Today, no one can claim to be innocent in Pakistan. At one level, one is a victim of violence at another level he is the perpetrator of violence. Everyone is involved in torturing and exploiting the weaker community. In these circumstances, those who are on the hit list of all perpetrators are the hapless minority communities of Sikhs, Hindus and Christians. The country requires a messiah to rescue it from this mess, failing which, it is likely to implode under the weight of its self created chaos and confusion. To add fuel to the fire there is a demand for creation of new provinces in the country based on linguistic lines. Altaf Hussain, the tallest leaders of the Mohajirs, has requested India to accept five crore Mohajirs in case the Pakistani army gets involved in ethnic cleansing of Karachi as it did earlier in the 1980’s. The silver lining is that, as yet, the Army has not reacted in spite of grave provocations and the government in Pakistan is viewing the problem with some degree of maturity and patience. This may be an indication that Pakistan has not completely lost faith in the possibility of coexistence as a nation. There is a possibility, however bleak and tenuous, that the country will witness a turnaround sooner or later. For India an insecure truncated and fundamentalist Pakistan is a much bigger threat than a strong Pakistan harbouring an inimical posture. Hence, there is no option but to hope for the best.