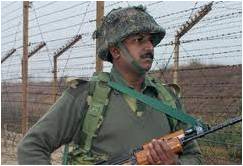 The Indian Army on Thursday reported yet another incident of ceasefire violation by the Pakistan Army in Krishna Ghati sector of Poonch district. This is the third incident of ceasefire violation in the same sector in the month of December. Unprovoked ceasefire violations previously took place on December 05 and 14. The soldiers on duty first noticed suspected movement of a group of infiltrators in Nangi Tekri area of Krishna Ghati sector. When the infiltrators were challenged, the Pakistani soldiers provided cover fire thus violating the ceasefire. The exchange of fire continued for over two hours. The Indian troops effectively retaliated the firing to prevent the infiltration bid. .

Despite rumours of a coup by the Pakistan Army and trust deficit with the US, the Pakistani establishment is not relenting in its efforts to target India, especially so, in Kashmir. This is probably a ploy by the Pakistani army to divert public attention from US/Afghanistan towards Kashmir. In view of the harsh weather conditions prevailing along the line of control, the Army authorities are making all possible efforts to plug the infiltration routes to prevent major attempts at infiltration