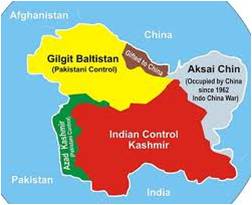 Last monsoon, while the attention of the world was focused on the flood-ravaged Indus River valley, a geopolitical game plan was quietly unfolding in the Himalayan borderlands of northern Pakistan. Islamabad was quietly handing over de facto control of Gilgit-Baltistan a disputed region of Jammu and Kashmir to China and that too for keeps. The latest proposal doing the rounds is that Pakistan is all set to lease Gilgit-Baltistan to China for 50 years, whereby, governance of the region will literally be in the hands of the Chinese.

The entire Pakistan occupied western portion, earlier referred to as the Northern Areas, is closed to the world. However, recently reports by Pakistani journalists and human rights activists regarding two important new developments in Gilgit-Baltistan have been trickling into the international information domain. The first is regarding a simmering rebellion against Pakistani rule and second is the confirmed influx of an estimated nine to 11 thousand soldiers of the People’s Liberation Army(PLA) into the region. Until recently, PLA construction crews lived in temporary encampments and went home after completing their assignments; now big residential enclaves are being constructed, pointing towards a clear design of long-term presence. Mystery also surrounds the construction of 22 tunnels in secret locations where even Pakistanis are barred from entry. These tunnels may be for a projected gas pipeline from Iran to China that would cross through Gilgit. Alternatively, they could also be used as missile storage sites.

The Gilgit-Baltistan region, previously known as Northern Areas, shares its international border with China and the Central Asian Republics. On the Indian side it is separated by the line of control. Like Pakistan Occupied Kashmir, it had been a part of the princely state of Jammu and Kashmir during the British rule and was, till recently, bereft of a constitutional or national identity since Pakistan preferred to loot the region under the garb of it being a territory under dispute with India in the United Nations.

For Pakistan, the move aims at cementing its all-weather relations with China, against the backdrop of an irreparable rupture in ties with the US. As per an American think tank `Middle East Media Research Institute’, the decision to launch ‘The Pakistan-China Strategic Programme for Gilgit-Baltistan’ was taken during General Ashfaq Parvez Kayani’s visit to China in January. A report, titled ‘Pakistan’s Deteriorating Situation, Strained Relations with America: Deliberation on Leasing Gilgit Baltistan to China for 50 years’, published in a Urdu daily, Roznama Bang-e-Sahar, said: “In the backdrop of the deteriorating situation in Pakistan and strained relations with America, deliberations are on to consider handing over Gilgit-Baltistan to China on a 50-year lease”.

The reported presence of Chinese troops was also confirmed by Kashmiri researcher, Dr Shabir Choudhry, who had led a team of researchers to Gilgit-Baltistan in October, 2010. Dr Choudhry delivered a series of lectures in UK addressing the implications of China’s increasing presence in the region and warning of the likelihood that it could emerge as a battleground for military confrontation between China and Pakistan on one side and India and the US on the other. “There is a big Chinese presence in Gilgit-Baltistan. Apparently they are involved in many mega projects. Not only are they opening Chinese banks there and building infrastructure by investing billions of dollars, they are secretly and assertively taking control of the region. When we visited the region…we saw many Chinese there, which included army men,” said Dr Choudhry.

In October, 2011, renowned Pakistani journalist and author, Amir Mir, had revealed that Pakistan wanted China to build a naval base in Pakistani coastal town of Gwadar, but the latter were more interested in building military bases in the Northern Areas. This was a part of the long-term Chinese strategic move to undercut US and Indian influence in the region. The basic objective was to stop, repel and fight any kind of strategic aggression by India at the behest and instigation of the US and NATO.

According to well-informed diplomatic circles in Islamabad, the Chinese desire also stems from the need to contain the growing terrorist activities of the Al-Qaeda-linked East Turkestan Islamic Movement (ETIM).These nationalist militants, who want the creation of an independent Islamic state, are allegedly being trained in the tribal areas of Pakistan. Beijing believes that, similar to the American military presence in Pakistan, a Chinese presence in the Northern Areas would enable its military to effectively counter these Muslim separatists operating in the Xinjiang Province.

The Chinese game plan is very simple and equally obvious. Initially, China plans to cement its footprint in the region through workers and engineers under the cover of development projects. Later, it will create justification for its presence under the name of reconstruction and infrastructure development. A gradual increase in strategic assets will rise the need to send in more Chinese troops to protect the same. All this will ultimately give enough reason to China to continue with its presence on a long term basis.

Whoever wins this game of big stakes, the loser will ultimately be the people of Gilgit-Baltistan, who will probably not get geographical and political independence for the next several hundred years. This sentiment is echoed by a young exiled Northern Area blogger from his adopted European country, “Pakistani’s just fell from the frying pan into the fire. There is absolutely no way that they can get the land back from China in 50 years. Furthermore, this part of land is claimed by India as well. Giving away disputed land to a third party is reckless beyond belief. Pakistani leaders talk about having the interests of their country and people in their hearts, this action shows what they really are all about.They have become lapdogs to their Chinese masters”.