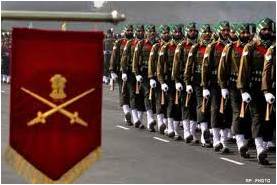 Every year January, 15, is observed and celebrated as Army Day in India. On this day, the first Indian soldier, General KM Cariappa, took over as commander-in-chief of the Indian Army. The nation had every reason to be proud to have an Indian at the helm of its forces. In those idealistic days, we as a nation, took pride in our nationality and went so far as according to our country the same status as accorded to our mothers. We vowed to guard and protect her person from any kind of foreign ingression or intrusion. The Armed Forces have, in a very exemplary manner, upheld this holy mandate time and again; whether it was during the Indo-Pakistan war, 1947- 48, the Indo-China War, 1962, two more wars against Pakistan in 1965 and 1971, the Kargil war of 1999 or the many foreign sponsored insurgencies in our territories.

This year as in the preceding years, the Army Day celebrations will be replete with the expression of our pride in being an independent, sovereign and powerful entity in the global community. The Indian Army will, no doubt, renew its pledge to serve, preserve and guard well the honour of our country. But one wonders (this year specially) whether the Army Day celebrations are solely an affair to be observed, conducted and celebrated by the Indian Army alone. Does the nation have nothing to offer to its forces in return for their untiring endeavours in its service?

My thought process is guided by the gruesome event that took place about ten days before the Army Day and the inadequate national response to the same. Two of our soldiers who were performing their sacred duty while patrolling the Indian side of the line of control were attacked by Pakistani miscreants (either troops of the Pakistan army or Jihadis or both) who had sneaked inside Indian territory to perform this dastardly deed. While the throat of one Indian soldier was slit, the other’s head was chopped off in a most gruesome manner.

Whatever the manner in which the act was carried out and whatever the larger design of the Pakistani Army in cahoots with the Jihadis, at the very elemental level, this act remains a grievous attack on the honour of a very honourable force, the Indian Army. And honour must be avenged at all costs. It is not as if the Indian Army is incapable of defending the honour of its men; if it has not reacted it is because of its inherent discipline that has never allowed it to over step its mandate. More importantly, it possesses the ability to absorb grievous hurt with immense dignity and grace.

Two great pillars of our country, the media and the political leadership of the country are instruments of expression of the opinion of a billion plus Indians. So what has been the response of these two organisations? Regrettably, one has to admit that they have been found sadly lacking in their support to our army and our men.

In an effort, no doubt to project themselves as fair journalists the media, especially the electronic (Television) segment, has been seeking the opinion of Pakistani experts on the subject. These foreign elements have assaulted the collective sensibility of the nation with their sniggering at the discipline of the Indian Army and in fact even blamed it of misconduct. Indians may look towards this with revulsion but other world powers would find some merit in these arguments and thus open themselves to an absolutely gross vista of debate. The matter does not end here, there are a number of so-called Indian defense analysts who have openly castigated their own army and obliquely implied that such transgressions have been made by our force also on earlier occasions and that such things happen normally o the line of control. Has anyone heard anybody from Pakistan making a comment of this nature against their army or their nation? How anyone can justify such an unprovoked gruesome act and how the Indian media can allow itself to be used for this purpose is beyond understanding.

The UPA led Government of India is no less. It is yet to express its unstinted and forceful solidarity with the forces; the few statements made in this regard being weak and ineffectual. The Home Minister who has earlier visited the state of Jammu and Kashmir at the drop of a hat, ostensibly to assuage the sentiments of the aggrieved civilian population has yet to commiserate with the forces in their hour of grief. It took the Defence Minister four days to talk about the need to maintain the army’s prestige. As of now, all that these political mandarins can think of is continuing with the peace process and the fragile trade ties. Very noble ideals, no doubt, but do they realise that this peace process and these trade ties have been made possible by the Indian Army’s efforts and sacrifices?

If this is the amount of attention that we pay to the morale of our forces, they may soon enough become demoralised to the extent of seeing no reason to stick their necks out for a country that does not value them or them or their

sacrifices. Indian must act to preserve the honour of its soldiers before it is too late.

At the Kargil War Memorial there are some very moving words inscribed: “…and how can a man die better than facing fearful odds, for the ashes of his fathers, for the temples of his Gods.” Unfortunately while our men in the forces have the ability and the sense of honour to make such supreme sacrifices, we as the beneficiaries of their sacrifices have failed in finding a way to adequately express our gratitude. As the nation observes the Army Day this year it should be with this humbling thought in our hearts and minds.