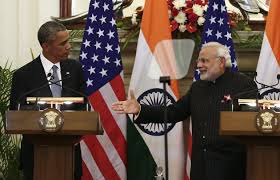 A new era has begun in the Indo-US relations following a landmark visit of U.S. President Barack Obama. He along with Indian Prime Minister Narendra Modi has injected a new vitality to the roller-coaster relationship between the two largest democracies which had hit a rough patch in the last few years.

The visit was not only rich in symbolism but historic in many ways. This was the first time a US President was attending India’s Republic Day. He also became the only US president to visit India twice during his tenure, in what can be described as an open declaration of friendship.

There are several pluses of the visit. Besides taking the defence relations to a new level, the two leaders have unveiled plans to cooperate on a wide ranging issues from trade to climate, counter-terrorism and strategic cooperation in the Asia-Pacific to Indian Ocean besides setting up hotlines at the level of top leadership.

But the toast of the visit was the announcement of a “breakthrough understanding” on the nuclear liability issue.

Few had imagined that the civil nuclear agreement between the two countries, which lay in limbo for six years, could see the light of the day as negotiators from the two sides failed to reach agreement on several crucial issues during their three meetings in London before the start of President Obama’s visit.  But it took a warm bear hug from Mr. Modi, a stroll at the lawns of the pristine Hyderabad House followed by a cup of tea and the deal was done. The personal chemistry between the two leaders did what the officials of the two countries could not hammer out the accord in six years.

The landmark breakthrough must have brought smiles back on the face of Dr. Manmohan Singh, the architect of the deal in 2008. Mr. Singh, who had staked his premiership on the deal that made India the sixth legitimate atomic power, however, failed to cross the last hurdle on the controversial liability issue. A dream nurtured by Dr. Singh has finally come to the fruition. Experts believe the deal, which will not only help inflow of billions of dollars in nuclear trade, will also establish an enduring strategic partnership between the two countries. Though there are several intricacies which need to be ironed out, the operationalising of the nuclear deal will certainly prove to be a game changer for both the countries.

The two countries also added a punch to the defence ties by renewing their 10-year Defence Framework Agreement, by agreeing to pursue joint development and production projects. As per the agreement, both countries have decided on four pathfinder projects under the Defence Technology Transfer Initiative, including joint production of Raven drones and systems for Lockheed’s C-130 transport planes. For the first time, the two countries will explore jointly developing jet engine technology. In the words of US Defence Secretary Chuck Hagel, the Indo-US agreements on defence cooperation promise to open a new chapter in bilateral military ties.

Prime Minister Modi’s ambitious goal for solar energy also got a big boost when President Obama promised additional financing to speed this expansion. India needs investments of 100 billion dollars over seven years to boost the country’s solar energy capacity by 33 times to 100,000 megawatts. During his visit to the US last year, Mr. Modi had promised renewable energy companies an easy access to Indian markets.

The two leaders have also set an ambitious five-fold increase in annual trade to 500 billion dollars. The two sides have agreed to establish several bilateral mechanisms to explore opportunities to give a boost to business, trade and investment ties. They also agreed to resume talks on long-pending Totalisation Agreement that will benefit millions of Indians working in the US with regard to social security taxes.

While the two countries failed to ink comprehensive deal on climate change, the two leaders resolved to work together to reduce the threat of greenhouse gas emissions on the world’s climate.

Another big takeaway of the visit is the strategic cooperation in the Asia Pacific to Indian Ocean. The decision to advance their shared security concerns in the region has rattled China which has running territorial disputes with the Philippines and Vietnam in the South China Sea and with Japan in the Senkaku Islands. Its frustration was manifest in a statement from China’s foreign ministry which was critical of the Indo-US joint statement. China’s official news agency Xinhua termed Obama’s visit to India as a symbolic exercise because of the superficial nature of relations between them.

That apart, the visit has, no doubt, reinvigorated the bilateral ties which had remained stagnated for the last few years.  But as Mr Modi rightly cautioned work was still needed to create a solid partnership between the world’s two largest democracies. It is hoped the two leaders will succeed in converting a good start into lasting progress