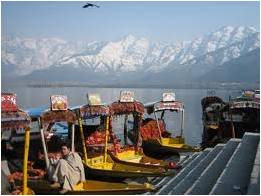 The separatist onslaught propagated by Pakistan in the Kashmir valley is being played out as much on the political, administrative and economic machinery of the state as it is on the minds and psyche of the Kashmiri people dwelling both within the valley and beyond. In fact, the poisoning of the minds of the Kashmiris began much earlier than the instigation of acts of terror in the valley. This was carried out under a well thought out strategy which followed a detailed blueprint. The ultimate aim of all subversive activities was obviously to cause harm to the Indian state. For Pakistan, to openly indulge in what would amount to interference in the affairs of another nation, some nature of legitimacy had to be created. The first step in this

direction was to reduce the Kashmiris and the Pakistanis to a common denominator. In order to achieve this it was essential that the Kashmiri identity be equated with the Muslim identity.

Since Kashmir was essentially a cultural region with strong secular credentials, the first step to be taken was to discredit the cultural ethos of the region. This was achieved through organisations such as the Jama’at-e-Islaami. Established with the intent of dispensing the teachings of Islam and ensuring the spread of the religion, the organisation worked through a network of seminaries known as dargahs and madrassas. It endeared itself to the common Muslim of the valley by denigrating such decadent social customs that involved unnecessary expenditure and effort on the part of the common man which he could ill-afford. In addition, it decried the continuation of such cultural practices and criticised these as being essentially Hindu in nature. Under the garb of simplification of lifestyles and spreading the teachings of Islam, this organisation was used as a conduit to channelise the fundamentalist principles of Islam and paddle anti-India sentiment.

The Kashmiri Muslim was convinced that he was being hounded by India that was basically a Hindu entity and his future lay with the Muslim State of Pakistan. The Kashmiri pundits were identified as symbols of the Indian Hindu state and their eradication from the valley was projected as being of prime importance. The fact that the Kashmiri pundits were in a minority and also economically better off than the Muslim majority aided the spread of this feeling among the Muslim masses. The claim of the organisation that it was a non-political and peaceful body was nullified when it acknowledged the existence of Hizbul Mujahedeen, its terrorist wing. The spread of such fundamentalist propaganda resulted in the virtual ethnic cleansing of the valley of Kashmir whereby the non-Muslim Kashmiris, who had been residing in the valley for centuries, were forced to migrate from the valley in large numbers. This is how what should have essentially been a struggle for the expression of regional identity, acquired a religious hue.

The exercise of spreading fundamentalist propaganda did not end with the poisoning of the Kashmiri Muslim’s mind. At the international level also, Kashmir began to be projected as a Muslim issue wherein an alien force had forcibly occupied a territory and was committing a plethora of human rights violations on Muslims. This propaganda was directed at two different sets of audiences and was expected to serve two purposes. The first was to ensure a regular flow of funds to Pakistan and onwards to Kashmir from a number of primarily oil-rich Muslim nations. That the funds were actually being used to create trouble through the perpetration of acts of terror against India, Pakistan’s arch enemy and Nemesis, was a thing that came to no one’s notice or if it did, it was conveniently overlooked. The second purpose being served was that when the Indian government took cognisance of the insurgency and mayhem orchestrated by Pakistan and tried to deal with it in the light of a security issue, it was projected in international media, as a case of human rights violation and hence received lot of attention in the Western world. Interestingly, the human rights violation of the Kashmiri pundits and their resulting plight was not given the attention that was its due by anyone.

Not much has changed so far as the basic strategy in Kashmir is concerned. The rabid propaganda continues. The modus operandi applied is subtle but fairly obvious to the discerning viewer. Whereas for the consumption of the Western world, the stories revolve around atrocities committed against the defenseless and blameless, particularly women and children, the sympathies of the Muslim world are evoked by describing the killing of pious souls particularly on the brink of, and during the act of prayer. The victim who has suffered is projected as one of Allah’s own devout followers and avenging his suffering the duty of every right thinking Muslim. Thus is Pakistan’s right to interfere in the internal affairs of another nation, justified.

In such a bigoted and vitiated environment it would be naïve to even think that the situation in Kashmir is on the mend. The fact is that the conflict has reached a higher more complicated plane. It is necessary for the government and the security forces to meet this new more diabolic challenge with maximum strength and commitment. It is heartening to note that despite the negative vibes that are being engineered, the government and the security forces continue to be successful in winning the empathy of the common man. This environment which is being achieved by patience, understanding and forbearance, has to be sustained for a long period of time to reap the desired results. Hence in Kashmir, there is every reason to cheer but little space for complacency. The Nation cannot lose focus because of the happy picture of a great tourist season and normalcy that is being projected.