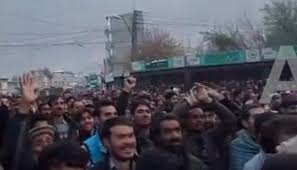 What Pakistan calls Azaad (Free) Kashmir and the region of Gilgit-Baltistan together constitute the Pakistan occupied and controlled part of the former princely state of Jammu and Kashmir that is referred to as Pakistan Occupied Jammu and Kashmir (POJK) .

The so-called “Azaad Kashmir” which is more commonly referred to as Pakistan Occupied Kashmir (POK) is the southernmost and the smaller of the two political entities which together constitute this region. It borders the Indian state of Jammu and Kashmir to the east with the boundary delineated by the Line of Control (LOC); Pakistan’s Khyber Pakhtunkhwa province to the west, the Pakistani-controlled territory of Gilgit-Baltistan to the north and Pakistan’s Punjab Province to the south. It has its capital at Muzaffarabad.

The LOC has remained unchanged since the 1972 Shimla Agreement, which bound India and Pakistan “to settle their differences by peaceful means through bilateral negotiations.”

Gilgit-Baltistan formerly called the Federally Administered Northern Areas (FANA) is the larger political entity of the occupied territories with an area of 72,496 square kms. It is directly administered by Pakistan as a de facto dependent territory, i.e., a non-self-governing territory. However, it has ostensibly been granted “full autonomy” on August 29, 2009.

In POJK citizens have no right to buy land and move freely in the rest of the country. The bishop of the Islamabad-Rawalpindi wanted to make a school and a Chapel in Muzafarabad but permission was refused and he was told that non-Muslims are not allowed to own land.

According to some socio-political analysts, Pakistan wants a 100% Muslim (predominantly Sunni) population in the occupied territories in order to retain complete control. The situation would, at a later stage, assist in the wholly illegal claim that the country wishes to make on the entire state of Jammu and Kashmir. It is a diabolic game plan, unlikely to succeed, but made with evil intentions.

It is for this reason that the demographic pattern in the region is being changed, with full support from the federal government, by settlement of Pakistani Punjabis and Pushtuns over there.

The extent of the depravity of Pakistani society has now also reached Israeli newspapers where a journalist has highlighted the case of Kainat, a 13-year-old girl who wanted to become a doctor but was drugged, kidnapped and gang-raped for four days before she escaped back to her family. Instead of the usual custom of an “honor” killing, the family fought for justice. The police refused to act, because the rapists were powerful in their community.

This is the methodology being used by the powerful state apparatus to subjugate the people, virtually enslave them and take possession of their land. It is the land that the Pakistani establishment covets; the people are secondary and even dispensable.

The people of the region are no longer ready to take things lying down. They are coming out in large numbers to protest against the arbitrary manner in which they are being treated.

In mid-March this year POK witnessed massive protests over a demand to abolish the “Azad Jammu and Kashmir Council” that exerts overwhelming federal influence in the governance of the region. The council functions under none less than the prime minister of the country.

“People of Kashmir feel Pakistan has been ruling over us through the Kashmir Council. It needs to be abolished,” said Ishtiyaq Ahmad, a leader of the United Kashmir People’s National Party (UKPNP) as quoted by ANI. Such protests have been intensifying of late.

The people of the region, who have been denied basic fundamental rights since partition of the country, are now openly protesting despite the threat of extreme brutality that the Pakistani establishment resorts to in order to quell their voices. Such is the frustration of the people that they are ready to face danger to their very lives for the sake of their future.

“Exploitation of natural resources in POK and Gilgit-Baltistan has deprived the natives of the region of their natural wealth. Pakistan is plundering our natural resources without consultation of the local population. Mega projects in the disputed territories of POK and Gilgit-Baltistan is a clear violation of the United Nations resolutions on Kashmir and other international laws,” says a statement of the UKPNP as quoted by ANI.

It is now a common sight in POK for activists to be seen on the streets chanting slogans like “We want freedom,” ‘Down with Lent Officers,” “Foreign forces quit from Jammu and Kashmir,” “Stop plundering natural resources of POK and Gilgit-Baltistan.”

The China Pakistan Economic Corridor (CPEC) is designed to pass through the occupied territory of Gilgit-Baltistan. This passage through an area which is under international dispute and not part of Pakistan is, by itself, illegal. It is also immoral to the extent that permission for the passage has not been sought from the locals.

While China is busy with its plan to ingress and colonise Gilgit-Baltistan, it is also curbing the age old trade links that the locals have established with their Chinese counter parts across the border. There are many instances of traders from Gilgit-Baltistan marrying Chinese women when they go across to establish business ties. Now China has detained these women and has literally stopped the trade practices that have been in place since millenniums. The idea is to allow trade and movement only under the aegis of the government machinery through CPEC. The people, already deprived, have now lost their business and their families too.

To call the region Azaad (free) is the biggest joke that Pakistan can play on a hapless people whom the state is blatantly exploiting for the benefit of the small Punjabi elite that rules the country. The world needs to come alive to the plight of the people and take tangible steps to ameliorate their suffering. India needs to take a proactive lead in this regard.

(Farooq Wani is a senior journalist and political analyst)