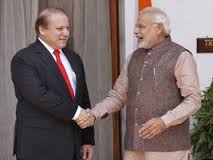 The electronic media in India on Monday, August, 18, was inundated with the visuals of Kashmiri separatists in New Delhi looking like the proverbial cat that has got all the cream; they had been called to New Delhi by the High Commissioner of Pakistan for discussions as a prelude to the Secretary level talks between India and Pakistan slated for August, 25. Desperate to make the most of this out of the blue opportunity to come out of hibernation, the separatists they put on a purposeful look and gave sound bytes to the media as if the fate of the two nations rested on their shoulders.

The government of India put paid to their feeling of self-importance and Pakistan’s obduracy by cancelling the talks altogether. The burning question now is whether India was right in canceling the talks in this seemingly abrupt manner or not.

The visit of Prime Minister Nawaz Sharif to India to attend the swearing in of Prime Minister Narendra Modi followed by the warm interaction between the two leaders the next day and the exchange of gifts created an environment of positivity. Nawaz Sharif added to this sentiment by not referring to Kashmir at all in his interaction with the media and breaking tradition by not meeting the separatists. There was a feeling that relations between the two Nations will take a turn for the better.

The feeling did not last too long; Nawaz Sharif had not even landed back in Pakistan when India was subject to incessant firing from across the line of control and the international border; there was also a drastic increase in the number of infiltration attempts and terrorists strikes in the valley.

The manner in which the situation developed made it amply clear that Nawaz Sharif has no say whatsoever in the Kashmir policy of his country. This subject was in the hands of a power bigger than the government of Pakistan which is, quite obviously, the Pakistan army and their jihadi partners. The Jihadis who were once considered to be “strategic assets” of the Pakistan Army are now strong enough to dictate terms to their erstwhile masters. This is evident from the fact that even as the army is involved in a virtual civil war in North Waziristan it has to comply with the Jihadi requirement to keep ceasefire violations and infiltration bids going against India on the eastern front. No army worth its salt will open two fronts unless forced to do so. It is, therefore, amply clear that Jihadis are no longer underlings but senior partners in the unholy game being played out in Pakistan against India.

Under the circumstances it serves no purpose talking to Nawaz Sharif or his government. Prime Minister Narendra Modi seems to have understood this quite early in his tenure. He set the pace for his policy by visiting the state of Jammu and Kashmir twice within his first two months in office and each time interacting with the soldiers deployed there. By doing so he sent out a clear message that he will stand by the forces in their effort to counter any type of misadventure by Pakistan. He also gave an open hint to Pakistan that he does not consider the country to be in a position to engage India in a conventional war and as such it should be more circumspect in its dealings with India.

Pakistan should have got the hint there and then; unfortunately it did not do so; instead of exhibiting a degree of maturity it adopted an old and wholly misconceived policy of heating up the line of control and international border to unacceptable levels and then rooting for inclusion of the Kashmir issue in the scheduled secretary level talks. Flustered by the lack of response from the Indian side or maybe taking it as a sign of the traditional weakness that India has been exhibiting in its policy Pakistan decided to put on the pressure by calling the separatists to New Delhi.

It is common knowledge that the separatists stand totally marginalized in the affairs of Kashmir itself not to talk of the rest of the state where, in any case, they have never had any political presence whatsoever. By calling them to New Delhi Pakistan was not looking for any meaningful and substantial contribution that would strengthen its negotiating power in the impending talks. It was simply a childish, egoistic exercise in futility of a type that the country revels in.

Pakistan was told to retract the decision, it did not do so. India took the only honourable recourse left open and cancelled the much awaited talks. Not only that, India has demonstrated its strong will by calling for an unequivocal apology from Pakistan for having interfered in the internal affairs of the country. Such a stand by India has no precedents. The so- called Pakistani experts who are invited by Indian channels for discussion were found floundering in an attempt to cover up the blunder. Why these gentlemen have to be invited on Indian media at all is a question that also needs to be debated.

The question that is being asked is – what has changed for India to react in such a forceful manner? After all Pakistani officials have been meeting the separatists earlier also. The answer is simple – the government has changed and there is a policy shift for the better. An overwhelming majority in India and probably the world feel an affinity with the righteousness and justification of the principled stand taken by India.

Pakistan has done what it could do to destablise India and has failed miserably in its efforts as it will in the future also. The country should remember that peaceful coexistence is more its requirements than India’s. Now the ball is in Pakistan’s court – it can change its attitude and come across with sincerity or it can continue to dwell in isolation.