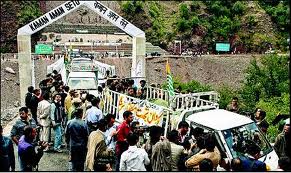 Confidence Building Measures (CBM’s) between India and Pakistan, quite fragile in the best of times, are going for a toss yet again with the stand-off regarding narcotics smuggling from Pakistan through the conduit of cross line of control trade continuing for almost two weeks despite diplomatic intervention at the highest level. It is obstinacy on the part of Pakistan that is preventing a break through. As usual, Pakistan is making all the right noises about being committed to resolving the impasse in view of the importance of the CBM involved, yet, the country is stretching the matter.

A truck carrying 114 kg of brown sugar worth Rs 100 crore, along with its authorised trade cargo of dry fruits, was caught by the Indian authorities at the Aman Setu trade post. Obviously, this is not something that the Indian authorities can wish away. Detention of the driver for purposes of investigation invited a belligerent response from the Pakistan authorities who detained 21 Indian trucks even as 49 Pakistani trucks are in Jammu and Kashmir. In the meantime trade has come to an abrupt halt.

While the investigation and the diplomatic effort are on, it would be worthwhile to dwell on the magnitude of the drug smuggling that has come to light of late and the effect that it can have on the people, especially the youth of the valley. This is not the first time that an incident of this nature as come to light, on July, 01, 2013, one Sajad Khan s/o Nazardin was arrested with a drug haul. Again on May, 25, 2013, one Majid Khan s/o Mohammed Khan was arrested at Kud near Patnitop with six packets of brown sugar, some cocaine and charas; both the arrested individuals belong to District Baramulla near Uri where the Kaman Post for cross-LOC trade is located. On August, 02 2013, nine packets of brown sugar were apprehended by the Police at Seeri, between Baramulla and Uri. The aforementioned incidents give a clear indication that contraband is entering the Kashmir valley under cover of the cross-LOC trade.

An enterprise of this magnitude can be run only by people who have tremendous financial and political clout. It is for this reason that advanced technology is not being used for screening of all trucks despite knowledge of the illegal and highly dangerous activity that is taking place. Such is the power of the people who are running this highly lucrative racket that attempts to upgrade facilities with appropriate technology to carry out thorough scanning of the cargo are sabotaged. Security agencies have been insisting upon the need to install full body truck scanners since 2007 to no avail. In fact, certain separatist leaders have been voracious in expressing displeasure with respect to the security check being carried out at the facilitation centres and have been demanding that the security checks be done away with all together. No prizes now for guessing as to why this demand is being made.

While the truck drivers of both sides are enjoying an impromptu holiday and playing volley-ball in the adjoining trade facilitation centres of the two countries, one cannot help get an impression that the matter is being stretched by Pakistan with the intention of diffusing, to an extent, the seriousness of the crime being committed under the umbrella of trade. The idea is to keep the matter focused around the release of the truck drivers so that the actual problem of contraband is sidelined.

Another indicator of the policy of creating a smokescreen being followed by Pakistan is the ceasefire violation that has taken place in the area after a long hiatus. On The January, 26, 2014, when India was poised to celebrate its Republic Day, Pakistani troop’s resorted to unprovoked firing near Kaman post close to Aman Setu – the bridge used for the cross border trade and movement of people between the two regions. Significantly, this is the first ceasefire violation since the Director General’s of Military Operations of the two nations met at Wagah border and agreed to maintain tranquility along the line of control. The Pakistani authorities are aware that maximum pressure for conduct of a thorough investigation would be coming from the army hence they are resorting to such pressure tactics.

India has, very rightly, taken a firm stand on the issue. While asking Islamabad not to hold the vital CBM hostage to what is essential a criminal issue, Indian authorities have stressed that the due process of law be allowed to be followed. “The governments are in communication but we wish to clarify that there is no modality that exempts a person alleged to be involved in a criminal activity from facing the full force of Indian law. The spirit of CBMs on trans-LoC trade and travel is to bring about humanitarian benefits to the people of J&K. To us it is surprising that these CBMs have been chosen by Pakistan to be held hostage for the sake of persons indulging in drug trafficking,” says Syed Akbaruddin spokesperson of the Indian Ministry of External Affairs.

Kashmir is already grappling with a serious drug problem; now it is quite evident as to where the supply is coming from. The question that arises here is – is the CBM so important that we can, for its sake, put the future of the Kashmir youth in jeopardy? Since the answer is very obviously in the negative, the best recourse is to stick to a righteous stand and punish the culprits caught in the act. It is also necessary to identify those in Kashmir who are a party to this nefarious activity and bring them to book. After all, the trade cannot flourish without local assistance, so putting own house in order is as important as streamlining the transportation process. Indian authorities should also ensure that all checks are in place to stop the movement of contraband in the vehicles crossing over from Pakistan despite the pressure to open the route totally.