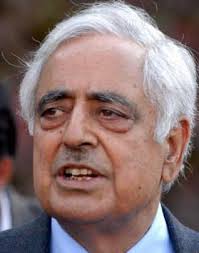 Now that everybody has had his time “on air” talking about the ills of Mufti Mohammad Sayeed freeing Hurriyat member Masarat Alam, it is time to look at the matter rationally. One would hesitate from calling Masarat Alam or anybody else from the Hurriyat a leader since they have a negligible following in the Kashmir Valley and zero following across the rest of the state. Under the circumstances, the question arises – is the confinement or freedom of someone like Masarat Alam a big enough issue to occupy prime time days on end?

The people of the Kashmir Valley have moved on emphatically since the times when Masarat Alam could generate social disorder in the form of stone pelting and such like disruptive activities. The people now have a single point agenda of improving upon their living conditions with development of infrastructure and improving upon their lifestyle with more avenues of work and opportunity. This sentiment was reflected in the form of a massive voter turnout in the assembly election, and as such, it has become the overwhelming mandate for new government.

Masarat Alam and his ilk do not fit anywhere in this scheme of things. Their being in or out  of prison would hardly make any difference in the changed environment of the state of Jammu and Kashmir in general and the Kashmir Valley in particular. In fact, Masarat being out of prison and unable to generate the kind of aura that he had earlier would constitute the best method of sidelining him and placing him in the same insignificant niche where his contemporaries of the Hurriyat conglomerate are presently wallowing.

It would not be out of place to repose enough faith in the capability of people of the Kashmir Valley and the security forces deployed there to meet any challenge thrown up by the likes of Masarat Alam. Surely, the situation of normality in the Kashmir Valley that has been achieved with great effort and sacrifice is not so fragile that a single person can disrupt it. Such thinking would amount to giving too much to the individual and too less to the people who have who have made tremendous sacrifices to bring about a change in their lives.

One would also like to dwell on the merits or otherwise of the actions taken by the newly anointed Chief Minister of Jammu and Kashmir, Mufti Mohammad Sayeed. In the first few days of his assuming office, he has shown an embarrassing haste in highlighting outdated political issues rather than concentrating on the basic factors for which he was elected by the people of Kashmir and offered a coalition by the representatives of the people of Jammu.

The Mufti has been conspicuous in his inability to speak even one word of encouragement for the flood affected people whose rehabilitation should be his first and foremost responsibility. There is no news about a Cabinet meeting to decide the course of action to give a fillip to the development agenda. There is no news of a meeting of the Unified Command of which the Mufti as chief minister is ex-officio chairman. How does he propose to tackle the sensitive political, administrative and security situation without meeting his colleagues, security commanders and advisors?

While dwelling on the priorities that the chief minister has set for himself, one feels that he is stuck in a time-warp. He wants to start where he left more than six years back, without realising that the situation has take a turn for the better in the interim. He may want to believe that the National Conference-Congress alliance did not achieve anything, but that would be quite untrue; the sooner he gives them credit where it is due the better for him since such an understanding will lay the foundation of his future course of action.

The Mufti is failing to grasp the changed priorities of the people of the state, instead, he is harbouring a grandiose illusion of positioning himself as a world leader who played a path breaking role in the resolution of the Kashmir issue. It seems that he is more eager to get the Noble Peace Prize rather than getting into the nitty-gritty of governance.

Interestingly, the Hurriyat camp is unlikely to be very happy with the chief minister’s magnanimous gesture. It was more comfortable with the idea of a martyr Masrat Alam behind bars than an active Masrat Alam in their midst. The worst affected is Syed Ali Shah Geelani who can do without an heir apparent breathing down his neck at a time when he is fighting ill health and growing political isolation. He must be getting nightmares of dying in ignominy. With Masrat Alam in the reckoning Mirwaiz Umar Farooq will find it difficult to play his proverbial balancing act as a right wing extremist with a moderate mind-set; the likes of Shabir Shah and Yasin Malik are in any case finding it difficult to stay afloat and get some money out of Pakistan and other financing agencies. They can do well without competition.   For all practical purposes, it would seem that this birthday gift to the Hurriyat by the Mufti has gone horribly wrong.

Chief Minister Mufti Mohammad Sayeed should understand that he has been elected not to resolve the political issues of the Kashmir imbroglio but to provide much needed good, clean and efficient governance that can catapult the people from their existing distress to economic and social well being. In case he is finding it difficult to get out of the time warp then his coalition partner, the Bharatiya Janata Party (BJP) and the people should impress this reality upon him and-  the sooner the better.