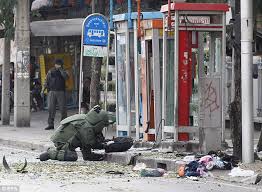 One of the worst attacks in Bangkok, dubbed as the tourist paradise of southeast Asia, threatens to revive fears of a return to political violence and instability that has troubled Thailand for more than a decade. The attack on Monday, in which at least 20 people were killed and more than 120 injured, is a major security and intelligence failure for the ruling military junta which seized power in a 2014 coup. Any further delay in unraveling the mystery behind the attack will discredit the junta, which has repeatedly failed to return the nation to democracy. Having missed a self-imposed 2015 deadline for an election and ruling out the possibility of election before 2017 is causing heartburn among those who oppose military rule.

Since no group has claimed responsibility and the authorities have not been able to home on to suspects, it would not be prudent to speculate about the perpetrators of the attack. But suspects are too many. Police has not ruled out the involvement of any group, including elements that are opposed to the military government. Junta chief Prayut Chan-O-Cha has obliquely pointed fingers at the Red Shirt movement aligned to the deposed government of Yingluck Shinawatra and her self-exiled brother Thaksin Shinawatra.  He sent a Facebook messages warning of an imminent danger to Bangkok came from an “anti-government group”.

The Shinawatras enjoy immense popularity and respect among the rural and urban poor. Both, the brother and the sister have been prime ministers previously before they were unceremoniously ousted by the military rulers.

While the love-hate relationship between the Shinawatras and the military is an open secret, it does not seem plausible that their supporters will carry out such an audacious attack on a Hindu temple to avenge their ouster or discredit the military. Such an action risks alienation from the people and may even cost the Shinawatras their political constituency.

Moreover, the modus-operandi of the attack does not match the tactics of the Red Shirts who have been involved in several low-level attacks in the past, intending to cause maximum damage to the property than targeting people at such a large-scale. The preliminary investigation suggests that the attackers wanted to inflict maximum casualties as the bomb was timed with the heavy rush of office workers and tourists in the area.

The military junta may be groping in the dark but its suspicions have been heightened by recent statements by Thaksin Shinawatra who called upon his supporters to reject a new constitution that the junta plans to put before the country in a referendum. Critics have dubbed the draft as undemocratic which they say is intended to empower the military and limit the influence of elected politicians.

It should be recalled that Thailand has been plagued by insurgency for more than a decade. Muslim insurgents in the south of the country bordering Malaysia have been fighting Thai rule. They oppose the presence of majority Thai Buddhists in the largely Malay region. Thousands of people, mostly civilians, have died in the insurgency in which bomb attacks are common. Of late, the Muslim insurgents have expanded their network and have launched targets at Hat Yai, which is a popular destination for Malaysian tourists. Last year, more than a dozen people were injured when a series of low-intensity bombs ripped apart Hat Yai, the southern tourist town. The bombings were the second time in two years to hit Hat Yai. But the insurgents have rarely targeted Bangkok before.

In fact, the army chief and deputy defence minister General Udomdej Sitabutr seemed to give a clean chit to the Muslim insurgents when in a televised interview he said the Monday’s bombing did not have the insurgents’ footprints. But they do seem to have an ulterior motive in carrying out attack on popular Buddhist or Hindu shrine to advance their broader objectives. Not only will it hurt Thailand’s economy, its tourism industry, but the reputation of the military rulers, as well.

Another possibility could be the involvement of ethnic Turkic-speaking and largely Muslim minority Uighurs. There has been growing anger among Uighur people after Thailand forcibly repatriated more than 100 Uighurs to China. The Uighurs vehemently oppose cultural and religious persecution by Chinese authorities. However, security experts are of the view that though there are radical elements in the Uighur movement, an attack on this scale outside China appears unlikely. But China’s claims that more than 100 ethnic Uighurs deported from Thailand had been on their way to Turkey, Syria or Iraq to wage holy war can’t be brushed aside. And if China’s assertions are true, then it should ring alarm bells.