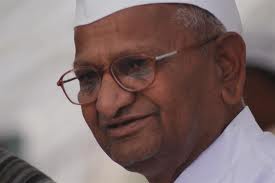 Where is Team Anna heading to? With the disgusted patriarch opting for a Maun Vrat (A fast of silence) the team has become a meteor let loose. The activities of the team members are now driven more by self interest and media sensationalism rather than logical, nationalist, viewpoints which were their forte all through the anti-corruption agitation. In fact, one wonders as to what happened to the original agenda of fighting corruption for which this team came together in the first case? The issue is now nowhere in the team member’s order of priorities, instead, they have got embroiled in political movements that are inimical to national security and integration. Only a few days back, Prashant Bhushan, a member of Team Anna was beaten up by irate nationalists agitated over his demand for holding a plebiscite in Kashmir. Now we have yet another group of so called social activists, who also owe allegiance to the Anna movement, launching a march from Srinagar to Imphal to press a demand for abrogation of the Armed Forces Special Powers Act (AFSPA) in J&K and the North-East States. This exercise in futility has been called the, “Save Sharmila Solidarity Campaign” (SSSC). The objective of this group is to show solidarity to Irom Sharmila who has been on a hunger strike since the last one decade to press her demand for abrogation of the AFSPA in her home State – Manipur.

Before proceeding any further, it would be apt to give to the esteemed members of this group an update on the situation in Manipur, especially the capital city of Imphal, where they propose to culminate their march on October, 27, 2011. Imphal has been under an economic blockade for more than two and a half months now because of a stand-off between the Meities and the Nagas – the main tribes inhabiting the region. Each tribe is looking for political supremacy and in the resultant destablised conditions the common man is suffering untold misery- hunger, abject poverty, spiraling prices, shortages, lack of development, education, health care etc. Such blockades are a common feature; a similar one took place last year and lasted for 62 days.

Are these blockades being caused due to the imposition of the AFSPA in the region? Certainly not; in fact, such anarchy and mayhem came about only after the AFSPA was removed from Imphal giving way to rampant political opportunism. The Army is no longer ready to intervene in what it views to be an internal strife and the result is there for all to see. Under these circumstances, the current agitation launched by the SSSC is out of sync with reality and not in tune with the actual problems which plague the region. If these so called social activists actually wish to help the people of the beleaguered and strife torn region they should be telling Irom Sharmila to forget about her fast and direct her energy towards resolving the internal conflict. By targeting the Army personnel, those very people who are best suited to assist her in bringing about a semblance of law and order in her home State, she is only putting the cart before the horse. Till now, the poor girl was a tool in the hands of her family members and supporters who harboured vested interests, now she is being set up for exploitation in a much larger arena.

It is quite interesting to note that the moment a person manages to gain some media attention he/she suddenly becomes a champion of the so called Kashmir cause. First it was Arundhati Roy, who, out of the blue became an expert on Kashmir, then there are mavericks like Gautam Navlakha and now we have in our midst the newly anointed media persona, Prashant Bhushan, waxing eloquent on the Kashmir cause. What is it that suddenly impels these people to take an anti-national, pro separatist posture on the issue? It cannot be concern for the people about whom they know less and care for lesser. Surely there has to be some valid reason or some consideration for this sudden deviation from their core competency towards something that they have never been engaged with earlier. Such is the low level of knowledge that Prashant Bhushan is advocating plebiscite for Kashmir, something that has, since long, been rejected not only by India but also Pakistan and the separatists of Kashmir. None other than Pervez Musharraf put a lid on this concept a long time ago. Prashant Bhushan did not do his home work well, he spoke out of turn and out of context, no wonder he was manhandled and his mentor was forced to go on Maun Vrat.

Obviously, Anna is much better informed about security issues than his protégés, hence, he has chosen the path of silence to ensure that he remains unsoiled while his followers go about making a fool of themselves. Incidentally, those advocating the separatist line of thought often say that they are simply expressing the opinion of the people. The manhandling of Prashant Bhushan and throwing of shoes at Arundhati Roy also constitutes the voice of the people and a larger segment than the one that they refer to. What is good for the goose is good for the gander, they should give due cognisance to this predominant voice while espousing the cause of Kashmir and not restrict themselves to a few motivated lobbies.

The mandate of the people of India is loud and clear, Kashmir is an integral part of India and all those who say otherwise are anti-national. Further, imposition or abrogation of the AFSPA is a decision to be taken by the government after due deliberation and assessment of the security situation, interference in this very sensitive subject by social activists is neither called for nor is it in order. The fact that the people of India fully support these views will become very apparent as this so called campaign withers into ignominy.