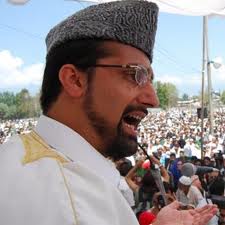 While winter has descended in full force on the valley of Kashmir, it has not in any manner served to slacken the pace of things in the region. Politically, the region continues to be as full of activity as ever. The priorities of course may have shifted. This was fairly obvious even in the nature of issues taken up by the Mirwaiz in his weekly sermon delivered last Friday.

In a complete break from tradition, the Mirwaiz did not dwell on azaadi for Kashmir. Instead he chose to train his guns on the State government for having failed to perform on the governance front despite having fought and won the election on the plank of good governance. He bemoaned the inability of the State Government to provide such basic amenities as electricity, water and good roads. Very superciliously he claimed that the separatists had left such so called mundane issues to the state government, thinking the latter would be able to deal with them while the separatists themselves concentrated on the higher objective concerned with the aspirations of the people as they perceive them to be. He further added that in the event of the government failing to deliver on these fronts, the separatists would not hesitate from taking up such causes.

Understandably, the content of the Mirwaiz’s sermon made it to the headlines of most national and regional dailies. Whereas the fact that the Mirwaiz’s attention has veered towards such issues that are vital to the survival and welfare of the common man in the valley is a welcome sign, the reason and timing of this sudden shift in focus does arouse a measure of curiosity. This is especially true considering the fact that till just a few months ago when the economic well-being of the valley were being held to ransom by the Mirwaiz’s “brother in arms” Mr Syed Ali Shah Geelani, the Mirwaiz offered tacit support by refusing to speak up on the issue. Not only that, every effort made by the governments at the state and central level to seek a solution to the Kashmir problem has been met with stiff resistance from the Mirwaiz. Every developmental initiative, including the additional generation of electricity, by the state has t best been belittled. One wonders why the Mirwaiz did not voice his concern for good governance when Geelani, every Friday, released a fresh weekly calendar scheduling ways and means of derailing the smooth governance of the state? Is education not part of good governance? And is the effort to derail the provision of education by not allowing schools to function and stopping students from attending school not worthy of criticism by any responsible citizen? Why then did the Mirwaiz not speak up? And if he did not speak out then, what moral and ethical right does he have to demand good governance at this juncture?

There appear only two rational reasons for this sudden shift in the perspective of the Mirwaiz. The first is the fact that the issue of “azaadi” for Kashmir is fast losing credibility. The reasons for this may be traced to a general shift in international opinion where agencies at large are beginning to tire of the unending and unwarranted violence being perpetrated in the name of ethnic conflict. Another reason is the story emerging from within Jammu and Kashmir post the appointment of the interlocutors. The issues vital to the population are far removed from independence. Probably related to this is the fact that the whole separatist movement is losing its steam and hue as a people’s movement. The manner in which apparently spontaneous protests by the people had in reality been planned and orchestrated has come to light. This is especially true in the case of the much-hyped “stone pelters” of the valley. At a loss for issues to stay alive in the political domain the Mirwaiz has now jumped on to the bandwagon of “good governance”. At a time when winter has set in and life is hard in the valley, talking about such issues is no doubt going to fetch him the much-needed brownie points.

However, the Mirwaiz would do well to remember that rights and duties are interlinked. While good governance is no doubt the duty of the State and the privilege of its citizens, a responsible and socially conscious behaviour is an obligation that the citizens must discharge towards the state. Duties at the ethical level include loyalty towards the state and its apparatus and a respect for state policy. At the legal level duties comprise remaining within the bounds of the law of the land, paying taxes and user charges levied by the state in return for services provided and a respect for State property. In regard of all the above, the Mirwaiz’s behaviour is not exactly commendable. In addition to the tacit support that he has been offering to lawbreakers and protests that lead to the loss of life and property in the State, the Mirwaiz could even be questioned regarding his income tax returns and the payment of his electricity bills.

Finally, one wonders whether it pricks the Mirwaiz’s conscience to know that the very same Army that he and those of his ilk are demonising always has and presently is playing a vital role in keeping the valley alive throughout the winter. While the people are staying indoors due to the intense cold the Army is not only out ensuring the security of the region it is also keeping the roads open, providing shelter to supply trucks and passengers

who get stranded on the highway, giving medical aid to the needy in remote areas and employment to the youth when there is none other available. In fact the list is endless. It would serve him well realise the people whose cause he portends to espouse are deeply beholden to the Army especially during the winter months.