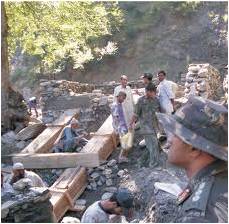 Terrorism was inflicted upon the people of Jammu and Kashmir by inimical foreign forces almost three decades ago. Sustained counter terrorist operations were launched by the army. In due course these operations received active support from the people and today terrorism has been contained to a great degree. All through the two decades of peak terrorism the people of Jammu and Kashmir, especially those living in remote inaccessible areas, suffered tremendously. Not only were they targeted by the terrorists, there was also a complete breakdown of administration which caused great suffering. The army, being the only institution at hand to provide support to the beleaguered people, realised that it would have to look after their administrative needs along with fighting the terrorists. It was under these circumstances that the Army launched Operation Sadbhavna, a welfare project aimed at providing support to the people, especially victims of terrorism. Under Operation Sadbhavna, infrastructure was developed in order to keep civic amenities in some working condition during the difficult times. Water lines, electricity, roads, bridges etc were constructed and repaired in remote areas. People centric initiatives like organising medical camps, education of children, vocational training etc were undertaken. Over all the concept was a resounding success; it not only kept the social and administrative fabric of the state intact but also helped develop a unique bond between the people and the Army which ultimately led to obliteration of the cult of terrorism.

In 2003, a noble initiative was launched by the army under Operation Sadbhavna. The project entailed conversion of the traditional “Gharats” on streams and springs in hilly areas into Mini-hydel Electricity Projects (MHEP). The aim was to utilise flowing water to provide electricity to remote areas by modernising existing assets. The need was there since provisioning of electricity by the State Electricity Board was hindered due to active militancy, lack of funds, unwillingness on the part of employees and contractors to work in remote areas etc. A technology kit to upgrade the Gharats to perform multi utility functions was procured from an environmentalist, Dr AK Joshi whose Non Government Organisation, HESCO, had done some sterling work on the concept in the state of Uttaranchal. The Army first set up an experimental plant at Udhampur to explore the technology and then took up eight projects in different parts of the State; these were a resounding success.

The Army was keen to get on with the project on a standalone basis but it got the attention of the government at the centre and was incorporated as a part of the Prime Minister’s Reconstruction Programme, 2004. The government decided to exploit the expertise of the Army to reach out across difficult areas in all three regions of the state and construct 1000 MHEP’s. The Army was made responsible for 300 plants; the Border Area Development Project was given 265 plants and Ministry of Non-conventional Energy Resources agreed to finance 435 plants. Resources from these departments were provided to the army to carry out the construction. On completion of the projects the same were to be handed over to village committees in situ who were to take over the same on behalf of the civil administration. Upkeep of the plants including their manning, maintenance, operation, serviceability, charging of tariff etc was to be the responsibility of the local bodies, under the purview of the State government.

Thus, the Army was responsible only for constructing the MHEPs and handing them over to the local administration. Accordingly, the army handed over all the MHEPs from 2004 to 2006 in a functional condition to representatives of village committees and the local administration. Army sources have confirmed that proper handing/taking over certificates with name of village, location of MHEP, photographs of the project were obtained. All details of MHEPs and their locations were intimated to the relevant State government departments and the Ministry of Defence for onward submission to the relevant Ministry.

Recent news reports suggest that of late the plants were inspected by some departments of the State Government and found to be unfit. It is also being implied that the construction of the project was of poor quality, with fingers being pointed directly towards the army. However, to apportion blame on the army years after the last project was handed over is not in the right spirit. If no attention has been paid to the plants and no funds earmarked for maintenance for six long years, naturally, they would be out of service. Actions of this nature can only lead to acrimony and distrust which the State can ill afford.

Coming back to the State of the MHEPS, if what the reports say is true then it is indeed an unfortunate circumstance given the utility of the concept in remote areas of the State. There is every reason for the State government to overcome its apathy and set things right without indulging into any sort of blame game. The projects need to be revived for the benefit of the all important grass roots populace of the remote areas who deserve a better quality of life after suffering deprivation for many decades. In case the state government is still not in a position to take on the process of revival of the projects it can approach the army for necessary assistance. It can be reasonably deduced that the army would be forthcoming in view of its bond with the affected people.