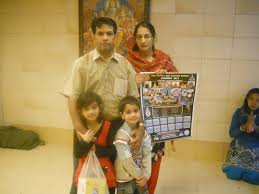 “You are free; you are free to go to your temples, you are free to go to your mosques or to any other place of worship in this State of Pakistan. You may belong to any religion or caste or creed — that has nothing to do with the business of the State”. This was the promise made by Muhammad Ali Jinnah to the people of the country that he carved out of the subcontinent. The promise was, by itself, contradictory since the very reason behind the partition was to give to a particular religious segment its own homeland – how then could this new nation be expected to pursue a concept of religious tolerance and secularism?

The misfortune was that some people from non-Sunni Muslim communities attached to the land of their forefathers made the mistake of believing what was told to them; today, their off springs rue this emotional decision as they fight a losing battle of survival in a totally vitiated communal environment.

The fact that the Hindu population in Pakistan has depleted at an alarming rate has neither registered alarm nor any firm action to arrest the downslide by the government of the country. The whole process is being allowed to run its course like slow poison.

Not only is the community being systematically eliminated even the symbols of the historic Hindu foot print in the country are being razed so that future generations of “pure Sunni Muslims” do not even have an inkling of the multi-religious, multi-cultural identity of their land.

A serious development recently is the threat that the centuries old Sri Ratneshwar Mahadev temple in Clifton Road, Karachi is facing due to proposed construction of an underpass dangerously close to the building. The matter is serious enough for the Chief Justice of Pakistan to write to the Human Rights Commission of Pakistan to sit up and take notice.

The beauty is that even though land in question is evacuee property belonging to the government as part of a trust, construction is being undertaken by a civil firm belonging to a powerful local businessman. If the establishment that is required to provide protection to such heritage structures is hand in glove with plans for its destruction then the chances of its survival get wholly negated. This is exactly what is happening to the aforementioned and many other heritage religious structures belonging to the minorities in Pakistan.

A few weeks back, during the Holi festivities, a Hindu temple in Larkana, Sindh, Pakistan was set ablaze by a crowd that ran wild due to alleged accusations of blasphemy levelled against a Hindu. The frenzied mob turned violent following a rumour that one Sangeet Kumar had desecrated the Holy Quran. The police and rangers saved the man from being lynched even as the crowd vented its ire by vandalising the temple.

It needs to be noted that Larkana has a population of about two million Hindus (Mostly Sindhis) and it falls in an area ruled by the Pakistan Peoples Party (PPP) known to follow a policy of religious tolerance.

This was definitely not the first time that an incident of this nature has occurred in the Sindh Province during PPP rule. In 2012 when the PPP was in majority in both the province and the centre a crowd on the rampage against a film alleged to be anti-Islam damaged the Shri Krishna Bhagwan temple in Karachi said to be the oldest in Pakistan. The temple had not been provided with any Police protection despite the sensitivity of the situation. None of the perpetrators of the heinous crime have been brought to justice. If this is what is happening under the best possible circumstances, one shudders to think of what would be happening in other places where the Hindu population has no voice at all.

This disgusting process has been going on since the early seventies when the military dictator Zia-ul-Haq brought in the concept of fundamentalist Islam in the country. There was a famous synagogue in Karachi that was destroyed under the Zia regime. Destruction of religious institutions of minorities has seen no respite ever since.

Fundamentalist terrorist organisations that hold sway Pakistan are emerging as the biggest perpetrators of this merciless assault on religious establishments of the country. In the last few years there have been innumerable instances of Churches, Gurudwaras and Shia/Ismailia places of worship being bombed and destroyed. On September, 22, 2013 a Church in Peshawar was attacked by a suicide bomber, it suffered widespread damage even as 78 innocent people lost their lives. In January 2013, a bomb blast in a Shia mosque in Quetta led to the death of 100 people; what would have happened to the Mosque needs no explanation.

Outright destruction is just one of the threats posed to the religious places of minorities. The institutions are falling apart due to maintenance neglect in the hands of an apathetic administration. There are others which have been illegally occupied or damaged and no action has been taken by the government. Soon a time will come when these institutions will not have to be destroyed; they will fall down on their own or become the personal property of some anti-social elements. Some of these, especially the Sikh Gurudwaras, are destinations of pilgrimage for the community spread across the world.

This mindless destruction of a centuries old heritage simply has to stop!! Voices of sanity have to prevail upon the barbarism and brutality of a few who clearly have a personal interest in stoking fires of fundamentalism. The government of the country at both the federal and provincial level has a lot to do in this regard. It needs to shed its lethargy and the propensity to look the other way due to political reasons and come out in support of the minorities. A failure to do so at this sensitive stage will send out a wrong message to the fundamentalists and created a communal divide that will be difficult to bridge. In the process the age old identity of the region will be lost forever.