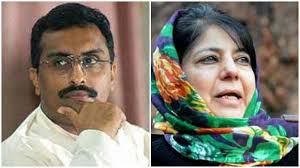 Governor’s rule was imposed in Jammu and Kashmir on January 08 2016, pursuant to the unfortunate demise of the state’s incumbent chief minister, Mufti Mohammad Sayeed. Mufti had been running a coalition government with the Bhartiya Janata Party (BJP) since March, 1, 2015.

The leadership role shifted to Mehbooba Mufti, the daughter and political heir of Mufti Mohammad Sayeed, as also the President of his Peoples Democratic Party (PDP).

The need for instituting Governors rule came by due to the reluctance of Mehbooba Mufti in naming a successor to the chief ministers’ chair. It was widely speculated that Mehbooba would herself take on the responsibility. Now it is almost a month and a half since the demise of Mufti and yet there is no sign of the coalition getting back to business.

Governor NN Vohra attempted to break the impasse by calling leaders of the coalition partners, BJP and PDP, for a meeting in early February but the result was not very encouraging. Both parties stuck to their own positions.

A second close door meeting was held on February, 18 where Shri Ram Madhav, a General Secretary of the BJP flew down to Srinagar for a meeting with Mehbooba Mufti. “Talks were positive…. I hope there will be continuation of previous arrangement,” said Ram Madhav in New Delhi. The environment once again became rife with expectation of the coalition being resurrected. Sadly, no formal statement has since been made by either party.

The two parties may be enjoying their game of “who blinks first” but the message that is going across is not one of optimism. The situation is also highlighting the immaturity and opportunism of the coalition partners.

The people of the state are feeling let down due to the inability of the coalition partners to reconcile their differences even as the world, especially Pakistan are getting a wrong message.

It is to the credit of the security forces in Jammu and Kashmir, led by the Indian Army, that attempts by disruptive forces to exploit the fragile political situation have not borne fruit. Even as the terrorists have attempted to increase the threshold of violence, the Indian Army, within this month, achieved unprecedented success in its counter terrorist operations by eliminating more than 16 terrorists in the Kashmir Valley.

The PDP wants an assurance from the BJP on the implementation of the “Agenda of Alliance” on the basis of which the coalition was formed. The Agenda of Alliance, like all Indian documents, is larger than the Constitution of America. Any person with even basic common sense would agree that it would be difficult  to implement all points given there even within a time frame of six years, which is the tenure of the government, let alone in the short term.

According to the agenda, the coalition government is expected to catalyse reconciliation and confidence building within and “across the Line of Control (LoC),” thereby, ensuring peace in the state. This, in turn, is expected to create an enabling environment for all round economic development of the state and prosperity of the people. This, in itself, involves a third party (Pakistan) which makes implementation doubtful.

This apart, the agenda calls for tangible material, economic and financial initiatives resulting in sustainable economic development; provision of smart and ethical governance; ensuring ease of doing business; provisions of autonomy to the grassroots (Panchayat and Municipal ) level and a host of other points.

It is not wonder that in this first year assessment, necessitated by the demise of the chief minister, the coalition does not have much to fall back upon in terms of achievement. It thus lacks the confidence to move forward.

Two points constitute the biggest bone of contention between the BJP and the PDP. First, release of aid to the victims of the flood of 2013; Second, revocation of the Armed Forces Special Powers Act (AFSPA).

One cannot deny the righteousness of the first point. There is a need to ensure disbursement of  the rehabilitation package in a transparent and timely manner. This, however, is possible only of there is a state government in place! If the coalition partners waste valuable time in playing political games how will the package be disbursed?

AFSPA has been the pet peeve of Mehbooba Mufti for a long time now. She has always rooted for its revocation first partially and then totally.

Here, it would be pertinent to see what the agenda of alliance has to say on the issue. It says, “the coalition government will examine the need for de-notifying disturbed areas. This, as a consequence, would enable the Union Government to take a final view on the continuation of AFSPA in these areas.”

The problem is that the state government, previous or present, have not been able to muster the courage to de-notify disturbed areas because their police force will be up in arms if they do so, and rightly so!

As mentioned earlier, the security forces have eliminated 16 terrorists in the last one month. As this piece goes to print there is a counter terrorist operation underway in Pampore, Kashmir in which one Para commando officer of the Indian army, two soldiers of the Central Reserve Police Force (CRPF) and one  civilian have lost their lives.

It is quite evident from the above that the security situation in Jammu and Kashmir is not conducive for revocation of AFSPA. After meeting with Mehbooba Mufti, Ram Madhav has gone on record to deny a media report which said that BJP has agreed to revoke AFSPA from some areas of Kashmir on trial basis.

If Mehbooba wishes to take forward the legacy of her father and political mentor she will have to stop acting like and opposition in her own government. Mehbooba simply has to muster the courage to catch the bull by the horns. Once the ball gets rolling everything will automatically fall in place.