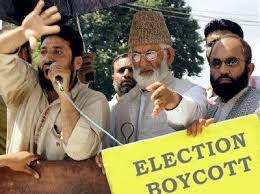 Polling has finally come to an end in Jammu and Kashmir with the Baramulla and the Ladakh constituencies casting their votes on May, 7. Many people other than the candidates would have heaved a sigh of relief, especially the security forces on whose shoulders lay the onerous responsibility of conducting an incident free election. During the course of the elections, there have been a few incident leading to the unfortunate death and injury to some people but overall the impact of terrorists was not of the type that their masters across had desired and prepared for.

For Jammu and Kashmir the Lok Sabha polls are a rehearsal for the forthcoming Assembly election scheduled for the later part of the year. It is time for the political parties and the administration to carry out an assessment of the situation and take corrective action to ensure a better show in the next polls.

Security is critical during polling in Jammu and Kashmir. This is due to the determination with which foreign forces and their “assets within the State” work towards scuttling the process. A twin strategy of political disruption and terrorist violence is invariably put in place for this purpose as was seen during the Lok Sabha polls. The plan was to register the presence of terrorists and intimidate the people. The level was gradually increased as the dates of polling drew near.

In Kashmir, the violence threshold was increased many months before the polls were to commence. In fact the preceding winter months witnessed an unprecedented increase in infiltration attempts on the line of control and terrorist activity in the hinterland. More than forty terrorists have been killed in precision strikes by the security forces across the hinterland of the Kashmir valley since the beginning of this year. Such large numbers have not been witnessed for many years now.

The attempt by terrorists to up the ante was countered with an equally decisive and well coordinated response from the security forces that did not allow the desired degree of success to be achieved by the evil forces. It is, however, amply clear from the situation on ground that the Kashmir valley is yet not free from the shadow of terrorism; it may have decreased but it is nowhere near total elimination.

Infiltration activity in Jammu and Kashmir follows a pattern wherein the onset of summers witnesses a shift in the infiltration pattern from South of the Pir Panjal mountain range to the Kashmir valley. This is because the tactical advantage of the Poonch-Rajouri region goes down in the summers with reduction in fog and foliage; in the Kashmir valley the advantage increases with melting of snow, opening of the passes and some gaps in the line of control fencing due to damage during the winter months. In any case, terrorists prefer to infiltrate from the Kashmir valley itself because it saves them the bother of crossing the Pir Panjal which is also fraught with danger because of army domination of the higher reaches of the mountain range.

Thus, infiltration activity in the Kashmir valley has seen a perceptible increase since the last few months. The presence of terrorists in launching pads across the line of control has been registered and many attempts have been foiled especially so in the Kupwara sector. This is partly due to the traditional pattern and more due to the urgent need to fill up the depleted cadre well before the assembly elections when they have an important role to play.

On the political front it is quite evident that in a few urban areas of the Kashmir valley leaders have not been able to generate confidence among the people to come out and vote despite the platform of near stability that has been provided to them by the security forces. People are not averse to voting but do not do so due to fear of being recognised and targeted after the elections as also fear of violence during the elections. This is the result of a highly effective psychological campaign that divisive forces have put in place. Now that the problem is known the mainstream leadership needs to put aside all inter-party issues to address this evil agenda. The objective should be to infuse confidence among voters of areas that have traditionally witnessed a low turnout. Personal interaction; social and political discourse on the problems of the people and resolving them with all honesty; development; psychological conditioning and anything else that needs to be done should be done to break the impasse that has been there for too long.

Inimical forces will step up the tempo for disruption of the Assembly polls straight away. Periods of turmoil as witnessed in the summers from 2008 to 2010 cannot be discounted. Infiltration bids are already on the rise as are ceasefire violations along the line of control. A concerted drive for local recruitment of terrorists will be made, money will be invested freely to attract candidates; drugs will be provided in ample quantity. Movement of manpower and war like material from the Nepal border is likely to be resorted to. Fidayeen attacks on security forces, killing of innocent civilians followed by threats and intimidation can be expected; political leadership especially at the grassroots will be specifically a targeted. Attempt will be made to malign security forces by involving them in engineered human rights violations. Many other innovation and devious means will be applied to create a situation of chaos and anarchy.

There is a need to prepare for a concerted onslaught on Indian ideals of democracy and freedom in the coming months. The existing model to counter the evil designs has paid handsome dividends; all that is required is its refinement supplemented by enhanced synergy between the administration, the security forces and the people. No power can stand against such a collective will.