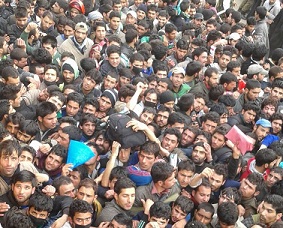 Mufti should not miss the woods for the trees

While the national media, especially the electronic segment, was going overboard in squeezing as much of sensationalism as possible from release of a Kashmiri separatist, Masarat Alam,  from prison, a separate event of far greater significance went relatively uncovered.

On March, 11, a few days after the release of Masarat Alam, the Indian army advertised for 55 vacancies in the Jammu and Kashmir Light Infantry Territorial Army (Home and Hearth) [TA (H&H)]. The selection was for candidates from Ganderbal, Budgam, Pulwama and Srinagar only. In an unprecedented development about 20,000 youth from across the Kashmir valley came for the selection.

While commenting on this phenomenon, General officer Commanding of the Chinar Corps,  Lt General Saha said, “Last year, from July to December, 767 Kashmiri youth enrolled in the Army. We understand that Kashmiri youth are coming for recruitment in large numbers.”

Overwhelmed by the response over the years, the Army has increased the intake in service from Kashmir and has also increased the number of rallies being held.  To meet the burgeoning demand the Indian army has raised about seven TA (H&H) battalions comprising exclusively of youth from the state. These battalions comprise of troops enrolled from the area where they operate. Minimum education level is eight standard and age limit is 25 years and below.  Ex-servicemen, Ex-STF/SPO and surrendered militants are also enrolled in these battalions.  Recruitment for TA (H&H) has been done from terrorist infested regions also.  This provides a wide range for a large cross-section of people to avail the opportunity.

The basic task of the units is to assist security forces in the conduct of counter- terrorist operations.  The brave soldiers of TA units help eliminate terrorism from their own area.  This apart, they provide valuable inputs on the civic amenities that the region requires for its development.  They not only recommend projects for the welfare initiatives of the Indian Army under its flagship project, Operation Sadbhavna, but also work whole heartedly towards their implementation.

The response, as seen by the recent rally, is an indicator of the desire of the Kashmir youth to opt for peace and progress. Those who came for recruitment included many graduates and even post graduates. Those who opt for joining the service are aware that their families may be targeted by the terrorists; yet, they are prepared to risk their lives to earn their livelihood and in the bargain also serve the country.

The output of TA (H&H) units has been much beyond the expectations of the Army.  The loyalty and dedication of the TA soldier is fast becoming a role model for the youth of the region.

The Army is sensitive to the aspiration of the youth to join its rank for which reason it has started recruitment training in many places across the Kashmir valley and other parts of the state. Training is being given not for recruitment in the ranks but also for selection in the officer cadre. Detailed information about education qualification, physical standards and procedure, medical check up, location of recruiting offices in the state and their duties, facilities and welfare measures provided in the Army after enrolment are explained in these training capsules.

Preparation assistance provided to the prospective candidates includes provision of schedule for the exams/employment, assistance in procuring the form from the relevant place/institute, guidance in filling up the forms and ensuring their timely dispatch. After the forms have been dispatched, the intervening period is utilised for regular coaching and preparation for the exams. As part of the preparatory effort, the members are made to undergo mock tests so as to assess their readiness.  Such training sessions are also oversubscribed and have led to a lot of successful recruitment.

The huge response to an army recruitment rally in the same week when Masarat Alam was released from jail is an indicator of the actual priority of the people of the Kashmir valley. Why could Masarat Alam not stop the youth from coming out for recruitment in such large numbers? Is it not evident that the youth are no longer inclined towards his disruptive, regressive and separatist agenda and are more interested in joining the national mainstream with honourable jobs and livelihood?

Masarat Alam and his ilk are now insignificant and their being in or out of jail a non-event. The focus of the people is only on peace, progress and development for which they voted in large numbers. It is now up to the leadership to understand which side the wind is blowing.

It is also quite evident that the Indian army is well liked and respected in the valley, otherwise its call for recruitment would not elicit such a huge response.

Chief Minister Mufti Mohammad Sayeed should read the writing on the wall and adjust his priorities with the aspirations of the people who have elected him at the earliest. His inability to do so may well lead to his political marginalisation. His actions in the last few weeks are indicative of being off track at the moment – he is missing the woods for the trees. Only a timely course correction can save his political career.