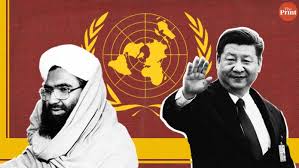 China is finding itself increasingly isolated due to its blind support to Pakistan in repeatedly thwarting the United Nations efforts to declare Jaish-e-Mohammad (JeM) chief, Masood Azhar, a global terrorist. The United States’ decision to discuss the issue of Azhar in the open UN General Assembly has put China in a very embarrassing situation. Frustrated by China’s stubbornness in not lifting the technical hold on the UN listing of Azhar as a global terrorist, the three key members of the P-5 Club in the UNSC have sought an explanation from Beijing. There is no doubt that major countries have been exasperated with China for torpedoing the repeated efforts of the United Nations to ban Azhar.

China seems to be running out of its options  and is clearly rankled by the US decision to take the issue directly to the UN General Assembly. Sensing that it can no longer protect the JEM chief, China made its all-weather ally Pakistan give a placatory statement, thus exposing the nexus between the two countries. Last week, Pakistan suggested that China could withdraw its technical hold on Azhar if India agreed to military de-escalation along the border and resumed the stalled bilateral talks. It is clearly indicative of the realisation on the part of both China and Pakistan that the issue could not be procrastinated further. China has reportedly been rebuked by the US making the issue of Indo-Pak military de-escalation and resumption of talks as pre-condition for lifting its technical hold in the Azhar issue.

With the US refusing to play ball in linking the two issues and major members of the UN Security Council hardening their position, time is running out for Beijing. China is now working to wriggle itself out of the situation. China’s foreign ministry spokesperson Geng Shuang said in a regular media briefing: “After the application for designation of Azhar was proposed (in the 1267 Sanctions Committee), China is in close communication and coordination with various parties and has made positive progress. The US knows that very well.”

“We hope various parties will meet each other half way and continue to properly solve this issue under the 1267 Committee framework. Last Friday, UN Security Council members exchanged views on the US-proposed draft resolution. The majority believes that efforts should be made to solve the issue under the 1267 Committee framework,” the spokesperson added.

Not mentioning US by name, the foreign ministry spokesman went on to add: “We believe under the current circumstances, forcing a draft resolution at the Security Council is not a constructive move and sets a bad example… It is also not conducive for peace and stability in South Asia. China is opposed to this.”

There are three important elements to the statement. One, China has made its displeasure known at US attempts to corner it by referring the issue to the wider Security Council. Once the issue is deliberated in the Security Council, China will find itself isolated in the important forum as all the 15 countries (10 non-permanent members and five members) excluding Beijing are in favour of Azhar being declared a global terrorist in the aftermath of the terrorist attack in Pulwama, Kashmir, on a convoy of Indian security personnel that led to more than forty fatal casualties. It is, however, quite apparent that China is feeling the heat and it is a matter of time before it falls in line, but, it will make every effort to prolong the process knowing well that India’s ruling party could use it as a major victory ahead of the national elections.

This is the fourth time that China has blocked a combined bid by the United States, France and the United Kingdom to declare Azhar a global terrorist by putting the proposal on a “technical hold” before eventually terminating it on the grounds that “there is no consensus” in the 1267 Committee of the UN Security Council.  How can there be a consensus if one country (read China) continues with its unprincipled stand on Azhar? In 2017 also, it was the odd nation out in the 15-member Security Council when the P3 nations – the US, UK and France – sought to place Azhar on the 1267 sanctions list that would have entailed a travel ban on him and freezing of his assets. While the proposal had approval of all the other 14 members of the Security Council, it was China which censored it. Needless to say, China is misusing its veto power.

The second important point which exposes China’s double standards in the war against terrorism is its argument that listing Azhar as a global terrorist is not conducive for peace and stability in South Asia. One fails to understand this weird and illogical explanation.

It is notable here that the JeM was blacklisted by the UN Security Council in 2001, a year after its formation, following a deadly attack on Indian parliament in December 2001, which had brought India and Pakistan on the verge of a fourth war. Strangely, China considers JeM an outlawed organisation, but not its leader?

What is China’s compulsion in protecting Azhar, who is, no doubt, a prized asset for Pakistan? Well, if the United Nations declares Azhar a global terrorist, then Pakistan will be compelled to arrest him and seize his assets.  This is something the Imran Khan government can’t afford to do since it has fear of unprecedented violence by an army of militants who work for Azhar. The resultant disruption will adversely impact the China Pakistan Economic Corridor (CPEC). China also does not want to give an issue on a platter to Prime Minister Narendra Modi when India is in midst of parliamentary elections. The designation of Masood as a global terrorist and his subsequent arrest will no doubt be a big boost for Modi’s campaign  to return to power.

Any further attempts by China to stall the move will be seen as its weakening resolve to fight the global war against terrorism. It now needs to take a stand on which side of terror it stands. The world is watching it closely.