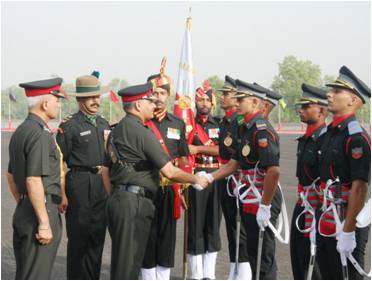 The dawn of June, 09, 2012 ushered a glorious day in the history of the Indian Army, when the gentleman cadets of Officers Training Academy (OTA), Gaya, mesmerised a large gathering of military, police and civil dignitaries and family members of the trainees, with their smart and graceful drill movements in an impressive passing out parade. This was the first such passing out parade held at the newly raised academy.

OTA, Gaya was raised in July, 2011 with the motto of ‘Shaurya, Gyan, Sankalp’ (Courage, Wisdom, Resolve) primarily to plug the officers shortage in the Army. Presently, the academy conducts training for the Technical Entry Scheme (TES) and Special Commission Officers (SCO) entry. The TES cadets join the academy after completing high school (10+2) while the SCO cadets are selected from the ranks of the soldiers. All of them undergo one year of basic military training at OTA Gaya. Thereafter, the TES course proceeds to various military technical institutions for engineering studies before joining the officer cadre and the SCO course gets commissioned as officers,.

The parade was reviewed by Lieutenant General SK Singh, Vice Chief of Army Staff. The reviewing officer arrived at the venue in a majestic ‘Buggie’ drawn by two Austrian horses and escorted by smartly dressed out-riders. After an impressive ceremonial parade, he gave away various awards to the gentleman cadets who had excelled in training.

The chief guest, in his address, congratulated the gentleman cadets for an excellent standard of turnout and drill. He spoke of the glorious history of the Indian Army and exhorted the newly commissioned officers to follow its great traditions and strive harder to achieve higher goals. He stressed on the challenges of modern warfare, including asymmetrical threats and exhorted the need to keep pace with the technological advancements. While congratulating the parents, the reviewing officer said that they were among a few lucky parents whose sons have got the opportunity to serve in the Army as it is best and most noble of professions.

The parade culminated with the passing out gentlemen cadets stepping on the shimmering stone of the ‘Antim Pag’ or the ‘Final Step’. The badges of officers’ rank were then placed on the shoulders of the newly commissioned officers by their proud parents and close relatives who were visibly overwhelmed with emotional feelings.