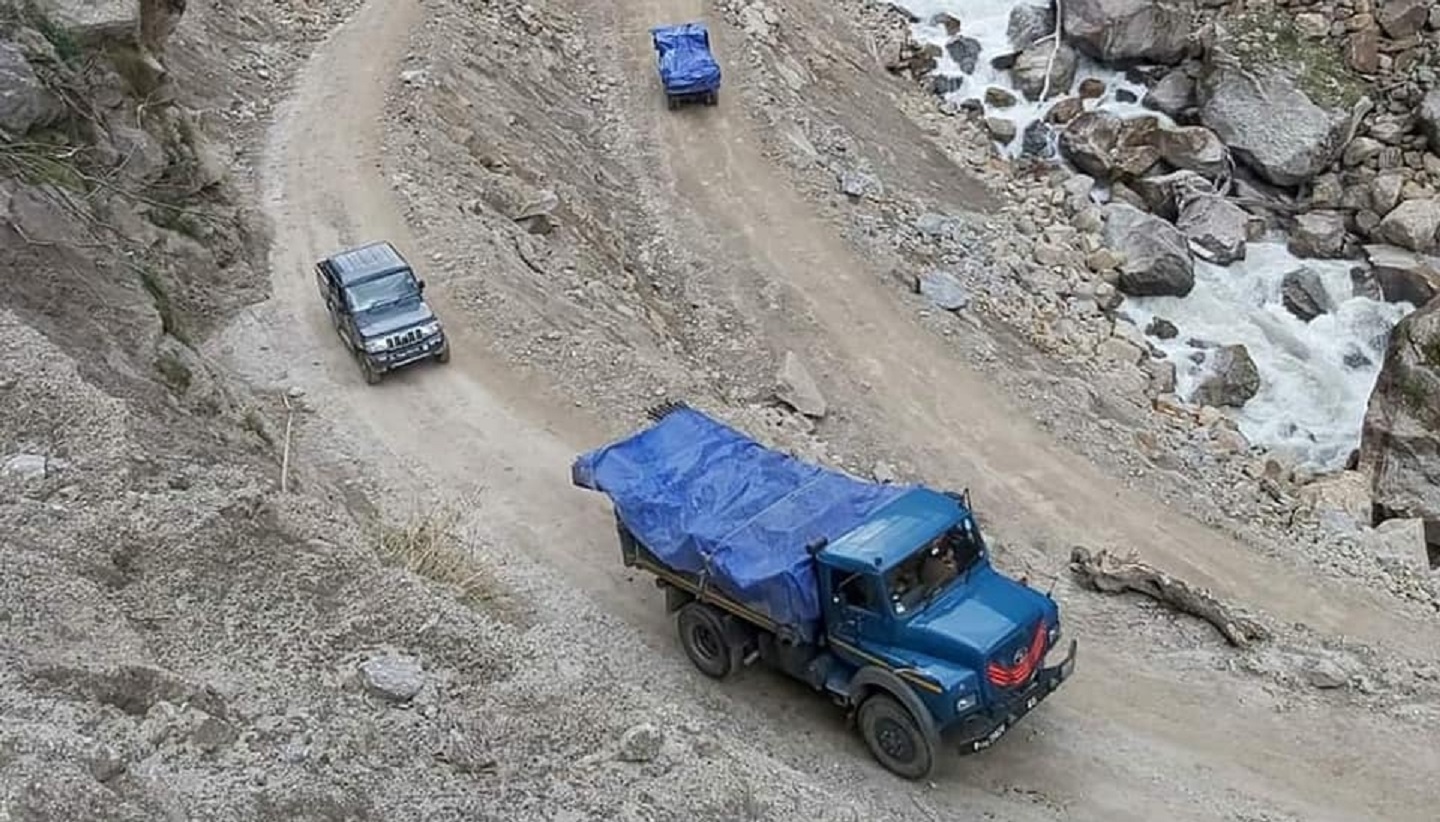 On 8, June, 2020 , Rajnath Singh, Union Minister for Defence, dedicated to the Nation, a road from Dharchula to Lipulekh Pass in the Indian state of Uttrakhand. the road was an approach to China, India, and Nepal on the western Tri-junction between the three countries. It was built by the Border  Roads Organisation.

The dedication was a low key affair, mainly due to the restrictions posed by the COVID-19 Pandemic. The Indian media did not pay much attention to the event until the next day, when suddenly, Nepalese Prime Minister Khadga Prashad Sharma Oli accused India of violating the territorial integrity of  the Federal Democratic Republic of Nepal. Notably, Oli belongs to National Communist Party of Nepal and he, it seems, was waiting for an opportunity to confront India and especially so on the boundary issue.

Since the last 73 years, Mahakali river had been  treated  as  International border between India and Nepal in the western region and Limpyadhura, Lipulekh Pass, Kalapani  Village and Head-works as a part of India. The same was earlier confirmed by the Treaty of Sauguli  in 1816 between then King Yuddha Bikram Shah of Nepal and the British East India Company. Overnight, Nepal drew out a new map which included Lipulekh Pass and Limpyadhura as a part of Nepal thus laying claim on an additional 400 sq km of strategic real estate.

Chief of Army Staff of Indian Army, General MM Naravane, made a statement to the effect that the entire area as claimed by Nepal is very much a part of India. He also hinted that China was likely to be behind this instigation.

The Nepalese prime minister immediately initiated a constitutional amendment  and passed the new map of Nepal  in both houses of parliament of his country. He got full support of the Nepalese opposition parties to include Nepal Congress and Nepal Jan Samajbadi Party. Nepal also responded with deployment of additional Police forces in the region.

India offered a diplomatic solution to this bilateral issue but Nepal replied that we will wait till the COVID  crisis is controlled. On 18, June, 20,  Nepalese Army Chief, General Purna Chandra Thapa visited the Border Out Post (BOP) of Dharchula  along with an Inspector General of Nepal Armed Police force.  He announced that six more BOPS will be made at Dumling, Dharchula, Lekham, Lali   Malikarjun and Lauljibi. Meanwhile, Shastra Seema Bal  has reported that 30 to 40 border pillars put by India in Lakhimpur Kheri in  Uttar Pradesh along Kanchanpur border have been found to be missing. On 12, Jun, 20, Nepal Armed Police opened fire on Indian farmers at on Sithamarhi in Biha. One farmer is reported dead and two injured. India has lodged protest to Kathmandu.

As  per Vedic literature, a sage called “Ne” was declared protector (PAL) of  land in Himalayas by Pashupati Nath ( Lord Shiva) and hence the entire region was  named Nepal. Mithila the Kingdom of Raja Janak, the father of Sita had its capital in Janakpur, Nepal. Kirats from Nepal participated in Mahabharta from Pandav side.

After the decline of Moghuls in 1798, Nepal emerged as a unified strong Gurkha kingdom under Yuddha Bikram Shah  and occupied the Kumaon and Garhwal area. The Kingdom extended from River Sutlej in the west to River Teesta in the East and Terai region of modern day Uttar Pradesh in south.

This occupation of territory led to the Anglo-Nepal War in 1814/15. The treaty of peace was signed at Sauguli, a town located in Champaran, Bihar in 1816  whereby all occupied territory  was returned. Meechi River in East and Mahakali  Nadi in west was declared as the International Border between India and Nepal.

From 1846 to 1953, 15 feudal Kingdoms were integrated in to single united kingdom of Nepal and ruled the Shah dynasty. A member of the Rana family was nominated as  prime minister. The last Rana prime minister resigned in 1951.

The Maoist communist ideology supported by China  started spreading  its wings. Due to prolonged pro-democracy demonstrations, on 16 Apr1990,the King dismissed the Government  and proclaimed abolition of Panchyat Raj system. A new multiparty democracy was established within framework of constitutional monarchy.  On 1, June, 2001, nine  members of the royal family including King Birendra Shah and Queen Aishwarya were killed. Gyanendra, younger brother of King Birendra  became King. Calls for democracy gained momentum after this incident

In 2006,  the Maoist group that was earlier underground joined the Government.  In 2017 elections, National Communist Party( NCP)  formed by merger of  CPN ( Marxist) and CPN (Maoist) become the ruling party under Khadga Prashad Sharma Oli . Obviously, it has a strong  leaning towards China. Prime Minister Oli, who was in doldrums due to internal crisis, got a fresh lease life by highlighting the Lipulekh issue and projecting himself as a nationalist

Nepal have to keep in mind that it is totally landlocked and a buffer state between the two Asian giants, India and China. While China is only to the North of Nepal, India joins to East, West and South. Strength of Nepalese Army is approx one lakh; it is  basically infantry centric. Most of the weapons come from India as does the fleet of helicopters.

India and Nepal signed a Trade and Transit Treaty in 1950 that gives  free access to port of Kolkata to Nepal for export and import of goods and services. India also has an open border with Nepal. Similarly, China and Nepal also  signed a Trade and Transit Treaty in 1960, whereby,  Nepali  citizens can go 30 kms inside Tibet without passport. India temporarily suspended the treaty in 2015 resulting in a breakdown of economy in Nepal due to blockade. This was not liked by the Nepalese Government.

A common religion, Hinduism, along with similar customs and culture, binds the two countries. India has also given to its neighbour a special status as explained above. Nepalese citizens find employment in the Indian Army Gorkha Regiments and Assam Rifles in large numbers. Indian pilgrimage to Kailash Mansarovar and Pashupati Nath Temples goes through Nepal.

Nepal feels lndia has an inhibiting big brother attitude, it does not desist from political interference in internal matters and arm twisting and gives only 10 percent direct investment. Nepal also feels that India is preventing the country from building a relation with China and yet not carrying out any infrastructure development. India is worried about the leaning of the present Government towards China, especially the permission given by Nepal for the One Border One Road (OBOR) project.

Kailash Mansarovar  Yatra is a long cherished dream for every Indian. This can be carried out by three routes viz from Nepal, Nathu La in Sikkim and the Lipulekh Pass in Uttarakhand. Of these the Lipulekh Pass is the shortest route from where the pilgrimage can culminate in eight days. This route has been greatly improved with road construction from Pithoragarh to Tawaghat and onto Lipulekh through Gaibgadh. What was earlier done on foot causing great discomfort over many days is now proposed to be motorable.  Once completed it will provide comfort to pilgrims and also give fast mobility to Indian Army in that area.   Nepal’s claims can, at best, delay the process but not derail it, hence, nothing is to be achieved from the theatrics.

India is facing a challenging situation; it is clear that Nepal is working on instigation of China and the timing is set to coincide with Indian preoccupation in eastern Ladakh. There are. however, multiple options available with India. In view of the close relation with Nepal India will go for the diplomatic option of talks. If the military option becomes inevitable India will be able to retain control of the territory with deployment of a Battalion plus of infantry.

(Author is a military veteran)