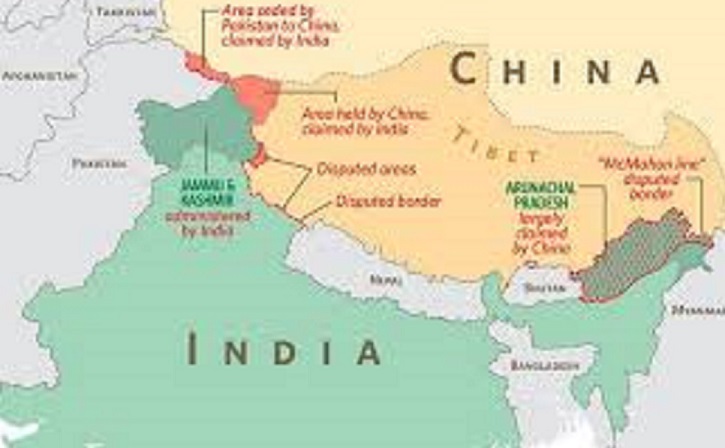 India has a 3488 kms long frontier with China along Xinjiang, Uygur, Zizhiqu and Tibet. Of this, 1597 kms is in Ladakh, 200 kms in Himachal Pradesh, 345 kms in Uttrakhand, 220 kms in Sikkim and 1126 kms in Arunachal Pradesh. Interestingly, Xinjiang and Tibet regions are under forcible occupation of China and should actually be called China Occupied East Turkestan (COET) and China Occupied Tibet (COT) respectively. The second interesting point is that the Chinese Communist Party (CCP) was not even born when the boundaries were firmed-in by the British and the existing governments of these regions on the principle of watershed and crest, from Karakoram pass in Ladakh to Kibitu in East ArunachaI Pradesh.

In Ladakh, the border was well defined by the Dogra Dynasty rulers and was accepted by independent India on 26 October, 1947, when Maharaja Hari Singh of Jammu and Kashmir signed the Instrument of Accession to join the Indian Union. The boundary coincided with the “Johnson-Ardagh Line” of British India that had been accepted by the princely state of Jammu and Kashmir and Tibet.

British India wanted a clear demarcation line on Tibet/Xinjiang and Ladakh frontiers as a precaution against expansionist Russia. In 1865, Sir W.H. Johnson, then Surveyor General of India was given the responsibility to carry out the survey in Ladakh. He endorsed that the border of Khotan, an ancient Kingdom now a part of Xinjiang, was till the Kun Lun mountain range and the Karakash valley was within Jammu and Kashmir. The boundary of Jammu and Kashmir stretched from Sanju Pass in the west to Eastern most edge of Chang Chenmo Valley along Kun Lun mountain range.

The proposal was finally approved by Major General John Ardagh, Chief of Military Intelligence at London in 1897. The legal boundary between India and East Turkmenistan was thus based all along the Kun Lun Range and was called the “Johnson- Ardagh Line.”

In 1893, Hung Ta Chen, a top Chinese official, provided to the Russians a map marked with frontiers coinciding with the Johnson-Ardagh Line. An Atlas published by the Government of China in 1933 showed the Johnson-Ardagh Line as a border between Xinjiang and India.  Peking University Atlas also confirmed Aksai Chin as part of India. It was thus accepted by all parties as a frontier.

The Government of India, post independence, fixed the official boundary in the state of Jammu and Kashmir along the Kun Lun mountain range as defined by Johnson- Ardagh Line.

The Chinese, in 1896, on instigation by the Russians, submitted a map to Mr George McCartney, the British Counsel in Kashgar, that proposed another boundary line in this region. The proposal was developed by Sir Claude Mcdonald, British Envoy in China and approved by Lord Elgin, Governor General of India in 1899. The boundary line was shifted due South-West of Johnson Line along Lakstang Mountain Range. It placed Lingzi Plains in India but  Aksai Chin which was North of Lakstang range was shown as part of Tibet. This line was not ratified by any government, but, CCP, in 1959, proposed to India to consider McCartney Line as the new frontier. CCP was ready to drop its claim on NEFA in return; the then Congress party led  Government in India did not agree.

A treaty had been signed between Russia and Britain in 1907, accepting Chinese Suzerainty on Tibet. Tibetan rulers were not happy and refused to endorse the treaty but under pressure and military coercion by the British, the terms were accepted.

A tripartite conference was held at Shimla (Himachal Pradesh) on 27 April 1914. The British representative was Sir Henry McMahon, Tibet was represented by Lanchen Shatara and nationalist China by Ivan Chen. The finalised map and proceeding  (called the McMahon Line) were signed by Tibet and India on 3 July 1914. This was done in the absence of a Chinese representative and was later objected by China. Tibet had also wanted Tawang to be its part. In 1937, the Shimla Convention was approved by British India and Survey of India published maps showing McMahon Line as the legal International border between Tibet and India.

After the collapse of the Qing dynasty, Tibet declared itself as an independent nation in 1915 under the 13th Dalai Lama, Thubten Gyasto.

Tawang was occupied in April 1938 by a special force led by Captain G S Lightfoot. When the force left, the Tibetans again moved into Tawang and occupied it till 1951. Post independence, the North-Eastern region was called the North East Frontier Tract (NEFT).  A column of 2 Assam Rifles led by Major Bob Khathing (A Tangkhul Naga) liberated Tawang on 20 April 1951 and unfurled the Tricolour at Bum la. Thus, McMahon Line became the legal frontier and the region was renamed North East Frontier Agency (NEFA). Later, in 1972, it became the Union Territory of Arunachal Pradesh and a full-fledged State of the Indian Union on 20 February 1987.

The situation changed when the communists came to power in China in October, 1949. At that time, India, under Pandit Jawaharlal Nehru, was aspiring leadership of the Non-Aligned Movement and following a foreign policy of “Peace and Tranquillity” with its neighbours.  India was one of the first countries to recognise Communist China in 1949.  Nehru further sponsored China to the United Nations and helped the country get a permanent seat in the Security Council. The Indian Government signed the Panchsheel Agreement with China. It was based on five principles of peaceful coexistence. Accordingly, there was very thin military deployment on the northern frontier by India.

Independent India, post 1947, was absolutely clear that the International Border remained distinctly marked in East as McMahon Line; in Sikkim , Uttrakhand  and Himachal Pradesh as the present line and in Ladakh as the Johnson-Ardagh  Line.

Nehru was shocked when, in August 1950, Chinese troops annexed Tibet and made it a part of China.  The 14th Dalai Lama, Tenzin Gyatso, signed a 17 point treaty with China in 1951. The Indian Government recognised Tibet as part of the People Republic of China. In 1956-57, there was an uprising in Tibet by CIA trained guerrillas who ambushed PLA convoys. The Chinese inducted several divisions and suppressed the rebellion. The Dalai Lama escaped in 1959 with his followers to Tawang and settled permanently in India.

China then contended that Tibet had never been a sovereign nation and had no power to execute the treaty with India which created the McMahon Line. It claimed the whole of NEFA as South Tibet.  In the northern frontier too, Chinese forces clandestinely occupied Aksai chin in 1956  and made a 185 km long Highway G-219  joining  Xinjiang  and Tibet. A delayed action by a sleeping India was the adoption of the “Forward Policy” which resulted in the Sino-India War of 1962.

China launched a surprise attack across the McMahon Line and reached till Rupa Post on the foothills of the Himalayas overlooking the River Brahmaputra. This was the point of the Chinese claim and was almost 200 kms into Indian Territory from Bum la, overrunning garrisons of Tawang, Se La and Bomdi la.

Post the 1962 debacle, the Chinese did retreat but continued to occupy almost 38000 sq kms of Indian territory that they wanted.  Zhau  Enlai, in a  polite letter to Nehru christened  the new boundary as Line  of  Actual  Control (LAC)  a loose ad hoc frontier based on the Actual Ground Position Line.

Line of Actual Control (Line of No Control)

The LAC runs from Karakoram Pass in the North West to Chumar camp  across River Indus on a frontage of approximately 450 kms. There are a few important features and river junctions on the LAC. Firstly, Daulat Beg Oldi (DBO), an old camp site and village just below the Karakoram Pass that has a functional Air strip and is now linked with an all weather Class 40 , 255 km long road (DSDBO Road) from Darbuk Cantonment.  Secondly, Chip Chap River Valley, that originates from the Karakoram range. Thirdly, Despang Plains where the LAC  runs along  a 25 km long open area. Fourthly, the Galwan River that is about 80 km long  and originates from Samzunglin in Kun Lun mountains  and joins the Shyok River.  Fifthly, Chang Chenmo Valley in the south that touches Gogra camp and goes further 3 kms to the east at Hot Springs  police memorial point; Hot Springs is a hot Sulphur  spring with temperature of 107  Degree Fahrenheit even under sub-zero conditions . Another 6 kms to the East is Kongka La held by India. Sixthly, Pangong Lake where LAC crosses near Finger 8 and approaches Rezang La, East of Chusul.  Seventhly, Village Demchok, in Nyoma Tehsil, an old British Military camp site on the Indus River, also called Demochang.  Lastly, Chumar Camp, a Border outpost and meeting point located on an elevation of 16700 feet overlooking Himachal Pradesh.

Thus, was created a new border which was not well defined, marked or based on a watershed and  continues to create confusion. Despite all agreements, the Chinese keep declaring a new claim line to irritate India. They carry out illegal activities in buffer zones in the form of temporary intrusions. It has happened several times after the 1962 war. The Chinese were given a bloody nose in Nathu La and Cho La at Sikkim in 1967. Indian forces further checkmated them at Sumdorong Chu Valley, Twang in 1986/1987. They were stopped at DBO in 2000 and Shubansiri sector in Arunachal Pradesh in 2003; again at DBO in 2013.

In the present context they attempted an intrusion at Naku La on 6 May 2020, and again at Patrolling Point 14 in Galwan Valley on 15 June where they were forced back in a major clash with Indian forces.

India has been trying to defend the points on LAC as marked on a handmade map. sadly, the situation is such due to Chinese irascibility that the Line of actual Control has become a Line of No Control. What is definite here is that  the Indian nation and particularly the Indian Army will not allow China to get away with its expansionist designs. The necessary national resolve and military power to ensure this is available with India.  The sooner China realises this the better.