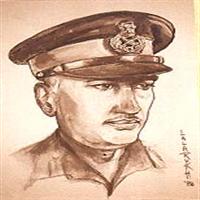 Indian folk lore has it that when celestial planets cross the firmament, they bring in their wake inexorable changes in the destiny of Nations and the lives of men.  So too, can it be said that exceptional leaders and commanders influence the destiny of an Army and the men that comprise it.  The late Lieutenant General Khem Karan Singh, MVC , affectionately known to all simply as K K, was just one such “Man of Destiny”.  He concluded his march to a soldiers Valhalla on 26 July 2016.

It was his unmatched strategic brilliance and planning as the Director of Military Operations of the Indian Army, that in 1971, under the redoubtable leadership of the late Field Marshal S H F J Manekshaw, Padma Vibhushan, Padma Bhushan, MC the then Chief of the Army Staff, saw the emergence of Bangladesh as an independent Nation and secured for the Indian Army a memorable military success against Pakistan.  The destiny of the Indian sub-continent now assumed a new dimension forever hereafter.

K K was born on 3 March 1919 in Bhadani, Rhotak District in the then Province of the Punjab.  A bright student, he completed his education by graduating in 1940 from the prestigious St Stephens College in Delhi.  Continuing his Family tryst with the Indian Cavalry in which       K K’s Grandfather had served with distinction in 14th Murray’s Jat Lancers, K K too was commissioned into a distinguished Indian Cavalry Regiment, 16th Light Cavalry in 1941.  He saw action at the Battle of Meiktila and on the Arakan Front.  After the War, K K commanded his Regiment 16th Light Cavalry in 1952-54. Thereafter, after holding prized instructional, Staff and Command assignments, K K assured his place in the pantheon of ‘ Great Military Leaders ‘ by inflicting considerable attrition on the Pakistan 6 Armoured Division in the Sialkot Sector in 1965 whilst commanding the Indian 1 Armoured Brigade in the Sialkot Sector, for which he was awarded a well deserved gallantry award of the Maha Vir Chakra.  Promoted to the rank of Major General in 1966, in 1970 he proceeded to assume the highly coveted post of Director Military Operations (DMO) at Army Headquarters where, by 1971, now promoted to the rank of Lieutenant General he headed the prestigious Strike Corps ( 1 Corps) after his earlier brilliant strategic tour-de-force in planning the 1971 operations, thereby contributing greatly militarily to the final outcome of the creation of Bangladesh.  This meritorious service to the Nation saw K K being conferred the National Award of the Padma Bhushan by the President of India.  In 1973,   K K was appointed Army Commander Central Command at Lucknow from where he retired from Service in 1975 after a brilliant and distinguished military career spanning some three and a half decades, having participated in the Burma Campaign (1941) and all three, 1962 Sino-India, 1965 and 1971 Indo-Pakistan Conflicts with singular distinction.  Lieutenant General K K Singh’s military graph is a truly enviable and not easily emulated career profile by any stretch of imagination.

The late Lieutenant General K K Singh, MVC had a charismatic presence.  He had only to walk into a Regimental or Headquarter’s Office to give personnel the feeling that they were his men.  It was a personal bonding.  Instinctively, they became conscious of the authority that he appeared effortlessly to radiate.  They needed his leadership.  Perhaps, also they were obscurely aware that this austere, dignified, somewhat aloof commanding figure needed them too.  Because their loyalty was important to him, he in turn, gave of his loyalty freely and generously to those who served under him.   His austere mien and dignified distance were his personal defence against favour seekers and others of that ilk since his true nature was actually cast in utter gentleness, with a heart of pure gold and the absolute inability to say “No”.  This dichotomy was pierced only by those of his acolytes who approached him fearlessly because they had successfully cleared his discerning esoteric standards and had been found to be worth his while.   To the majority, not aware of this aspect, such a possibility often proved to be too daunting an undertaking which they preferred not to venture.  The General had little time for frivolities and even less, for those he found professionally wanting.  A perfectionist, both in thought and deed, he shunned laggards, armchair critics and poseurs.  His one passion remained his encounters with his Golfing partners, especially when putting, which he approached with all the enthusiasm of a ‘military operation’.  Breaking into peals of laughter at a ‘muffed’ putt, he oft remarked that the pride of place as the greatest leveler of rank would easily go to the “ little round white rascal ” as he phrased it.  Little else, apart from his professional responsibilities and impressive library of books, stirred his curiosity or aroused his interest.  Perhaps, in his constant quest for excellence he had already long ago, made a personal compact with the old adage that “ To be great sometimes one has to be misunderstood ”.

Lieutenant General K K Singh may also have won honour in the eyes of other men, but not in the highest degree unless his concern was with his own honour, with his own determination to perform his proper function to his own best ability.  This is the central virtue and greatness of Hinduism as a Faith and of the Warrior as his credo.  It was in the selfless adherence to this immortal pledge that the late Lieutenant General K K Singh excelled beyond compare.  In his inimitable manner, with visionary foresight for the future benefit of the Indian Army, he shaped and moulded many of his acolytes in his Spartan military shape.  He foresaw when others could or would not see; he acted courageously when others were seized with immobility; he graciously recanted when others sought to justify; above all, he sought no self glory when others vainly embellished themselves, Thus did he mould and guide another generation of gentlemen Officers and soldiers in their martial calling.

Truly, the immortal words of Alfred Lord Tennyson in his Ode on the death of the Duke of Wellington can equally apply in full measure to Lieutenant General K K Singh, MVC on this sorrowful occasion –

“Great in Council and great in War”

We of the Armoured Corps salute you.  We thank you, we will always remember you and we shall forever deeply care.”