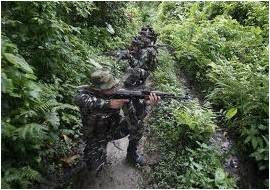 The crowds in Hisar just yesterday went on a rampage. They torched a couple of government buildings including a police post and the official car of a district judge. The civil administration accepted its helplessness in the face of such loot and arson and turned to the army for help. Such an occurrence, where the politicians and civil administration mishandles a situation to a point where it cannot be controlled and then calls for help from the army to restore normalcy, is not uncommon. In fact, the army is the last bastion of peace and order in our country. In moments of crises, whether instigated by foreign forces or internal turbulences, it has always been the army that has come to the rescue of the nation.

In the context of natural disasters, due to its employment in adverse physiographic conditions, the army very often has to bear the brunt of floods, landslides, earthquakes, etc. When Ladakh was reeling under the impact of floods originating from a sudden cloudburst more than a year ago, it was the army that suffered the maximum damage in terms of both loss of men and material. Yet there was not as much as a whimper from this sagacious force. Instead, the soldiers worked single-mindedly to ensure the safety of the civilian population, both the locals and the tourists. Earlier, when the earthquake had hit Kashmir on both sides of the line of control, the Kashmiri population had expressed trust only in the integrity of the army as an appropriate agency for relief, rehabilitation and aid disbursal.

Less than two weeks ago the Gurez sector of Kashmir witnessed a couple of devastating avalanches in the course of which more than twenty soldiers were buried under the snow and fourteen consequently lost their lives. This was not just an odd hazard to hit this particular area. The region of Gurez (which in Urdu means to stay away) is prone to landslides and avalanches. In fact the Snow and Avalanche Study Centre had issued a warning of an impending avalanche almost twenty four hours before the tragedy took place. The fact that these men lost their lives despite the warning just goes to show that they continued to man the sensitive post at great risk to their own lives. If they did not leave their post and relocate to safety it was because they realised that a laxity in the vigil that is maintained along the border could lead to infiltration of enemy troops into our territory.

That is not all. In the face of such heavy losses, the army continued with its rescue and relief operations both in Gurez and Sonmarg, which had also been hit by an avalanche and where another three soldiers had lost their lives. They located and rescued two persons from the Sonmarg Development Authority and seven villagers of Shitkari village who had been trapped under a bridge near Sonmarg. For reaching these people, a massive rescue mission was launched which involved Army helicopters as well as special troops who went out on foot despite the inclement weather conditions. The forces went to the extent of creating a make-shift helipad in order to be able to fly these people out of the place; once rescued they were provided with food and medical aid before being despatched to their homes.

The army in times of harsh weather conditions goes to a considerable extent to safeguard the lives and health of each and every citizen of the country. On February, 26, the Army saved the life of 75-year Samad Sheikh of village Thali along the LoC in Macchil, District Kupwara, who had suffered a heart attack. Sheikh was given emergency medical treatment by Army Doctors and then flown out to Srinagar in an Army Helicopter.All of this is not part of the Army’s mandated duties. These are acts of an extremely duty-conscious and motivated force which has always placed the security and integrity of the nation before self interest and security.

However, the issue at hand is not that of the performance of the Indian security forces. What needs to be questioned is our recognition of their services. Have the politicians, the civil administration, the media or even the people at large come forward to acknowledge their contribution? The answer is a sad and shameful “no”. No doubt, in the entire process of ensuring the safety of the civilian population a number of our soldiers must have put their life at great peril, yet, there are hardly any stories of such human courage and sacrifice in the face of awe inspiring odds that have been reported in the press. The army is too noble and duty bound an organisation to go looking for accolades of this nature but does that mean that we, the civilian population, who are the direct beneficiaries of these acts of valour have no responsibility towards our sentinels?

Why is it that most of us who are ready to bend backwards to please and appease the forces that are inimical to our welfare or those that have the power to harm us, shy away from acknowledging the service that is rendered to us by these soldiers who have nothing to gain and everything to lose when they put their lives in danger to save us? A nation that does not have the sense to honour its brave and valourous soldiers is doomed to a future filled with dishonour and ignominy. Pride in a nation stems from deeds of patriotism committed during various moments in the history of the nation. If we fail to even recognise the contribution of our soldiers