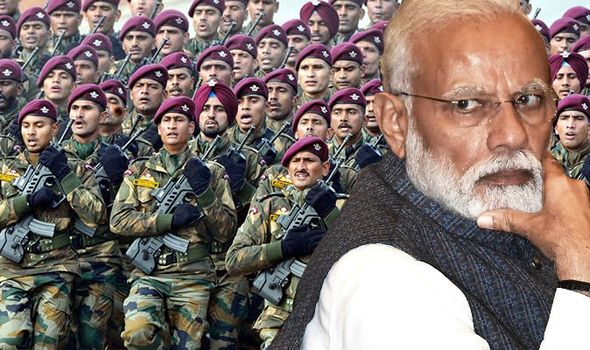 Zulfikar Ali Bhutto, then a member of the Ayub Khan’s military regime, proudly announced a thousand-year war against India while addressing the United Nations Security Council in 1965. Bhutto’s arrogance was soon dashed to ground in 1971 when India not only humbled its armed forces through a crushing and humiliating defeat but also dismembered it into two parts. The humiliation was too much for the Pakistan Army to bear. It was not only defeated but disorganised. The think tank in Pakistan including the courses at Staff College Quetta were unison in demanding a new strategy to deal with India because they were convinced that Pakistan could not match India in its military might and defeat the Indian Armed Forces in a conventional war. Numerous papers written by the think tank including the Staff College Quetta mentioned of gradually bleeding India. Bhutto, who deceitfully cheated Indira Gandhi at Shimla managed to secure the release of about one lakh prisoner of war and vacation of its occupied territories without conceding even an inch to India. India was the victor at the end of the war but lost strategically because India failed to demand vacation of POJK by Pakistan Army. Meanwhile, Bhutto was hanged after an internal military coup by his Chief of Army Staff Gen Zia ulHaq.

Zia gave practical shape to the murmurs of bleeding India by adopting “Bleed India through a Thousand Cuts” as the military doctrine to be followed by Pakistan military against India. As the readers are well aware the doctrine consisted of waging covert war against India at multiple points. Indian Army which had gained enough experience in counter insurgency operations in the NE was now getting embroiled in low intensity conflict (LIC) on its western borders. Punjab which had been simmering with a secessionist movement backed by Pakistan’s intelligence agencies was chosen as the test bed. However, the Pakistan backed Punjab militancy was crushed by the combined determination of the Punjabis and might of the Indian nation.

Scene thereafter shifted to Kashmir. Buoyed by the success of jihadi forces in defeating the Soviets in Afghanistan, Pakistan planned to use these jihadis in Kashmir to wage a religious militancy under the cover of supporting the Kashmiris in their struggle against India. Bhutto’s daughter Benazir Bhutto was back in the saddle and was keen to follow in the footsteps of her father. She provided all type of support to the militants including training of Kashmiri youth in specially built training camps in Afghanistan and POJK.  Pakistan officially maintained it as their moral support to “freedom struggle” in Kashmir. However, Pakistan’s evil intention couldn’t be hidden for long when then DG ISI Lt Gen Hameed Gul spilled the beans while addressing the Pakistan National Assembly and admitted that Pakistan was sponsoring the jihadis in Kashmir. Much later the self-exiled Pakistani dictator turned politicianParvez Musharraf admitted in an interview,”Kashmiris who came to Pakistan received hero reception here. We used to train them and support them. We considered them as Mujahideen who will fight with the Indian Army, various terrorist organisations like Lashkar-e-Taiba rose in this period. They were also our heroes.”He also called Hafiz Saeed and Lakhvi as “national heroes” and also confessed that with the support of groups like Lashkar e Taiba (LeT) the religious militancy was turned into terrorism. Even the present Pak Premier Imran Khan Niazi in an interview with a local TV channel has admitted, “It is because of Pakistani supported terrorism in Kashmir that India is forced to deploy more than 9 lakh Indian troops there.” In nutshell Pakistan has employed terrorism as a weapon and used terrorists not as “proxies” but to bleed India.

For three decades Pakistan created mayhem in Kashmir. The successes gained by Security Forces at different phases were frittered away by vested political leadership which viewed it as a counter force against India to continue their hegemony in Kashmir politics. In between the security dynamics in the subcontinent changed in 1998 when both the countries became nuclear. After the failure of Pak misadventure in Kargil, there was a spurt in terrorist activities with the terrorism spreading to Jammu region as well. The Indian Army successfully contained terrorism in Jammu region and by the end of first decade of the new century was successful in rolling the insurgency across PirPanjal and contain it in Kashmir only. After certain domestic happenings like the Amar Nath Land row, the situation took ugly turn with demand for secession growing louder and radical Islam gaining firm foot hold and alienation against India growing larger by the day. The so-called mainstream political parties whose Chief Ministers enjoyed unbridled power under the garb of Article 370 also began to support the anti-national forces, spoke in similar language and challenged the powers of the Government of India as well. Diplomatically, India launched an offensive against Pakistan to portray it as the fountainhead of terror and sponsor of global radical Islamic jihadi movement. The world soon began to believe India and Pakistan was cornered. Even the US, acknowledged Pakistan’s dubious double role in the global fight against terror and stopped its financial aid to already economically crippled Pakistan. Due to aggressive Indian diplomacy, Pakistan began to lose friends even among the Islamic countries. Even global watchdog on terror financing and money laundering tightened its noose around beleaguered Pakistan.

Then India struck the biggest blow to Pakistan’s designs on Kashmir with a masterstroke on 05 August 2019. India’s decisive move took the winds out of Pakistan’s sails. Momentarily, Pakistan halted its policy of bleeding India. Thereafter, two things happened that emboldened Pakistan once again: the proposed US withdrawal from Afghanistan and the Corona pandemic. Enough has been written on how Pakistan has gained from both viz a viz its India policy. When the entire world is busy combatting the deadly pandemic Pakistan’s entire national strategy revolves around Kashmir and its financial survival. China, for its own strategic reasons and facing global isolation as spreader of corona, continues to support Pakistan. For Pakistan both Afghanistan and Kashmir are strategically important and sensing temporary victory in Afghanistan has diverted its resources and effort towards Kashmir. India can tolerate neither of the two because while Kashmir is its integral part, in Afghanistan ‘India has enough at stake’ strategically speaking.

The comparative calm in Kashmir from August to February, had unnerved Pakistan which could not do much due to the sword of FATF hanging over its head and its inability to muster global support against India as far as Kashmir was concerned. Shocked earlier by India’s pro-active response through surgical strikes and Balakot air strikes, the growing demand in India of reclaiming POJK had shaken the Pak political and military leadership. India has also successfully exposed Pakistan’s nuclear bluff through limiting India’s aggression well below the thresh hold and exploitation of a window that exists in between.

Sensing, the current summer season to be the last chance of keeping its hold over Kashmir, it has desperately upped the ante. The lease given by FATF, release of terrorist leaders and softened US stand has once again emboldened the Pakistan Army whose obsession with India as an existential threat has not diminished despite numerous reversals in the past.So far, 60 terrorists including top leaders and commanders have been killed by the security forces at the cost of 22 own martyrs. The worst two encounters have been in North Kashmir close to the LoC confirming involvement of Pakistan Army. The Black Saturday encounter which took place in the Rajwar forest of Handwara has shocked the entire nation because of the loss of five brave soldiers including a CO of a RR unit. In counter terrorist operations such temporary setbacks do happen and we should be prepared to accept an odd reversal among the many successes gained by our security forces.

The time has now come for Pakistan to bleed. Enough is enough. We cannot permit Pakistan this time to gain an upper hand in Kashmir or Afghanistan using terrorism as a tool. Pakistan is at its lowest ebb as far as economy and leadership is concerned. Pakistan is undergoing an internal power struggle amidst failing economy and growing pandemic. Pak Army is even planning to infiltrate corona effected terrorists across the LoC. How long we can remain at the receiving end of an ‘unequal war’? The nation is demanding that we should take the fight to enemy’s territory. We cannot always wait for the enemy to strike first. Let Pakistan bleed on its own soil.

The option of an all- out war is neither practical nor pragmatic due to the possession of nuclear war by both sides with the control of the weapons in military’s hands in Pakistan unlike ours. The cost of an all-out war will be prohibitive. It would be deadlier than the second world war/all the wars fought with Pakistan so far/ after effects of corona pandemic.

The situation is ripe in POJK. There is growing dissension among the locals against brutalities of Pakistan Army and step-motherly treatment of Islamabad. The Kashmiris are up in arms because their legitimate share of water is being diverted towards Punjab, they object to establishment of terror camps in their territory which invites Indian retribution and lately the establishment of quarantine camps for corona infected Punjabis in towns in POJK has literally shocked them. The simmering discontentment in POJK can be exploited to our advantage and act as a force multiplier.

The lessons learnt from Kargil war, raise the possibility of “Plan POJK”, after all the nation has vowed it to take it back and termed it as the only issue of discussion as far as Kashmir is concerned. After 05 August, the map of UT J&K shows the area as Indian Territory. Again due to logistics and terrain constraints capturing POJK in one season may not be feasible. Also, a major offensive launched by India may not also get necessary global support. The answer lies in adopting the “creep forward” or “gradual aggression” strategy since as per the norms “Takers are Keepers” on the LoC. Plans must be made to capture two to three important objectives across the entire length of LoC in every campaigning season by maintaining surprise as well as strengthening of own defences. Priority should be given to launch pads and infiltration routes.

While we take the battle to enemy territory we will also have to clean our own house as well. Along with the fight against terrorists, there is a need to renew our offensive against the vast network of terror sympathisers, over ground workers (OGWs)and the black sheep among the society. Surprisingly, the ascendancy gained over the terror support network during operation “All Out” has somehow slackened. It is a well- established fact that complete victory over terrorism cannot be achieved without total annihilation of its support network.

Time to teach Pakistan that “those who live by the sword die by it,” is now and we should not dither in our response. The Indian nation is endowed with brilliant strategic minds. Any other befitting strategy to bleed Pakistan must be welcome and implemented. The desired end state is “Pakistan has to bleed NOT India.”

(The author is a Jammu based veteran, political commentator, columnist, security and strategic analyst. Mail: anil5457@gmail.com).