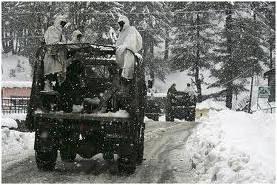 A recent family drama played out in the Kashmir valley has once again put focus on the issue of the security paradigm in Kashmir. One Mohammad Yasin Mir son of Abdul Hamid Mir resident of Utiko, Kunzar in the Kashmir valley had a tiff with his family and chose a novel way of getting even. He rang up a friend of his in the evening and said that he had been detained in an army camp and was being tortured. The harried parents, at once, went to the local police station even as the news spread like wild fire in a manner that is possible only in the valley. Within no time people were out on the streets baying for the blood of the Indian army. Ultimately, after much hue and cry and with active support of the army the errant boy was found in the house of his uncle in Shirpora, Pattan.

The news was carried by some major newspapers; as expected a certain segment of the media was quick to deride the army in a roundabout manner while being ambiguous about the actual facts. This sort of a one sided outlook, considered to be against all norms of journalism, is commonplace in the Kashmir valley which, in itself, is a misfortune for the trouble torn area. When media is not balanced what the people get to know is only half-truths and this does not augur well for a society trying to get over a traumatic situation.

It is a providence that the youth has been found safe and sound. Now, let us, for a minute, consider the unfortunate scenario of something amiss having happened to him. The separatist camp would have lost no time in organising bandhs regardless of the cold or complete lack of evidence to implicate the security forces; the media would have played up the situation with a number of talk shows and discussions dominated by stringent voices of the separatists, the government of Jammu and Kashmir would have done what it does best – ordered an enquiry followed by a tweet by the Chief Minister reiterating his hare brained idea of partial revocation of the armed forces special powers act in the state. Come rain or sunshine, this is all that the worthy head of the state can think about.

A second critical point that comes in mind is the mind-set of the young boy who played out this drama. He seems to have had no compunction in using the name of the army for his personal agenda. He was well aware of the hue and cry that would ensue; evidently he had listened in to all the talk about the army’s atrocities against forced detainees and had taken motivation from this knowledge. It seems that the incessant talk of disappearances’ has become embedded in the minds of the growing generation. Attention also needs to be directed towards the common man who, despite the existing scenario of normalcy, continues to harbour misgivings. The problem is that he is not being allowed to move on, how can he get over these troubled thoughts when he has a plethora of political parties and human rights organisations available to remind him of them day in and day out? Over here the failure of the government in removing these fears from the minds of the people is quite palpable

The state government had put the number of missing persons at 2300 but on hind sight it has concluded that 894 of these had joined militancy. One wonders as to how the government gets to reach to such magic figures and having done so why it has not declared the names and addresses of these people. It would be best to come out in the open, declare what is there to be declared and list out the action being taken to set things right. Sadly there is a catch here, doing something like this would remove the ambiguity that can be exploited to wield the stick on the security forces every now and then; hence this is not a very useful option.

This is not a commonplace incident to be brushed off as the prank of somebody with a vibrant imagination; it is deadly serious since it involves the smooth functioning of a very important segment – the security forces. The incident, therefore, merits intense debate to understand the cause and effect of such allegations. More so since they have been happening and can continue to happen all the time. This is something that puts the security forces on the back foot for no fault of theirs and negatively impacts the overall security of the very sensitive region. One would have expected the national media to debate this point and some statement from the Home Minister, always very quick to talk about the separatists and their cahoots simply because it makes good copy.

It is a blessing that the Kashmir valley is witnessing a modicum of normalcy after many decades, this situation has to be nurtured so that it can gain a firm footing. The best way of doing so is to strengthen the trust and the bond between the security forces and the people. In this particular case, a good situation would have been if the family, absolutely sure that the army will not do a thing like this, would have approached the nearest camp. Undoubtedly, the army would have joined with the police in searching for the boy and had he actually been in a serious situation for any reason he would have had better chances of being saved. It is only when trust like this is forthcoming that the situation in the valley will actually be deemed to be normal. Thank God all is well with young Mohammad Yasin, however, now is the time to concentrate on the larger picture.