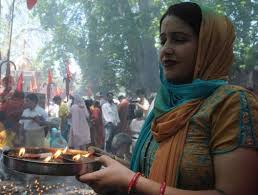 The festival of Kheer Bhawani is celebrated by the Pundit community of the Kashmir valley every year on the eighth day of the Jyeshtha month of the Hindu calendar (that falls in the month of June), at the holy Temple of the Goddess Ragnaya Bhagwati (One of her many names), in village Tula Mula, Ganderbal about twenty kilometers from Srinagar city.

During the days when foreign sponsored terrorism was at its peak the festival was celebrated furtively. As the security situation improved, successive governments motivated Kashmir Pundits to visit Kashmir and celebrate the festival. The trickle of a few years back increased steadily and this year has witnessed congregation of thousands of Kashmiri Pundits now settled across India and the globe. The proceedings provide ample proof that the age old secular fabric of the region and its composite culture, popularly defined as the philosophy of Kashmiriyat, has outlived vicious attempts by foreign powers to break the ageless Kashmir valley civilisation.

The Kashmiri Pundits were accorded a hearty welcome by their Muslim friends in Kashmir whom they had not met for tens of years. Reports suggest that many from the two communities were seen engaged in earnest conversation, oblivious of the surroundings as they attempted to relate their lives and times in the short period available to them. The people wanted to wash away the painful memory of the exodus and the horror that followed.

Even more poignant was the reaction of the younger generation. School going Kashmiri Muslim girls came from far off areas to look after the visiting Kashmir pundits. They served the devotees with water and refreshment and went to the extent of looking after their shoes. Many of the girls were meeting the Kashmir Pundits for the first time. Their actions proved that their parents and elders had spoken to them about the community that had been so close to their hearts and girls had, in-absentia, developed affection for the uprooted community.

It was quite evident that even after decades of indoctrination through the use of force, foreign sponsored terrorists, their ideologues and masters have failed to break the bond that has existed between the religious communities in Kashmir since times immemorial.

What is it that binds the Kashmir people together in a manner that dispels all attempts to tear them apart? Kashmiriyat is the word being used to describe this philosophy in the modern context. The word, however, finds no mention in the written history of this ancient land; this is because the concept evolved in such a smooth and seamless manner that no need was felt to describe or define it. It is an ancient tradition that continues to be followed without any questions being raised. While India and the rest of the world has been trying to build and strengthen secularism in an increasingly divided world, here is a regional group of people who have lived the secular concept for millenniums and are unwilling to shed it under the most difficult and challenging circumstances.

This unique and highly civilised culture was the offshoot of visionary thinking of religious saints revered across the land by one and all. Prominent among the saints was Lal Ded also called Lalla Arifa by the Muslims. She combined Islamic and Shaivite thoughts to create a bridge between all communities. The vision of Lal Ded was carried forward by a great Sufi mystic, Sheikh Noor-ud-Din, also called Nand Rishi, whose shrine in Charar-e-Sharif is the most revered place of pilgrimage for the entire Kashmiri community including, not only the Muslims and the Pundits, but also Kashmiri Sikhs and Buddhists. Sheikh Noor-ud-Din could quote from the holy Koran and the Bhagwat Gita with equal ease. Kashmir valley is called the land of Sufis and saints because of the high number of mystics who have graced the region along with the two luminaries mentioned above; all of them were secular in thought and action.

In the Kashmir valley people may pray to different Gods but they also have s a lot many Sufis and saints in whom they believe collectively. For a visitor to Kashmir it would be difficult to differentiate between a Kashmiri Muslim and a Kashmiri Pundit; they look alike, dress alike, speak alike, behave alike, eat the same food, sing the same songs and even pray together; there are no separate Muslim and separate Pundit colonies in Kashmir. Such is the cultural homogeneity between the communities. Both Hinduism and Islam in Kashmir have a distinct Sufi tinge with many common religious practices quite different from the forms followed in the rest of the sub-continent.

Kashmiriyat is an off shoot of historical developments over many centuries. Before the foreign sponsored holocaust in the early eighties there was no recorded religious riot or difference of opinion between the two as also other communities inhabiting the region. Such is the strength of this concept that it is refusing to die despite sadistic and dishonorable attempts by inimical foreign forces.

Coming back to the Kheer Bhawani festival, the thousands of Kashmir Pundits who had congregated at the Temple heaved a sigh of relief when the water of the holy spring came out with a milky tint as is the tradition. Joining them with relief at the auspicious tidings were the Kashmiri Muslims best replica rolex who had got to dread the red hue and brackish content of the holy water seen at the time when the regions fabric was shattered and destroyed by foreign sponsored terrorism.

Having failed to implement their nefarious agenda through the medium of the gun, inimical forces are trying their level best to break the social fabric that is reinventing itself spontaneously in the Kashmir valley. A serious attempt will be made to spread hate and divide the two communities as they take steps to reinvent their historical integration. It is up to the Kashmir people to give a befitting response to such evil machinations.