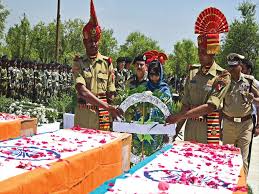 A terrorist strike in Anantnag District of Kashmir on Saturday, June, 4, led to the killing of a Sub-Inspector and a Constable of Jammu and Kashmir Police. A day earlier, two BSF soldiers were killed in a terrorist attack on their convoy at Bijbehara also in Kashmir.

Earlier on May, 3, two unarmed traffic policemen, an Assistant Sub Inspector and a Head Constable were gunned down by terrorists. In a separate incident the same day, another policeman was killed by terrorists and his weapon taken away.

It is quite evident that terrorists are striking at Policemen and Paramilitary Forces personnel as a part of the new strategy dictated by their masters across the border. Killing of policemen by terrorists has resurfaced after almost three years.

Considering that a predominant strength of terrorists operating in Kashmir presently is of indigenous stock, the situation can be interpreted as a “Kashmiri killing a Kashmiri in Kashmir.”

The police force, in particular, is quite concerned and unsettled by this turn of events. When the terrorist movement was controlled by foreign mercenaries the attacks on the Police force were understandable, but under the current circumstances they are incomprehensible and very disturbing.

While there is a lot of talk about Kashmir going on the brink all over again and the possible replay of the situation of the 1980’s and 1990’s, what is more critical, yet unaddressed, is this fast paced polarisation of the otherwise very cohesive Kashmiri community.

The present day divides are on the lines of moderates versus radicals, separatists versus mainstream, Shia versus Sunni, employed versus unemployed, civilians versus government servants – the permutations and combinations are infinite.

In this, the simple Kashmiri is now a lost entity, an almost extinct species. The Kashmir Pundit, a refugee and sufferer of many years standing is nowhere in the reckoning.

Problems of corruption, bad governance, lack of economic opportunities, unemployment and bad infrastructure are not specific to Kashmir alone. They are prevalent in other parts of the country in the same if not a larger degree. In fact, most of the world is grappling with the same problems.

In other parts of the country and the world, people grapple with the problem while leading a normal life. In Kashmir, propaganda is applied by inimical forces to play up these issues in such a manner that gullible youth are indoctrinated into becoming terrorists due to a misplaced ideal of “changing the system.”

The misfortune is that those who take to the gun do not realise that they would be hurting only themselves and their own people and not anybody in Delhi or the rest of the country or the world. If this small point strikes home, a lot many problems will get resolved.

It is time for the people of Kashmir to introspect, to look at reality in the face and to be honest with themselves.

The state government has been elected by the people themselves. It holds a majority of functionaries from the Kashmiri Muslim community. Under these circumstances of virtual self rule with a more than ample economic support from the centre, there is no plausible reason to be dissatisfied. While the government in a democracy has to be pressurised to deliver, there is no case for the hatred for authority that some in the valley are propagating and many seem to be inclined to follow.

Deep within, the Kashmiri people are quite enamoured with the government. It is for this reason that a government job is the most sought after. There is no family in Kashmir which does not seek a government employee as a groom for its daughters. Recruitment rallies of the army, paramilitary forces and the Jammu and Kashmir Police witness a riot like situation with thousands of applicants.

Many of those who do not get a government job take to the gun and become terrorists. Then they attempt to kill their companions and compatriots who got the job that they were also vying for, especially so, those who join the police force. This comes across as a case of “grapes being sour.”

They do not for a moment pause to think that they could also have been similar targets had they been slightly more lucky or accomplished and that they are committing a sin and a crime against their own friends, kith and kin.

Kashmiris need to understand that in the modern world entrepreneurship is more lucrative than a government job that most are obsessed with. The cream goes for the private and corporate sector. They should also follow the same pattern and build on their entrepreneur skills.

The first step in this direction would be to invite business into their region. When the government recently attempted to attract investment through the medium of the new industrial policy, it met with stringent opposition. Such an approach is both duplicitous and hypocritical. One cannot have his cake and eat it too.

Kashmiris should also realise that governance will not be very different even if the region gets the so-called Azaadi that a few disgruntled and sold out elements are clamouring for. In fact, things will get much worse without support from the Government of India.

Kashmir now needs to be liberated from such Kashmiris who are not ready to put in a honest day’s work and earn a honest living through hard work; such Kashmiris who are allowing themselves to be lured into a criminal existence; such Kashmir’s who are cynical, self serving and have an anarchic bent of mind. Normalcy in Kashmir is standing on the brink; it just needs to be given a slight push.  Should the mothers and elders of Kashmir bring about a change in the thought process of the younger generation, the dream of normalcy will be fructified in not time.