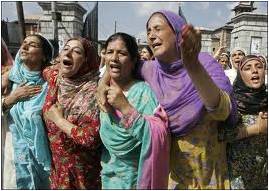 If we see the history of last three decades, we find that insurgencies have died down as quickly as they erupted, leaving large scale destruction of human and economic sources, pushing the states back for many years in their journey towards development and better living conditions for their people. What happened to Punjab in eighties and early nineties? And what did the violence achieve over there except bringing misery to many families of local population and that of security forces? Punjabis suffered both materially and mentally. Many people have still not come out fully from the trauma of having lost their near and dear ones. Their mental health is beyond healing. Once the violence was over in early nineties, people began to spend their energy constructively and the leadership of the time too realized the futility of pursuing any utopians aims. It started being realistic. It started working towards peace and prosperity. Present day Punjab countryside is dotted with palatial houses, all villages are linked by concrete roads; every house has twenty four hour electricity. Outside investments followed in education with new Universities (Lovely University, Chitkara University & others), new professional colleges and modern private schools suddenly rose along the highways. People began enjoying the cultural events, festivals and marriage ceremonie. Could one imagine this change in Punjab of the eighties. It happened because people realized that a few messengers of violence sponsored from outside were dragging them back when the world was marching ahead. When such a model is existing next door for the Kashmiris to emulate, do they still have to experience the agony of violence pursuing someone else’s dream.

Slightly back in history we can see the state of Mizoram, once a hotbed of insurgents Youth fled into the jungles; elders, women and children were huddled together in make shift villages, relocated along roads; their own houses either deserted or burnt down. The administration was totally headless and bankrupt; people were living in pathetic conditions. When better sense prevailed they made peace and progress followed. If anyone now visits that state he would find happy, healthy, and cheerful faces; all houses well lit and well connected; schools and churches full of life. The children are now educated and aware; they are pursuing their studies and various professions in most of the metros of our country; earning well, living well. Should Kashmiris not be looking at their example for their own good. Just next to Mizoram, the Naga’s of Nagaland have started making overtures for peace.

Do we need more examples to prove that violence begets violence and when the chain reactions starts, no one knows who started it in the beginning; always blaming the others for state of affairs. What did LTTE achieve for its people except two decades of bloodbath? Was it the only way or were there other options. Who benefitted?. There is a need to learn and grasp what is good for us today? It is time for Kashmiris to learn from other people how they have come out of the chaos they once found themselves in, either because of their own choosing or by the design of others. How the people in the other states took charge of their destinies and finally said no to the forces which wanted them to continue on the same path. How people of other states chose their own agenda for the good of their children, for the health of their elders and for the safety of their families.

The changes which have occurred in the world in the last century did not happen in many previous centuries and similarly the changes which have occurred in the world in the last decade were much more than the changes which occurred in the last ten decades. With these changes in communications, media, internet, intermingling of communities and cultures taking place, there is a fresh whiff of youthful aspirations, to pursue their dream in civilized ways. People are abhorrent to restrictive and bonded social conduct. There is freedom and tolerance in the air; giving space and respect to each other, letting each flourish to its heart’s content. More and more opportunities are getting created for everyone to work honestly and to live a decent life. Creating and fermenting of insurgencies are no more workable as they bring nothing but misery to the people. Only by shunning violence, Kashmiris can meet their social or political goals.

Another factor which is playing important role in shaping the future systems of governance is globalisation. Globalisation entails integration, cooperation, pooling of resources, being complementary to each other for mutual benefits without harming interests of others. Violence or insurgencies run counter to these forces of globalisation because they entail disintegration, being separatist, evolving independent identities, being different, raising new borders and boundaries. It is a fact that forces of globalisation are much stronger as they are being led by mutual needs of the developed and developing worlds. Forces of globalisation are sweeping across borders and boundaries by way of trade, technology, communication and migration of people from one corner of the globe to another for seeking education, work and for simply exploring new lands.

The forces of disintegration led by insurgencies in small parts of big nations are too weak and fragmented to face the forces of integration and are therefore doomed to destruction and dissipation. They can only spread desperation and despair in the little corners of the world and that too far a very short period of time; inflicting more injuries or hurt to their own communities whom they profess to protect. The outside forces which support these insurgencies are also realising the fact that when you put fire in your neighbour’s house, you are also likely to put your own house on risk. So at this juncture of history Kashmiriswe must think rationally and practically and must to make the best of what the country and the world can offer.