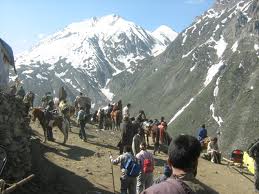 The peaceful culmination of the Shri Amarnath Yatra and a successful tourist season has done wonders for Kashmir. More than six lakh pilgrims have visited the holy Amarnath cave this year, which is an all time record and much in excess of projections; tourists both national and international have made a bee line for Kashmir and yet another record 5 lakh plus visitors have enjoyed the salubrious climes of the valley. Most were domestic tourists and have left with promises to return with even larger parties, such has been the display of the famed Kashmiri hospitality. As a result, gone is the despondency which has plagued the people of Kashmir for more than two decades now; today one is confronted with eager faces looking at a bright future in an environment which gives positive vibrations. All of this is the result of positive policies of the State and central leadership and relentless/ongoing effort of the security forces, not to forget the enduring aspiration of the people to put the shadow of violence behind them and work for a brighter future. Today peace and security is maintained, students are attending classes regularly and even coming out to play games, business is thriving, projects to generate growth are meeting deadlines and other parameters of governance are in place.

The Government is seized with the challenge to provide peace, negate divisiveness and accelerate development. Chief Minister Omar Abdullah has said “You give me peace, I will give you employment, development and prosperity”. This needs to become the new mantra of the Kashmiri society. Having witnessed the fruits of normalcy, it is now up to the people to assist the government in performing its duties in the manner expected. If the government is distracted from its objective by frivolous issues or non issues, raised by those who do not have the good of Kashmir in mind, then the pace of development will be negatively impacted which is not desirable. Give peace and chance and then see the results.

Every Kashmiri has to make a contribution in order to maintain this momentum. The lead has to be taken by the political leadership of the region, more so since it is the ideological contradictions amongst the leadership which are the main cause behind the divisiveness and disruption which plagues the society at regular intervals. Politicians with contradicting views complicate matters. The time has come for the Kashmiri leadership to shun divisive politics and focus on the well being of the people. In accordance with the desire of the people, the leadership needs to follow the path of good sense and moderation.

The government at the centre had taken a step forward to resolve the vexed problems being faced by the State. It had appointed a panel of Interlocutors to engage all segments of society and come up with recommendations to address all problems. The interlocutors have kept all doors open; yet some parties have refused to interact with them. By so doing, they have missed a golden opportunity to place their viewpoint on record and in perspective. In any case, everybody has a right to express an opinion in a democracy and this right must be exercised in full measure. The offer for talks should be exploited rather than creating a situation where all doors are closed. Even now, not much is lost; in case these political forces are ready to reach out they will not find the interlocutors wanting.

Kashmiri’s are exponents of democratic tenets they have, forever, maintained that their problems cannot be resolved by the gun; they have always rooted for a spirit of brotherhood, mutual trust, democracy and the ability to understand each other point of view. They have displayed an abhorrence for terror which should go as a signal to all those who are attempting to break the fabric of this ancient civilization for personal benefit. Such forces should realize that Kashmir is no longer ready to become a pawn for their evil intentions.

Kashmiri’s are doing very well in the international circles especially in the academic and business sectors. In case they get an opportunity in their own soil they will change the face of society. Considering the pace at which the environment is changing in the Valley, the day is not far when this opportunity will be theirs for the taking. In the meantime, they should make whatever contribution that they can to reduce the suffering of their brothers and sisters who have for long witnessed scarcity and deprivation for no fault of their own and assist them in charting out a course for progress. They must share their vast experience liberally with their less fortunate brethren. The time has come to save the next generation from devastation and the onus of this most important task lies on the Kashmiri people alone.