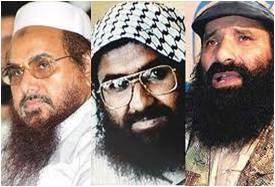 Notwithstanding all the peace and tranquillity that nature has gifted to Kashmir, its saga remains peppered with frequent episodes of violence. In fact, violence has become so much a part of the psyche of the common Kashmiri that talking about it, witnessing it, experiencing it and even extolling it are things that he has begun to take in his stride. One may argue that this attitude is perhaps essential to survival in the extenuating circumstances that the Kashmiris have been dwelling in during the last two decades of their life but, at the same time, one must realise that being inured to violence is not a good sign. It is indicative of a retreat into barbaric times when the values of modern day civilization held no meaning. Such an attitude brings to naught all the progress that our society has made. Doubtless, such a state of affairs needs to be soundly put down.

This state of violence is sustained by an aura and a feeling that has been created in the minds of the people of Kashmir. The tendency of some people to constantly harp on the unrest that is supposedly prevailing in the valley of Kashmir, issue controversial statements that add to this unrest and then use the opportunity to grind their own political axe adds to the idea of violence. Such acts result in building and propagating a mental image of violence in the valley that, in actual, may be more hype than reality.

Sallahudin whose only claim to fame is being a self-styled leader of Jehad in Kashmir. He boasts of a large number of Mujahideen ready to move into the streets of Kashmir to liberate the valley. He has given an assurance that the infrastructure to create violence and mayhem in Kashmir is in place. He gives the example of Iraq and Afghanistan to drive home his point that success is simply round the corner. No doubt, Sallahudin dwells in a world of his own, he is completely divorced from reality and has no inkling of the severe beating that totalitarian and radical regimes the world over have taken. Or else he takes the people of the valley for a set of absolute nincompoops who will lap up all the venom he is spouting purely because it is anti-India.

In his this nefarious design of his he is, of course, assisted by political personages like Syed Ali Shah Geelani and some others. It goes without saying that even these so called leaders who surreptitiously or at times openly support secessionists like Sallahudin have their own narrow agendas to achieve. These could range from something as simplistic as playing to the gallery to win public favour to something as convoluted as extracting financial aid from the Central Government by holding unrest in this region like a stick on their head. What these people do not realise is that the common Kashmiri is sick of violence and is in no mood to be taken in by this empty rhetoric. He has realised that the way forward lies in peace and development. He has also realised that staying integrated with India is the best option for Kashmir.

In fact, there is no dearth of men from Jammu and Kashmir who have laid down their lives for the sake of integrity of Jammu and Kashmir with the Union of India. Naib Subedar Chuni Lal from 8 Jammu and Kashmir Light Infantry (JAK LI) is the best example of such sons of the soil. A resident of Doda District, he is the most highly decorated soldier having been conferred with the Ashok Chakra (Posthumous), Vir Chakra and Sena Medal for separate acts of gallantry. The Ashok Chakra came while he was involved in foiling an infiltration bid at Kupwara in Kashmir. The operation was successful due to the sacrifice of his life. JAK LI is one amongst many other infantry regiments which draw their manpower exclusively from Jammu and Kashmir and whose history is replete with such acts of bravery for the cause of the Nation. Chuni Lal comes from the same battalion as Naib Subedar Bana Singh who has been awarded with the Param Vir Chakra, the highest gallantry award in India. Very recently, another brave Policeman of the State, Special Police Officer Barkat Ali, has been awarded the Shaurya Chakra for having killed two dreaded terrorists of Lashkar-e-Toiba despite having sustained grievous injuries on his own person. Such is the mettle of the people of Jammu and Kashmir whom the likes of Sallahudin are trying to influence through vicious propaganda..

“India colonising Kashmir” and “Kashmiris versus the rest of India” have no longer got any mass appeal for the people in Kashmir. Politicians who are looking towards contentious issues to garner votes should now realise that this particular cow can no longer be milked. On the contrary, the possibility is that people who keep raking up such issues would be labelled as being on the pay roll of foreign masters.

For a set of leaders ostensibly seeking autonomy for their land, however incredible the proposition, there can be no greater ignominy than being branded as stooges of another power. It would therefore only be in the interest of all mainstream parties of the state to realise that if they are seeking a political future of any length of time they need to talk of issues that have more relevance for the common man of Kashmir. These are issues like employment, development, social and civic infrastructure. More than this, they need to denounce the likes of Syed Sallahudin as enemies of the people of Kashmir since this is a fact that the people know and acknowledge. It is time the leaders also realise which way the wind blows.