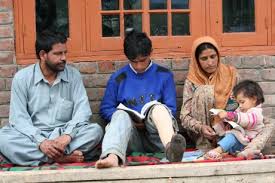 Dr Simrit Kahlon
 The Jammu and Kashmir State Board examination for class 12 students has commenced on Monday, March, 14. In spite of media speculation of a poor response to this dynamic decision taken by the State Government, a massive 94.53 percent attendance for the first exam has been recorded. Of the 32,044 students expected to appear 30, 292 turned up for the examination.

It  may be recollected that due to the turmoil that the Kashmir Valley has witnessed in the past few months, the state government had decided to hold the class 10 and 12 examinations twice – once in November with 50 percent syllabus and then again in March 2017 with the remainder 50 percent syllabus.

The unprecedented attendance has taken the wind out of the sails of the separatist and divisive narrative that has been projecting alienation of the young school going boys and girls as the reason behind the unrest and strife in the valley.

It has now emerged that the young community of students is more interested in pursuing education than in pelting stones and imposing lock-outs, as had been projected all through the turmoil by both the separatists and a major segment of the media.

The young boys on the streets pelting stones were, quite obviously, a miniscule portion of the school going section of the valley. These boys had been misled by some evil and malevolent forces and given monetary incentives to carry out the stone pelting and other anti-people activities. An overwhelming majority of the school going segment was perturbed with the closure of their schools and have hastened to cover up for the lost time as soon as the situation has eased.

The examination is being held under a massive security umbrella due to a threat perception of disruptive elements resorting to violence to foil the process.

Those taking the examinations and their parents are well aware of the security risk involved, yet, they have done so for the sake of their future.

The inability of the media to read and report the situation correctly also stands highlighted. Whether this is done due to plain and simple ignorance or with a vested interest is something that needs to be given a deep thought.

It needs to be reiterated here that irresponsible reporting based on wrong perceptions can cause immense harm to the nation. It should be curbed with determination. The government should also crack down heavily on such information conduits that are spreading misinformation to generate anti-national sentiment.

The hollowness of the claims and postures of the Hurriyat Conference stand exposed yet again. The situation highlights the irrelevance of the conglomerate in the Kashmiri society that is focussed on peace, progress and prosperity.

The people of Kashmir are fed up with the regressive policies being forcibly imposed upon them by the separatist agenda of the Hurriyat conglomerate. They are well aware that the separatist are towing the line of their Pakistani masters, which spells disaster for the common man.

Hurriyat fructifies its agenda on the basis of a tremendous amount of foreign funding, which facilitates the hiring of goons and miscreants to create disruption. Sadly, the public has been getting cowed down by blatant use of muscle power.

Now, it seems that water has gone above the head of the common man. The outright attack on the future of the children was the last straw. It hit a core value of the people who are very particular about educating their children and empowering them to compete with the best in the world. They are not willing to allow disruptive forces to take away this dream from them. By making their children sit for the Board Examination the people have given a clear message to the Hurriyat that it can go this far and no further.

The people have gone a step further by openly accusing the conglomerate of being party to burning of their shops and other commercial property. Voices against the policies and modus operandi of the Hurriyat are gaining momentum by the day. The time is not far when it will attain a crescendo.

At the same time the people are grateful to the Army for having taken an initiative to re-start the education process by opening up the Army Goodwill Schools to hold evening classes for such students whose schools had been burnt.

As the students started attending the schools, the government gained confidence to announce the examination dates amidst a lot of opposition from the disruptive forces. The result is there for all to see.

It is time for the Hurriyat leadership and the other divisive forces operating in the valley to read the writing on the wall. They have to understand that the people are completely rejecting their agenda. Their survival, therefore, depends upon bringing about a change in their policy and ideology and attuning the same with the true aspirations of the people whom they profess to represent. An inability to do so will lead them to political hara-kiri.

The government, on its part, needs to ride on the positivity that has been so courageously exhibited by the people and ensure that quality education through regular classes is provided to the children so as to make them competent enough to realise their dreams and aspirations.

As the tide turns in the trouble torn region, there is a need for everyone, be it the people, the central and the state government, the security forces, the Indian army et al, to put in whatever they can to ensure that the education situation never again deteriorates to the level that it went down to in the preceding fateful months.

(Dr. Simrit Kahlon is an academician and expert on J&K)